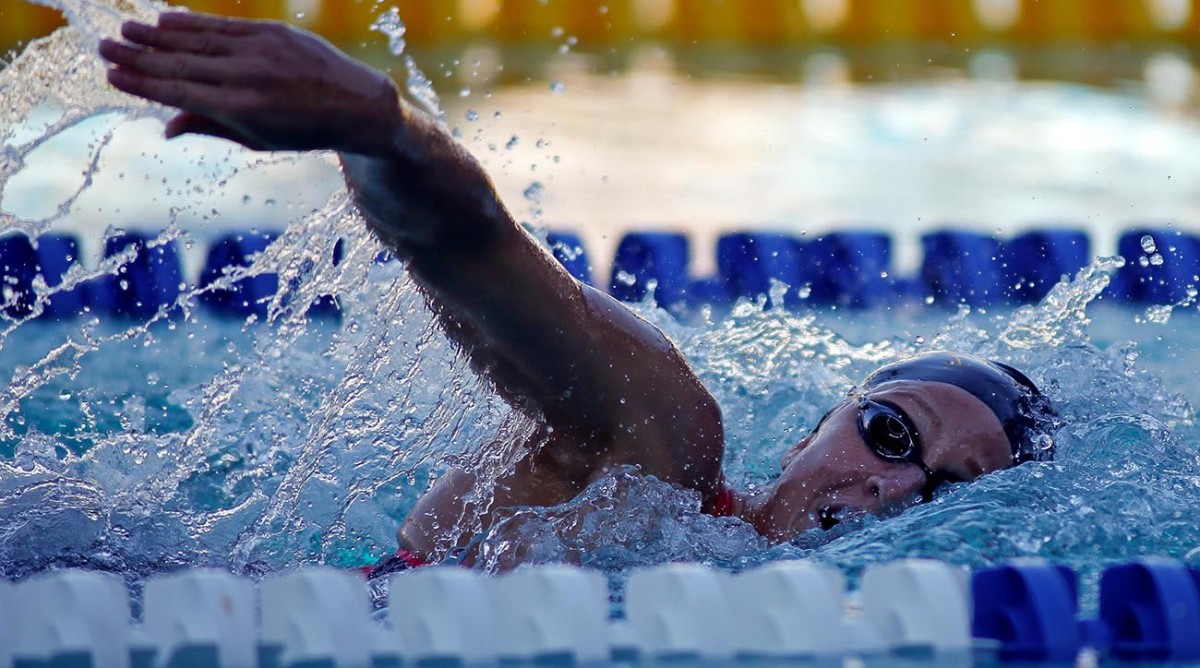 Madisyn Cox’s side gig of the moment is crafting handmade greeting cards and selling them on Etsy. It’s a therapeutic pursuit as much as anything, a way to release stress from a life of high-performance swimming and academic pursuits.

Among her creations are a series of cards that just say “Thankful,” themed for all seasons of the year. They are an artistic representation of Cox’s stubbornly positive outlook, which has been monumentally tested on more than one occasion during her swimming career.

The most recent test was delivered Tuesday, when the Tokyo Olympics were officially postponed to 2021. For three years since graduating from Texas, the U.S. national team member had put her medical school aspirations on hold to chase the Olympic dream, and now the dream has been deferred again. Possibly for good.

That has put Cox at yet another career crossroads—not the hardest one of her career, but not easy by means.

“It was a punch in the gut, it really was,” said Cox’s mom, Sandy. “She was a mess. I think she felt she did everything right, and then all your fine-laid plans are gone.”

The one-year delay caused by the coronavirus pandemic will absolutely change the makeup of the U.S. Olympic team from what it would have been in 2020. Some athletes on top of their game now will not be able to replicate that in 2021. Some new faces will emerge. Some, who had carefully choreographed everything toward a final big summer before moving on, must now regroup.

Cox has been accepted to three med schools to date and is holding an acceptance at Texas’ McGovern School in Houston. She’s also waiting to hear from her top two choices: Stanford and the Mayo Clinic.

Instead of enrolling in one of them in late summer, she plans to ask for a one-year deferral—maybe. That depends on the timeline for Tokyo 2021. If the Games are scheduled late enough in the summer to conflict with the start of med school, she will either have to ask for second deferral, ask for a late start to the semester, or retire.

“I was very upset,” Cox said. “I took a moment for myself and cried it out. But that was more of a selfish response—it was the right decision.”

Once the International Olympic Committee made its decision, Cox eventually made hers. She found a Texas alum’s backyard pool and got back in the water. Devastated on Tuesday, thankful by Thursday. For now, the Tokyo dream remains afloat. That response is how Madisyn Cox is wired.

In 2016, Cox finished fourth in both the 200-meter and 400-meter individual medleys at U.S. Olympic Trials. That’s an incredible achievement, but only the top two finishers go to the Olympics. Since then, the plan had been in place: shoot for Tokyo in 2020, then enter medical school thereafter.

The top American IMer, Maya DiRado, had retired. So had Olympians Elizabeth Beisel and Caitlin Leverenz. Nothing is guaranteed over the course of an Olympiad, but Cox’s opportunity was clear and present.

In 2017, she won a bronze medal at World Championships in the 200 IM and a gold as part of the 800-meter freestyle relay. Everything was progressing as planned into a momentous 2018.

That summer was a big one for American swimming—the national championships would select teams for both the 2018 Pan-Pacific Championships and the 2019 World Championships. It was a year to start clarifying the race to make Tokyo.

Then the phone rang in March 2018, almost two years ago to the day.

Cox received devastating news: she had tested positive for a banned substance. The positive test for Trimetazidine—categorized under hormones and metabolites—came out of nowhere. She’d been tested 20 or more times, both in-competition and outside of it, without a positive. This didn’t make sense, but the findings were backed up by both her A and B samples.

For a long time, the result was known only to FINA, the governing body of international swimming, Cox’s family and her coach at Texas, Carol Capitani.

“I was still able to swim [while awaiting a FINA ruling],” Cox said. “But none of my teammates knew. I went to practice every day without knowing if I’d ever be able to compete again. I didn’t know why, but I thought maybe this was a sign that I was supposed to give it up.”

An academic high achiever, Cox broke down trying to prepare for spring semester finals that year at Texas. For the first time as a collegian, she bombed a test. The phone conversations with her mom were keeping her afloat, but only barely.

“She would call and say, ‘Mom, I can’t do it,’” Sandy Cox recalled. “I told her, ‘You don’t have to get through the rest of the day. Just get through the next hour. Write down what you have to do and do it.’ That was much tougher than what she’s going through now.”

Behind the scenes, Cox was vigorously proclaiming her innocence. But without being able to offer evidence of where the “unfathomably low” amount of the drug came from, FINA had little choice but to suspend her. That’s despite an anti-doping panel finding her to be “an honest, very hardworking and highly credible athlete who is not a ‘cheat,’ and also said that they believed her testimony to be true.”

A potential four-year suspension was reduced to two years, based on her character. The bombshell news dropped in late July, not long before U.S. Championships: Cox would miss that meet and would not be able to make a U.S. international team for 2018 or ’19. She couldn’t compete again until 2020, during the run-up to Tokyo qualifying.

The world of Olympic sports is rife with eye-rolling at claims of innocence from alleged PED users. Most of them were not believable. But Madisyn Cox testing positive? That didn’t make sense to anyone who knew her. Teammates and competitors alike voiced support for her.

Still, the outside world looked and applied the label: another drug cheat.

“You can only control your own narrative,” Sandy Cox said. “But for somebody to make a judgement about your kid when they know absolutely nothing was hard to take.”

The Cox family went to work investigating potential sources of the drug. They hired lawyers. They hired a world-renowned expert on contamination. They hired an expert on hair analysis from France. She took a lie-detector test.

“You do the right thing and the rug gets pulled out from underneath you,” Sandy Cox said. “We wanted to defend her reputation.”

Cody Cox, Madisyn’s father, is a radiologist who makes a good living in Lubbock, Texas. But the expense of building a legal defense was considerable.

The most likely potential sources for the drug: food, water, or doping by a stranger. When none of those turned up anything, Sandy Cox thought of something—Madisyn had taken the same multivitamin since her junior year in high school. What about testing those?

The test showed traces of Trimetazine in the bottle of Cooper Complete multivitamins Cox had taken at the time of her positive test. Lawyers then accessed other bottles of the vitamin that were made in the same batch, and they also had traces of the drug. The ingredients the company used to make its vitamins at that specific time had been contaminated.

Presenting the evidence to Court of Arbitration for Sport, Cox had her suspension reduced from two years to six months. She still missed U.S. Championships and the international meets that were selected from those results, but at least her name was cleared and her path back to competition was set. (The Cox family has sued an affiliate of the supplement company that makes the vitamins.)

After being cleared, Cox had a solid 2019 season. She believed she was hitting her stride and rebuilding her confidence here in 2020 leading into Olympic Trials.

The top four American women times in the 200 IM over the last seven months are tightly bunched, all within .28 seconds of each other. Cox is one of those four. It was shaping up to be a brawl for the wall in Omaha in June. In the 400 IM, 2016 Olympian Melanie Margalis had separated herself from the pack, but there is a large group all with similar times behind her—Cox prominently included.

After she stopped crying on Tuesday, Madisyn Cox took refuge in books. She read two of them that day, one of them titled, Occasional Magic. It’s a collection of true stories about people overcoming adversity.

“It’s kind of serendipitous that I was reading that at the time,” she said. “It kind of put things in perspective. People go through a lot worse than having the Olympics postponed a year.”