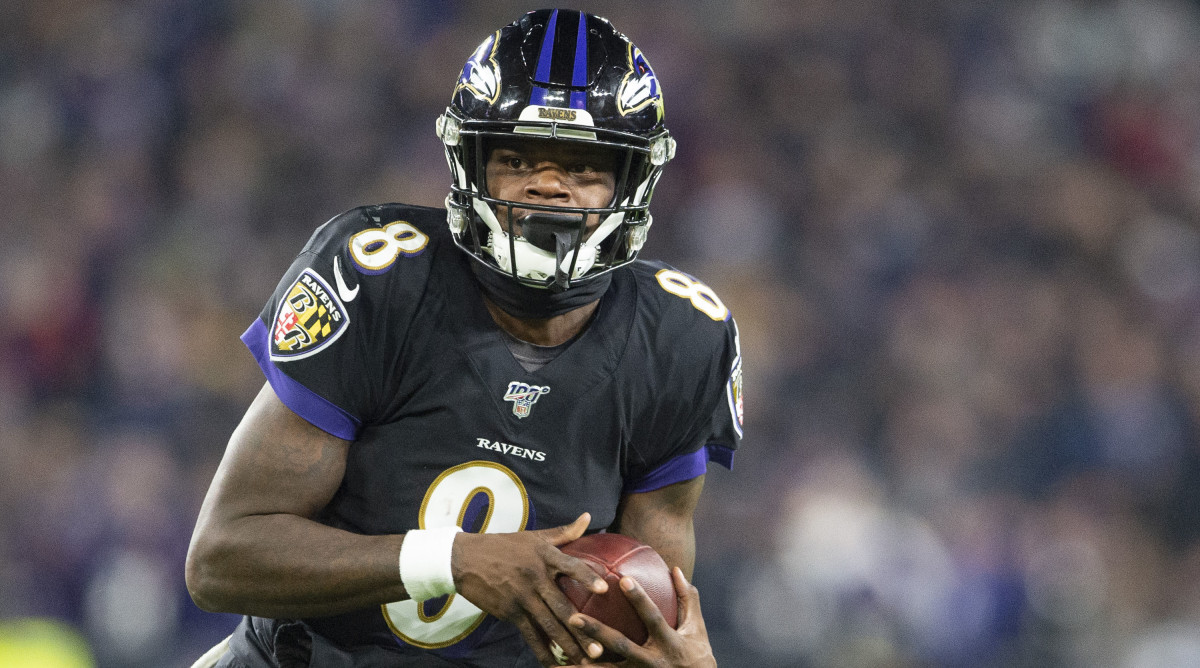 Reigning MVP Lamar Jackson has quickly become one of the NFL’s best players. Last season, the 23-year-old threw for a league-leading 36 touchdowns against only six interceptions and he amassed 4,333 total yards (3,127 yards passing, 1,206 yards rushing). In doing so, the 2016 Heisman Trophy winner thoroughly demolished the perception that he couldn’t cut it as a quarterback in the NFL.

Jackson’s rapid ascension on the field has been matched by a surge in popularity. During the last month of the 2019 season, Jackson’s stardom generated the NFL’s number one selling jersey. Unlike other NFL stars, Jackson has eschewed endorsements with major footwear and clothing companies. He has instead launched his own brand, Era 8 Apparel, and also used trademark law to protect marks associated with his name.

It’s safe to say that the “face of the NFL” for the foreseeable future will be shared by two young and supremely talented quarterbacks: Patrick Mahomes and Jackson.

In a world of imitations, false endorsements and counterfeit goods, Jackson has reason to protect the value of his fame. That fame will provide him millions of dollars long after his playing career ends. And if Jackson fails to stop businesses from selling products that incorporate his identity and that do so without his permission, his brand will be diluted and Era 8 Apparel will lose sales.

On Wednesday, Jackson turned to a federal court in Fort Lauderdale to protect the value of his popularity. In a complaint drafted by attorney Mitchel Chusid and filed in the U.S. District Court for the Southern District of Florida, Jackson charges that Amazon (and its partner company, Amazon Services) has engaged in the “deliberate and unauthorized use” of Jackson’s name, image and persona. Jackson demands a jury trial. His case will be heard by Judge Roy Altman, a former federal prosecutor whom the U.S. Senate confirmed to the bench last year.

Jackson asserts that Amazon has unlawfully infringed on his right of publicity in connection with alleged “false advertising and endorsement of unlicensed and infringing articles of clothing.” These clothing items incorporate names and slogans that are commonly associated with Jackson:

These items have been taken down on Amazon.com, though they can be seen through caches and are detailed in trial exhibits. Jackson contends that Amazon is advertising, marketing and selling these “infringing items” in ways that deceive consumers into believing that he endorses them. Jackson maintains that he has nothing to do with these items and never consented to their creation, manufacture or sale. He argues that Amazon is trying to “commercially exploit [his] celebrity and notoriety” without his consent or that of the NFL.

Jackson also emphasizes that some of the clothing items listed are not merely sold by independent third parties who happen to sell their goods through Amazon. Some are marketed as “shipped and sold by Amazon.com.” Amazon offers third-party sellers a “Fulfillment by Amazon” service where goods sold by third parties are stored in Amazon warehouses and shipped out. Jackson therefore asserts that the world’s largest online retailer is directly responsible. Amazon, Jackson says, is “pirating” his right of publicity and “blatantly exploiting” his fame. Along those lines, he maintains that Amazon is trying to “confuse and deceive” consumers by implying he is somehow connected to the sales.

Jackson’s complaint repeatedly stresses his football achievements and unique talents. For instance, it notes that he is “widely accepted and known as one of the best dual-threat quarterbacks ever to play in the NFL.” The complaint also describes Jackson’s “unmatched ability to “run like a running back” and at the same time “throw touchdown passes with the accuracy and acumen of elite quarterbacks.” In sum, the complaint declares that Jackson “has changed the quarterback position at every level of the game.”

These depictions are not mentioned to boost Jackson’s ego or make teams regret letting him slide in the 2018 NFL Draft (they already regret it). The depictions instead help to establish potential monetary damages: if Jackson wins the case, the more valuable his brand and the more money he’d receive for the misappropriation of his brand. In that same vein, Jackson maintains that sales of his online store for Era 8 apparel have decreased because consumers have purchased unauthorized merchandise instead.

Jackson’s legal claims rest largely in the right of publicity. This right centers on protecting a person’s identifying characteristics from misappropriation and infringement. There is no federal right of publicity. Its scope and strength vary by state.

In Florida, the right of publicity is both codified in a state statute and reflected in court decisions. In sum, it bars commercially using a person’s name, likeness, portrait, photograph and related identifying traits without that person’s permission. Jackson insists that his right of publicity has been violated by products sold on Amazon’s marketplace. These products, Jackson claims, blatantly use his name, likeness, slogans and image without his consent.

In addition, Jackson asserts that Amazon has breached his rights under Section 43(a) of the Lanham Act. This section forbids false advertising and false endorsements. Jackson contends that the use of such slogans as “Action Jackson”, “LaMarvelous” and “Not Bad for A Running Back” in unauthorized products give the false impression that he endorses them. He argues that consumers are likely deceived or at least confused as to whether he is associated. Jackson also invokes the Florida Deceptive and Unfair Trade Practices Act. The Act makes it illegal for a business to engage in a dishonest commercial practice. Here, Jackson asserts the sale of unauthorized goods associated with his identity is dishonest and hurts his marketability.

Jackson demands three core remedies. First, he wants Amazon to be ordered to provide an accounting of all sales of the items in question. Second, Jackson asks Judge Altman to issue an injunction that would compel Amazon to refrain from using his identity and publicity rights without permission. Third he seeks compensatory and punitive (punishment) damages from Amazon. These damages would be determined by a jury if it found Amazon liable.

Attorneys for Amazon will answer Jackson’s complaint and likely dispute some or most of its purported facts. A complaint is not a neutral retelling of facts. It is an advocacy document. Amazon will have an opportunity to offer a different set of facts that will likely contradict those offered by Jackson. It will be up to evidence and testimony to determine which side has a more persuasive story to tell.

To that end, Amazon might attempt to distance itself from the products mentioned in Jackson’s complaint by claiming it is not their true seller. In doing so, Amazon would need to explain the meaning and boundaries of the phrase, “shipped and sold by Amazon.com.” This phrase is seemingly consistent with Amazon retailing a product. Meanwhile, Amazon might note that while it offers customers a limited set of guarantees when using Amazon to order from a third-party seller, those guarantees are not assurances of the intellectual property of third-party goods.

In addition, Amazon could address the qualities of the disputed products. The company might highlight that none of the products actually say “Lamar Jackson” or contain an image of him. The references are mostly based on slogans. However, one product, a football pullover hoodie, includes in its name the phrase “Action Jackson.” It seems pretty clear that’s not a reference to the 1988 film of the same name starring Carl Weathers, Craig T. Nelson and Sharon Stone. Also, it’s hard to imagine the “LaMarvellous vintage Baltimore QB Jackson MVP T-Shirt” being about someone other than Lamar Jackson. That’s particularly the case when the product description expresses, “the dynamic QB and future MVP is in his own class of marvelous. Perfect for the next football game tailgate in Baltimore!”

The First Amendment could also supply a defense. In right of publicity cases, defendants can argue that the use of a celebrity’s identity was for legitimate entertainment or news purposes. While that type of defense might be helpful if the disputed products involved the sharing of biographical information about Jackson, or unique analytics or insights about his performance, the sale of apparel likely doesn’t quite fit.

Jackson’s case could take time to play out. Like courts across the country, the Miami federal district court has issued restrictions that might slow litigations in hopes of keeping people safe and helping to curb the coronavirus disease pandemic. Also, like most civil litigation, the odds are heavily against Jackson v. Amazon going to trial. The two sides will probably work out a financial settlement. We’ll keep you posted.