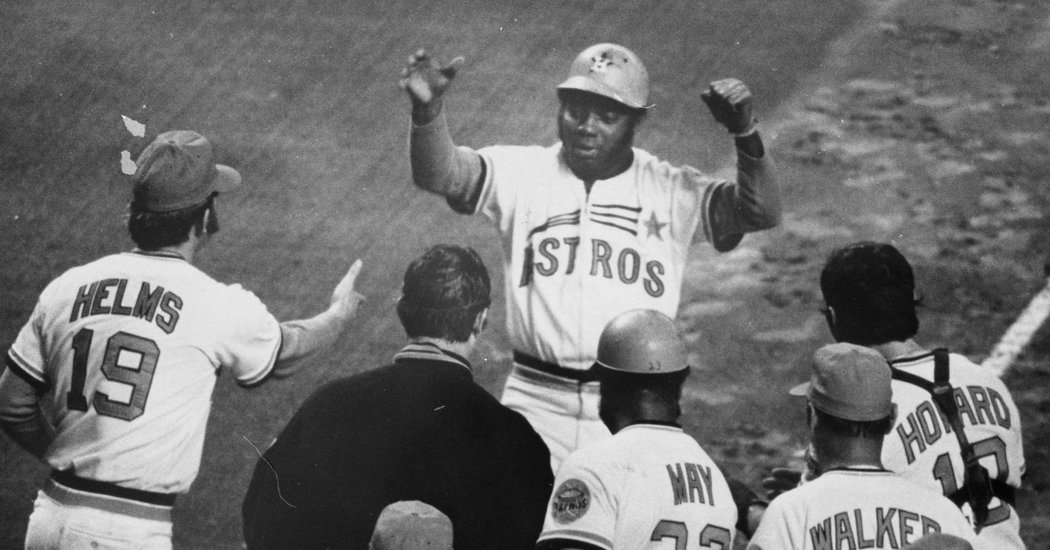 Jimmy Wynn, the diminutive Houston Astros slugger whose monster home runs in the 1960s and ’70s earned him the nickname the Toy Cannon, died on Thursday in Houston. He was 78.

The Astros announced the death but did not provide further details.

Wynn, a three-time All-Star, was just 5-foot-9 but packed with power. He hit more than 30 homers twice with Houston, including a career-high 37 in 1967, second in the National League that year, despite playing his home games at the cavernous, pitcher-friendly Astrodome.

At his death he was working in the Astros’ front office as a community outreach executive. He was often was seen around the ballpark interacting with players and fans alike.

“Jimmy’s success on the field helped build our franchise from its beginnings,” the Astros said in a statement. “After his retirement, his tireless work in the community impacted thousands of young people in Houston.”

Two of the long home runs for which Wynn became known were particularly famous.

The first came on June 10, 1967, when he knocked one out of Crosley Field in Cincinnati, over the scoreboard in left center and onto the highway outside the stadium.

Almost three years later, on April 12, 1970, he became the first player to hit a home run into the upper deck of the Astrodome when he sent a pitch from Phil Niekro of the Atlanta Braves more than 500 feet down the left-field line.

Wynn spent his first 11 major league seasons, from 1963 to 1973, in Houston. (The team changed its name from the Colt .45s to the Astros during that time.) He later played for the Los Angeles Dodgers, the Braves, the Milwaukee Brewers and the Yankees in a career that lasted 15 years.

Wynn’s No. 24 jersey was retired by the Astros in 2005. He was inducted into the inaugural class of the Astros Hall of Fame last year.

He was honored by the franchise in 2011 when the Jimmy Wynn Training Center, a state-of-the-art baseball facility, was opened at the Astros Youth Academy.

James Sherman Wynn was born in Cincinnati on March 12, 1942, and attended Central State University in Wilberforce, Ohio. He made his major league debut on July 10, 1963, at 21 and hit four homers with 27 R.B.I.s in 70 games that season.

Wynn played in his only World Series in 1974, homering for the Dodgers in a five-game loss to the Oakland A’s.

Information on his survivors was not immediately available.