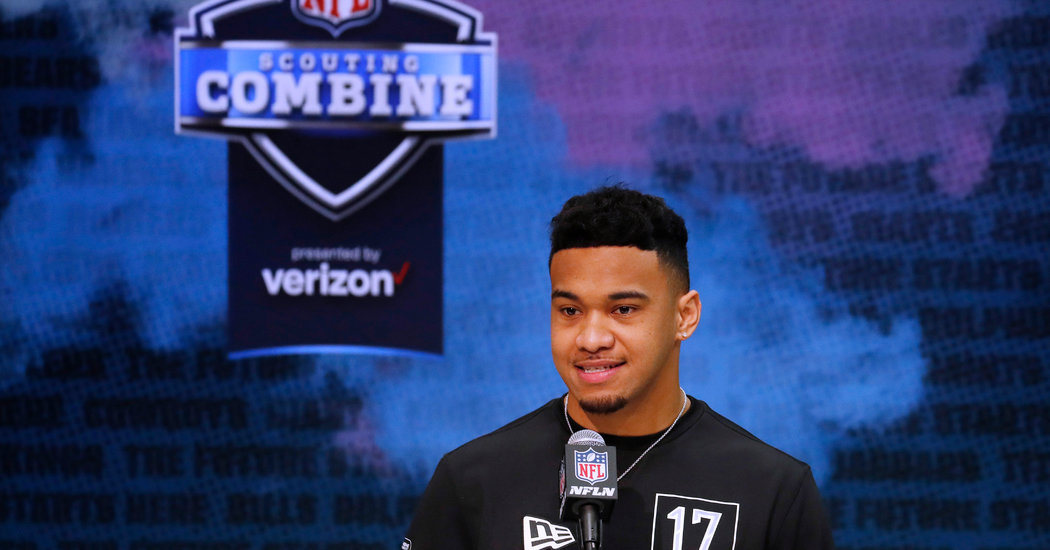 The coronavirus pandemic has upended much, but with a late summer start to the season five months away, the N.F.L. has been one of the few major professional sports leagues to avoid postponing or canceling games.

With little else going on in sports, the league has doubled down on holding its annual three-day draft — which ranks behind only the Super Bowl as the N.F.L.’s biggest spectacle — beginning on April 23, altering only the broadcast, which will now be a TV-only studio production with top picks participating remotely.

The N.F.L. is sticking to its self-imposed calendar even as the league instituted travel restrictions and ordered team facilities closed, forcing teams to adapt all-important evaluations that will impact their fortunes for years to come, causing worries that draft selections might go lower or higher than their available research would support.

“When we look back at the draft in two years, we’re going to see guys who were overdrafted because of their familiarity and guys who were under drafted in later rounds or not at all because they hadn’t been seen or were injured,” said Mike Tannenbaum, an ESPN analyst and a former N.F.L. general manager.

Social-distancing restrictions intended to contain the pandemic have forced team scouts and general managers to work from home. Team doctors cannot conduct physicals for prospective draft picks. And above all, team executives must forgo vital face-to-face conversations with prospects that are typically held on college campuses or at a team’s headquarters.

Teams, of course, had already spent countless hours on the road, scouting the top 100 or 200 prospects. Scouting personnel attended college games, spoke to players’ coaches and families and watched at all-star games and the league’s scouting combine in February, a weeklong event that includes brief player interviews.

But success in the draft is often determined by the use of late-arriving information or the unearthing of minute details that elevate unheralded players to late-round picks. Often, talented players that are overlooked visit team headquarters to give skeptical coaches a chance to size them up.

That’s what the Jets did in 2007 when they brought in Darrelle Revis. He entered the draft after his junior year, and coaches on the Jets had questions about his talent because he played at Pittsburgh, which was then in the Big East, a less prominent football conference.

But when Revis visited the Jets, the team’s personnel were impressed with his knowledge and devotion to the game, as well as his close relationship with his mother, which signaled that he had a good support network, said Tannenbaum, who was the Jets general manager at the time.

He quickly became one of the league’s top cornerbacks.

Teams are doing without those visits this year, instead relying on phone interviews with players, and their coaches, families and friends, and watching yet more game tape, trying to find new ways to assess hard-to-qualify personality traits, such as players’ level of narcissism, openness to criticism and new ideas, and interaction with team personnel.

“Sometimes, you want to see someone in an uncomfortable situation and see how they react, and in person, it’s always easier to do that,” said Scott Pioli, a CBS Sports N.F.L. analyst who worked in player personnel and as a general manager for the Patriots, Chiefs and Falcons, among other teams. “The intangibles are really very tangible.”

Many of the people who make these widely watched picks say they have been unable to do their jobs properly, and question whether even a stripped-down draft should proceed as planned. This stretch of the off-season has its own hectic cadence, including free agency and the implementation of the new 10-year collective bargaining agreement, which has increased roster sizes and minimum salaries. The new logistical hurdles related to the virus led a committee of general managers to ask Commissioner Roger Goodell last week to delay the draft, according to ESPN.

“This is not a fantasy draft that you conduct out there with just a list of things on a piece of paper,” Mickey Loomis, the general manager of the New Orleans Saints and a member of the committee, told the Peter King Podcast for NBC Sports. “There’s a lot of work that goes into it to prepare and there’s a lot of work that is done during the draft. Listen, it’ll be very, very difficult to conduct that and do it in a way that you’re doing justice to the process.”

Complicating matters, the N.F.L. Physicians Society said in a letter to the league and players union that team doctors would no longer examine players, forcing teams to find other doctors to provide physicals. “At a time of the most serious pandemic in our lifetime, we believe medical resources should focus on those who are ill or in need of care,” said Dr. Anthony Casolaro, the president of the society and the Washington Redskins team doctor.

The difficulty in finding doctors and the inability to hold workouts has forced teams to sign players contingent on their passing a physical. Teams have been unable to fully assess free agents as well as college players like Tua Tagovailoa, the Alabama quarterback who had a season-ending hip fracture in November.

“You have to adapt,” said Les Snead, general manager of the Los Angeles Rams. “This can be a stressful time, but the organizations that handle the stress best will win.”

Despite these limitations, the N.F.L. is forging ahead. In a memo sent to teams on Thursday, Goodell said rescheduling the draft would be difficult because it was unclear when a better date would emerge. The “public health conditions are highly uncertain and there is no assurance that we can select a different date and be confident that conditions will be significantly more favorable than they are today.”

Either way, it’s clear this year has been like none other in the N.F.L., disruptive in an entirely different way than the 2001 season, which began in the wake of terrorist attacks.

“September 11th was such an unsettling time because of what went on, but I remember a week later, with as much heartache as people had, they went back to work and tried to get the country going again,” said Rich McKay, the president of the Atlanta Falcons, who has been around the N.F.L. for more than 40 years. “This time, we don’t know the end date, which makes it more difficult.”