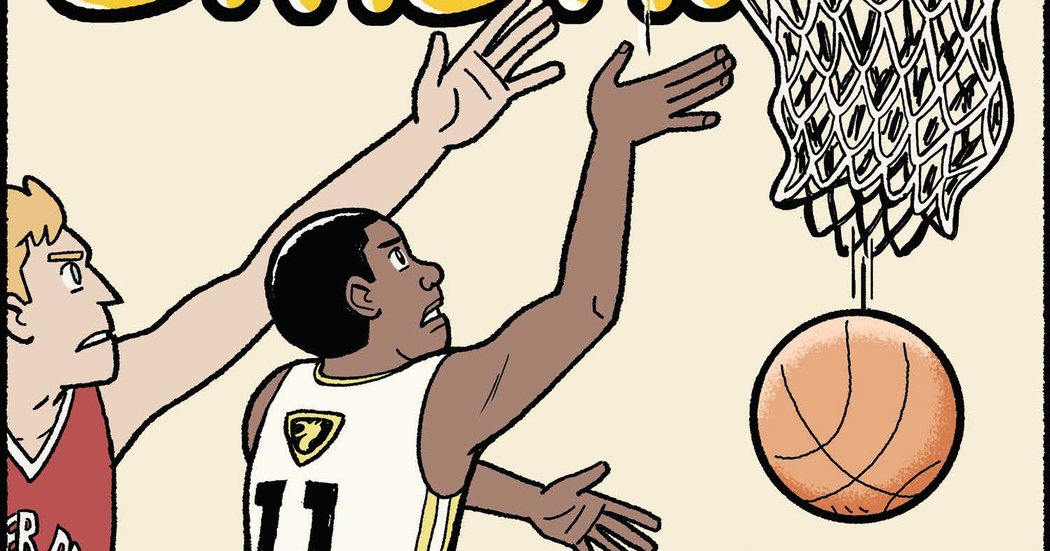 This month did not go as planned for Gene Luen Yang, whose first nonfiction graphic novel, “Dragon Hoops,” was released on March 17.

Because of the coronavirus outbreak, Lang canceled an eight-city tour in support of his book about a high school basketball team’s quest for a state title. Yang, 46, who once taught computer science at the school, Bishop O’Dowd High School in Oakland, Calif., interviewed coaches and players there and attended their games.

He spent five years researching basketball and the team, and became a fan of both. When the N.B.A. suspended its season after a player tested positive for the coronavirus, his reaction was maybe not the expected one. “I was shocked emotionally,” he said, “but not mathematically.”

The book, which Yang wrote and illustrated, features him as a character. It shows him wrestling with a decision to include a coach who had the most boys’ basketball coaching wins in the history of the school — and, at one time, in the state. But the coach left in 2003 after being accused of molesting a child in the 1960s. The charges were later dismissed after a Supreme Court ruling on statutes of limitations.

Yang recently answered questions about “Dragon Hoops” in a phone interview and in follow-up emails. The exchanges have been edited and condensed.

You did not have an appreciation of sports before you began this book, right?

It was more like an anti-appreciation. I was not an athletic kid at all. I had anti-talent. Basketball was the biggest area of intimidation. I was terrible at it. I would get hurt. I would get my fingers jammed or get a ball to the side of the head.

How did you come to write and draw “Dragon Hoops”?

Basketball had started invading my life in different ways. One way was through a bunch of books that came out. One was “The Crossover,” by Kwame Alexander. There were also some graphic novels and manga about basketball. I started reading those with my kid. He’s 16 now, but when he was in fifth grade, he joined the basketball team at his school. There was also “Linsanity.” As an Asian-American, I was just like, “Why do I care about Jeremy Lin?” But I totally did. The biggest thing was this conversation that was happening in the hallways of the school where I was teaching.

Was there a big learning curve in conveying basketball properly?

Totally. I mean, I still don’t totally get it. When I’m watching a game, there are still times when everything stops and something bad has happened and I don’t get why. What I understand now is the thrill of the sport. And I also really understand the importance of the sport within the context of American history: Immigrant communities or communities of color that could not afford to maintain a beautiful green field would gravitate toward basketball.

Was it difficult to decide which Dragons to include?

Incredibly difficult. They are all so fascinating. I knew Paris Austin and Ivan Rabb were going to be in the book because they are the stars of the team. Any time I saw something that resonated between what I was reading about in basketball history and a player that was on the court, it just lit up for me and I ended up including them.

Was there reluctance on anyone’s part to participate?

I feel like Coach Lou Richie and his staff put a lot of emphasis on character development, and it shows. So I never felt any pushback when I was talking to them about the games and the practices. But sometimes if I asked too much about their past, some of them would deflect a little bit. When they are on the court, that’s their public persona. That’s what they want everybody to see. But they want to keep a piece of themselves.

Were you worried about being able to convey the kinetic energy of the court?

Yes. I was totally freaked out about that. I didn’t know the game that well, and comics are a static medium. I think that’s a constant struggle for cartoonists. How do we get things that are actually still to feel like they’re moving? So I read “Slam Dunk,” by Takehiko Inoue, which is one of the most popular manga out there. I feel he portrays action really well. I looked at other sports comics. “Check, Please!” from First Second is a stellar example. “Fantasy Sports” is another one. Beyond that, I watched a lot of game tape. I was looking for key moments, and I would take those and exaggerate them.

You struggled with whether to include Mike Phelps, a former coach, in your story.

Coach Lou was the coach when I was following the team. His coach when he was in high school was a guy named Mike Phelps, who passed away last year. Mike was the winningest coach in California state history. He was forced into retirement because somebody accused him of acting inappropriately at the beginning of his career. It was a very confusing time for the community. The uncertainty and confusion continue to this day. His name kept coming up, and he had such a big influence on the program. In the end, I couldn’t leave him out.

Why are graphic novels beneficial to young readers?

Reading fiction is a great way of building empathy. Graphic novels should be part of every reader’s book diet. My hope is that a reader reads diversely, in every sense of the word “diverse.” That includes reading about a diversity of characters, but also reading a diversity of publishing formats. I think graphic novels have been excluded from the American academic system for decades for not a very good reason. It all kind of stems back to the 1950s, when people thought that comic books encouraged juvenile delinquency. It’s really just in the last decade or so that comics and graphic novels have been able to make their way back in.

Do you have any other feelings about the N.B.A. season being suspended?

One of the lessons I learned while working on “Dragon Hoops” is that sometimes we watch sports because we want a bit of that courage on the court to bleed into us. I hope the folks in the N.B.A. know the power they have in these uncertain times. I hope they find creative ways to reach out and inspire courage.

How did you approach your virtual book tour?

A book tour seemed trivial in the face of our current challenges. But I realized that there was a nobility in trying my best to live as normally as possible, especially when things are not normal. I have a role in society, right? I’m a cartoonist. So how do I fulfill my role in these new circumstances?

For every day I would have been on tour, I did a comic strip. I talked about what I would have talked about in my presentations, but I also talked about our current situation. My in-person book tour would have ended on March 21, so I ended my cartoon book tour on that day. Since then, I’ve been hosting March Math Madness on Instagram. Kids can figure out which team moves on to the next round by solving math problems.

It’s a strange time. We all have to figure out new ways to move forward, however small. This is a challenge to be creative.