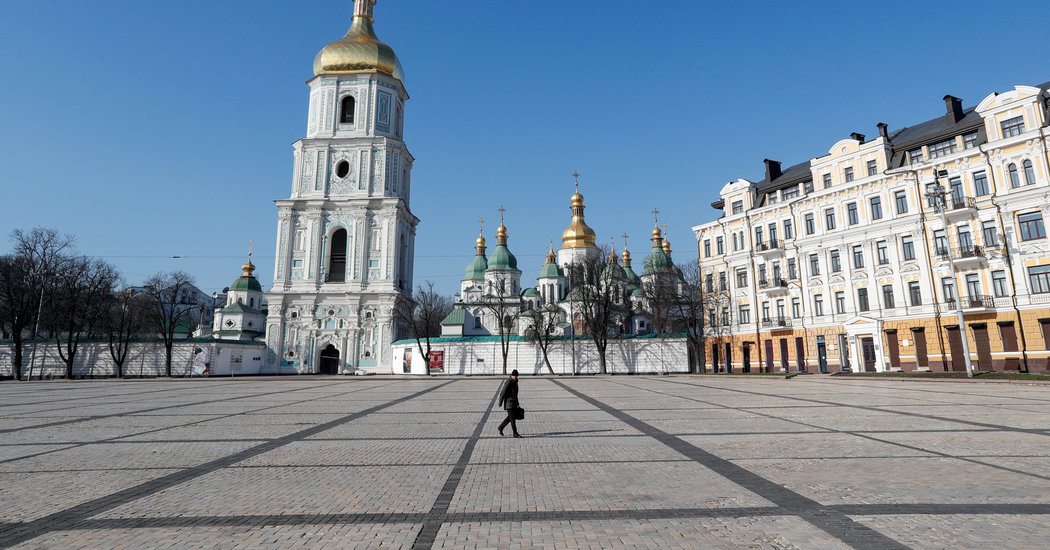 MOSCOW — A former prime minister of Ukraine said the country’s anti-corruption reforms are at risk of stalling just as the government has asked for a significant expansion in foreign aid to prop up the economy because of coronavirus shutdowns.

The Ukrainian government had already been deeply reliant on foreign assistance to halt Russia’s military intervention, an issue that became a focus of impeachment hearings in the United States last fall after President Trump withheld American aid. Now it is asking for funding because of the virus.

Much of Ukraine’s aid, including a pending $5.5 billion package from the International Monetary Fund, is tied to meeting anti-corruption benchmarks. Those have been slipping, putting assistance in doubt at a precarious time.

Oleksiy Honcharuk, the former prime minister, said in an interview that President Volodymyr Zelensky fired him and most of his cabinet earlier this month after he crossed the interests of a coterie of powerful insiders in the Ukrainian economy.

“Our dismissal I connect, most of all, with our systematic fight against corruption,” Mr. Honcharuk said of his understanding of why he was fired. “We interfered with a lot of people’s ongoing corruption schemes,” and “not everybody was happy with that,” he said.

Mr. Zelensky, a former comedian, won a landslide victory in presidential elections just under a year ago after promising to break the grip of the oligarchs, the insiders who have held sway over Ukraine’s politics and economy since the country declared its independence in 1991.

The broad public support was seen as Ukraine’s best chance in decades to sweep away the myriad schemes for stealing public funds. But Mr. Zelensky’s close ties to an influential oligarch, Ihor Kolomoisky, have raised suspicions that he might be susceptible to pressure.

Mr. Honcharuk said that Mr. Zelensky’s commitment to tackling corruption is now in doubt, and that the president had been pressured to dismiss the government earlier this month by negative coverage of its work on oligarch-owned television stations.

In a statement, Mr. Zelensky’s office praised Mr. Honcharuk’s cabinet for its “zero tolerance to corruption” but said it had not properly promoted legislation in Parliament or coordinated between ministries, and that it had failed to prepare for the coronavirus pandemic.

“Ukraine and its new government will not reduce the pace of struggle against corruption at all levels,” the statement said. “We guarantee our international partners that their loans will be allocated for the critical needs of Ukrainians, especially in such difficult times.”

The government will crack down on any misuse of funds, it said. “Plundering has never been so dangerous.”

The unraveling of Mr. Zelensky’s team could hardly have come at a worse time. Investors are fleeing emerging markets like Ukraine in favor of presumably safe assets like United States government bonds.

Mr. Zelensky on Monday asked the I.M.F. to double its lending program for Ukraine that was agreed to in principle last year but never implemented because the Parliament failed to pass a law to prevent politically connected oligarchs from siphoning off some of the aid through bank bailouts. The I.M.F.’s managing director, Kristalina Georgieva, said in a statement the fund was considering “larger access than previously envisaged,” if conditions are met. The United Nations also plans to spend $33 million to slow the virus’s spread in the war zone in eastern Ukraine.

This week, with the country already in lockdown to prevent the spread of the virus and amid warnings of a sharp recession, the new cabinet rushed a version of the bank bailout law to Parliament to pass in an emergency session.

“Developing countries are being hit directly and indirectly by the Covid-19 crisis and are going to need massive aid,” Kenneth S. Rogoff, a professor of economics and public policy at Harvard University, said in an interview. “So what to do about countries that are endemically corrupt and where a large part of aid gets siphoned off?”

Before his dismissal, Mr. Honcharuk had been replacing the boards of directors and managers of state-owned companies that he described as sources of graft for the elite, who use them to tap into the budget and flows of foreign assistance.

“Every one of these objects is a little breeding ground, a little hot spot, of corruption,” Mr. Honcharuk said in an online video chat from Kyiv.

The Ukrainian oligarchs grew enormously wealthy by controlling the management of the country’s 3,754 poorly run state companies through executives known as the smotryashchi, or the watchers. These are figures who ostensibly work for the state but in fact keep an eye on government assets to be sure their true bosses take a share of profits.

“The profits were privatized already; all the losses are on the shoulders of taxpayers,” Mr. Honcharuk said. With the system still in place, any money entering the Ukrainian budget risks leaking into foreign bank accounts.

These government concerns include giant banks, coal mines and natural gas and oil companies, but also smaller enterprises like a horse farm and something called the Potato Research Institute, which leases land.

Over all, Ukraine’s 100 largest state companies lost about $925 million in 2018, the latest year for which figures are available, according to Vox Check, a policy research group. That figure was nearly as much as the $1.2 billion Ukraine received that year in foreign aid, according to the Organization for Economic Cooperation and Development.

As a condition for its last major lending program, negotiated in 2015, the I.M.F. insisted Ukraine establish an independent anti-corruption law enforcement group, the National Anti-Corruption Bureau of Ukraine. That agency is now investigating suspected theft from state-owned companies totaling 18 billion hryvnias, or $660 million.

For at least a few months last year, for example, the electrical company powering Ukraine’s capital, Kyiv, seemed to have reversed the usual way of doing business: it was buying fuel oil at high prices and selling electricity on the cheap. Even more alarmingly, companies tied to Mr. Kolomoisky, whose television station had broadcast Mr. Zelensky’s shows and brought him to fame, were both selling the fuel oil and buying the electricity, a Ukrainian business newspaper reported.

In the middle was the state-owned electrical company, Centrenergo. The losses that piled up cost the Ukrainian budget — and, ultimately, the Western countries that prop up Ukraine financially, including the United States and European nations — more than $55 million for the first three quarters of 2019.

Donors to Ukraine’s Western-backed government are not eager to see aid effectively vanish into the business empire of Mr. Kolomoisky, rather than help with hospitals, unemployment benefits or the army that is still fighting Russian-backed separatists even as the virus epidemic extends its grip over the country.

Mr. Kolomoisky has denied in interviews with the Ukrainian news media any behind-the-scenes deal with the utility company’s new management, and said the price of electricity had fallen because of a nationwide electricity market reform. Mr. Zelensky has repeatedly denied being beholden to Mr. Kolomoisky, saying last year that he was not “a toy in Kolomoisky’s hands.”

A week before his dismissal, Mr. Honcharuk had tried to stem losses by firing the director of the electrical company. The director filed a lawsuit that allowed him to remain in his job. And then Mr. Zelensky fired Mr. Honcharuk instead.

For Svitlana Zalishchuk, a former member of Parliament and aide to Mr. Honcharuk, this sequence suggested a return to Ukrainian business as usual under Mr. Zelensky, despite the extraordinary need in Ukraine. She wrote of the country’s politics, “I don’t rule out Groundhog Day.”