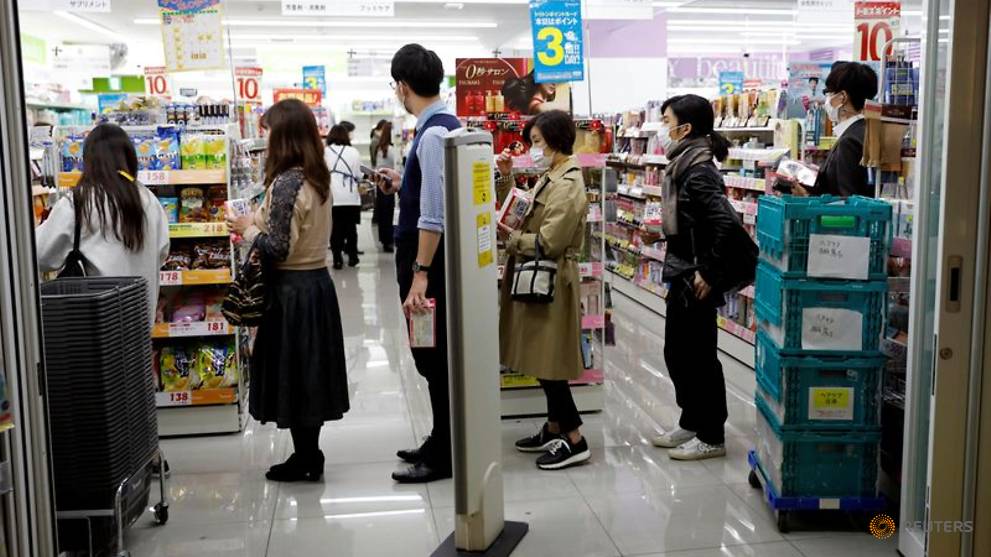 TOKYO: Queues formed at supermarkets and stores in Tokyo on Friday (Mar 27) as residents in the Japanese capital prepared for a weekend at home after the city’s governor called on them to stay at home to prevent the spread of the coronavirus.

After Governor Yuriko Koike’s plea on Wednesday to refrain from non-essential, non-urgent outings through Apr 12, and especially this weekend, residents were stocking up on everything from instant noodles and rice to toiletries and fresh produce, despite public-service warnings against hoarding.

In one residential neighbourhood, more than a dozen people lined up for toilet paper at a local drug store. One of them, an elderly woman, leaned on her walker as she held a 10,000-yen (about US$92) note in her hand.

Tokyo has seen a surge in coronavirus cases this week, reporting a record 47 cases on Thursday for a total of 259. While that’s not much for a city of nearly 14 million, experts have warned of a high risk of an “overshoot” – or explosive rise – given that more than half of the newest cases could not be traced.

Coronavirus infections have climbed to more than 1,400 nationwide with 47 deaths, excluding those from a cruise ship that was quarantined last month. Globally, infections are nearly at half a million people and deaths at more than 22,000.

Prime Minister Shinzo Abe is expected to order his cabinet to compile an economic package with spending worth US$135 billion or more, government officials and lawmakers say, joining global policymakers in rolling out fiscal stimulus to avert a downturn from the spreading pandemic.

Tokyo has not declared an emergency or a full-blown lockdown, and its streets were not as deserted as many European cities, where the coronavirus pandemic has forced residents to stay indoors by law.

But during rush hour around 8am, some subway lines in central Tokyo where commuters normally stand elbow-to-elbow were visibly less crowded, some even with empty seats.

A truck driver delivering toilet paper and tissues to drug stores around Tokyo said he’d been working 12 to 13-hour shifts every day for the past month – compared with five-day weeks of 9-10 hours before the hoarding began.

“It’s been tough,” he told Reuters, declining to give his name. “This job involves a lot of lifting, so I don’t know how long my body can last at this pace.”

Others worried about losing work as economic activity grinds down.

“They say we have to stay in but I’ll probably end up going out since otherwise I won’t make any money,” said taxi driver Takahiko Nihei.

“If I stay at home I’ll just worry about things: money, the virus, making a living. But if I get out and around, I can forget this for a while.”