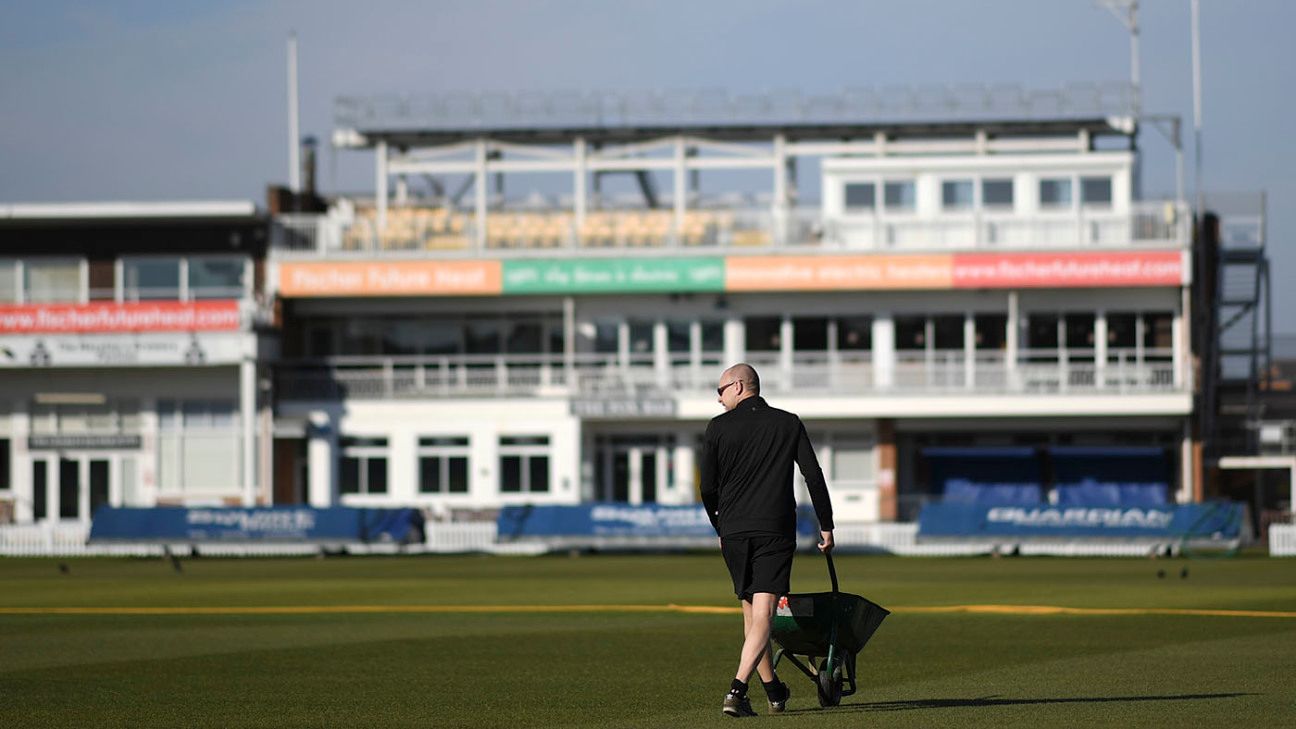 The COVID-19 (novel coronavirus) pandemic has led to the start of the English season being put back until at least May 28, and left many counties facing a potentially damaging shortfall in finances. How has your club responded to the situation? Here we will keep track of ongoing developments.

The club has been operating with a skeleton staff since first-team squad returned home early from tour of Zimbabwe. Reported record profits in 2019.

CEO Tim Bostock thinks that bigger counties are more likely to suffer significantly as a result of the crisis due to the fact a lower percentage of their income comes from the ECB, with events, conferences and hotels all contributing significantly in a typical year.

“They’ve got businesses that rely on income outside of ECB regular monthly funding – particularly I can think of Lancashire, Warwickshire and Yorkshire, the Ageas Bowl,” Bostock told talkSPORT. “They’ve done the right thing, they’ve diversified so that they can survive without ECB income, but what that has meant is… that has fallen off the edge of a cliff through no fault of their own. That is a major challenge.

“A club like Durham – a larger percentage of our income comes from the guaranteed ECB income as a result of the new television deal, and therefore we are much less exposed. I can confidently say that what’s coming in is more than what’s going out.

“We absolutely are in a position where we don’t need to lay anybody off, and we don’t need to reduce anybody’s salary. Rather than reducing headcount and making savings, we took the view that we would support [our staff].

The club have closed the Riverside to the public and non-essential staff, and also offered use of the ground to the local council and the NHS.

Executive directors have voluntarily agreed to a short-term pay cut of 20% and are in talks with local council to discuss terms of a loan repayment, among other measures.

“We feel these are exceptional circumstances,” chief executive Simon Storey told ESPNcricinfo. “We will find a way through this for Kent.”

Chief executive Daniel Gidney has issued a statement to members, signalling his intention to keep hold of staff where possible.

“We’re carrying that large staff payroll – when the turnover drops off like that and the phone just stops ringing, that has a catastrophic short-term effect on any organisation,” Gidney said. “We have some difficult measures to make, we have some cost-cutting to do, but we’re doing everything we can to protect our biggest asset which is our staff.”

The club had been due to hold its AGM on March 26 but, on legal advice, the meeting was opened and then adjourned until a later date. Staffing at Grace Road has also been reduced to “minimal levels”.

Leicestershire’s chairman, Mehmooda Duke, said: “We have an extremely hardworking group of staff and we have always built our own sense of cricket family, our own ways of working, and strong procedures over the years. Together, we have to keep the foundations of that family strong and work hard to support each other in every way we can.”

Alex Wakely‘s benefit year has been pushed back to 2021. “We’d put a lot of work into it and most of my events were ready to go and we were in a really good place,” he told the Independent. “But ultimately regardless of anything, I wouldn’t have felt comfortable doing it.”

Head coach Jason Gillespie has flown back to Australia, and is currently in self-isolation. “I get packages of supplies dropped off by my family,” he told the Sussex website. “I hear the doorbell ring and go to the door where I see the family standing 30 feet away.”

Players have been ringing elderly members to make sure they are coping with self-isolation. “The main takeaway we both took from the conversation was that perspective at times like these is really important,” said batsman Adam Hose after one call. “You have to take a step back and be really thankful for the things you do have.”

Announced on March 26 the decision to furlough “a large proportion” of staff. The club will continue to operate with a skeleton staff during the ongoing period of lockdown.

Chief executive Mark Arthur said: “At this unprecedented time, we have taken this positive step to protect jobs at the club. By taking advantage of the government’s coronavirus job retention scheme, we are able to preserve jobs at Yorkshire during such a difficult financial period.”