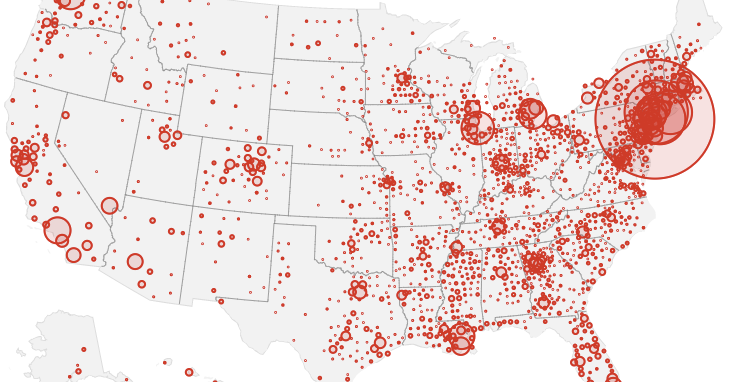 The U.S. braces for an onslaught

After erupting on the East and West Coasts, the coronavirus outbreak has made its way inland, threatening to overwhelm parts of the United States where medical equipment is in short supply and official guidance is sometimes contradictory.

In Louisiana, which may have the fastest-growing outbreak in the world, New Orleans is the epicenter. The city’s case count topped 1,100 on Friday, as speculation mounted among medical experts that last month’s Mardi Gras festivities had helped fuel the rapid growth.

Across the country, many cities and states with zero cases last month now face looming explosions: Chicago and its suburbs have nearly 2,000 cases; Detroit has identified over 1,000; and Milwaukee County, Wis., has reported 468.

Counties and cities outside of major urban centers have also seen striking numbers, as in Albany, Ga., whose population of 73,000 has been hit with more than 160 confirmed cases and 16 deaths.

Clashes between state and local leaders over how to respond, and mixed signals from the federal government, have complicated the situation. In states without formal restrictions, one mayor’s order to keep residents at home can be undermined by surrounding cities and counties without such measures.

The chaos of the responses could exacerbate another pressing issue: a severe, widespread shortage of medical supplies. In one survey, nearly 200 American cities, large and small, reported lacking face masks, testing kits, ventilators and other equipment needed to handle the crisis.

By now, you may be used to reading a constant stream of bad news. But here’s a reason to be cautiously optimistic: There are signs that strong isolation and intervention measures have slowed the spread of the virus in an early U.S. hot spot.

After cases started to grow in New Rochelle, N.Y., earlier this month, a one-mile-radius containment zone was put in place, the National Guard was called in, and widespread testing was adopted. Health investigators tracked down people potentially infected by a lawyer thought to have been the source of the spread.

Over the last four days, New Rochelle reported just 38 new cases to the county. State and local health officials cautioned that it was too early to declare victory, but it’s a significant drop — early on, the city saw more than 20 new cases a day.

“In the beginning, it felt like house arrest,” said one resident whose family was placed into quarantine. “But the punishment turned out to be a blessing in disguise. This is really a case of perspective.”

Looking for more good news? Craft distilleries are making hand sanitizer, for free. Doctors are finding creative ways to cope with shortages. Research on a vaccine is moving at breakneck speed. We rounded up bright spots amid the coronavirus crisis.

Life, and death, in northern Italy

Bergamo, Italy, is the bleak heart of the world’s deadliest coronavirus outbreak.

Once known as a quiet and wealthy province, Bergamo is now a place where Red Cross workers go door to door to carry away the afflicted, where the coffins are so numerous the army has been called to take them away.

Our correspondent Jason Horowitz and the photographer Fabio Bucciarelli have been reporting on the tragedy unfolding there. This photo essay is a look at the human toll the virus has taken.

Love under lockdown: Can I ship you a drink?

Around the world, the pandemic is radically altering approaches to love, dating and sex. A meme circulating on social media sums it up: “Can I see myself quarantined with him? Does he come with toilet paper?”

Lockdowns mean new togetherness for some but increased friction and conflict for others. Stuck indoors, millions of singles are turning to the internet for virtual yoga dates, digital drag queen karaoke nights and WhatsApp birthday parties.

The crisis has spawned a new lexicon, too. In nine months, we may see the first coronababies born. In a little more than a decade, they’ll be known as the quaranteens. Sadly, couples who can’t cope with the pressure of isolation could end up in covidivorce.

Take care of your lungs: If you are breathing polluted air, you may be at greater risk of catching the coronavirus and of having a severe infection. Here are some tips on improving indoor air quality.

Have better video meetings: Testing your tech setup and establishing a clear agenda can make your virtual calls with colleagues more productive — and less awkward. And follow these tips for looking your best on a webcam.

Try a new game: Our crossword columnist suggests five tried and true classics that will entertain both kids and adults.

I’ve been cleaning out drawers and finding emails and addresses of friends I haven’t contacted for years. I’ve sent notes in the hopes of reconnecting with friends from the past. I also sent my grown children notes letting them know how much I care about them. I’m in the process of setting up a time to chat online with a former colleague and friend I haven’t seen for nine years!