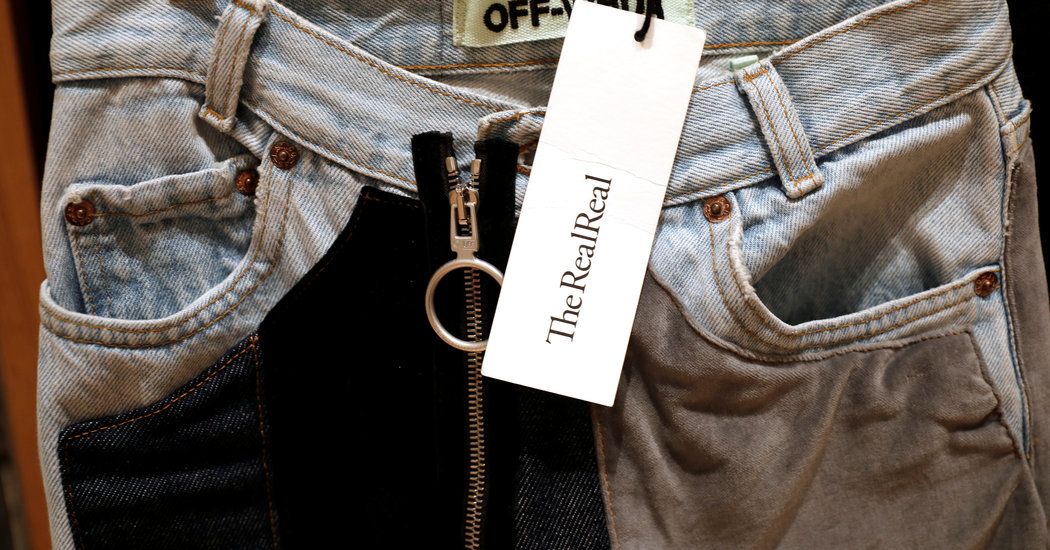 At the RealReal warehouses in Secaucus and Perth Amboy, in New Jersey, there is a backlog. Used designer clothing, handbags and all manner of accessories are waiting to be inspected for authenticity, photographed, then packaged and shipped when they’re eventually purchased online.

This is what the RealReal does: It gives another chance at life to secondhand Chanel flats, Prada backpacks, Burberry trenches. When it went public last year, the luxury consignment company was valued at more than $1 billion.

Last week, like every other fashion retailer trying to slow the spread of the new coronavirus, the RealReal closed its four stores, which are in New York, Los Angeles and San Francisco, in addition to its consignment offices and Bay Area headquarters. But in New Jersey, its e-commerce operations are still running. And there, some workers are feeling fearful and frustrated.

Four warehouse employees, who all asked to be anonymous out of fear of retaliation at work, said that protective measures haven’t been consistent at the warehouses. They want the facilities to close, even if it means losing their jobs.

“We’re scared to go to work,” one employee said.

As of this week, their concerns have resulted in a letter to the governor of New Jersey, Phil Murphy, and a modest social media campaign — instigated by friends of employees, but supported by strangers — to urge the warehouses to close. (The RealReal’s warehouse in California closed last week after the local county’s shelter-in-place order.)

In a statement, the RealReal said it is following the continuing recommendations and directives from government and public health officials. In New Jersey, the company has been in communication with local mayors and the governor “to ensure we are in compliance.”

“This is a tenuous time,” a company spokeswoman said. “We have been working tirelessly to not have a reduction in staff and to keep our team gainfully employed.”

The company began giving such responses around March 17, when criticism of its continued operations began appearing on social media. Frustrations spiked on Saturday, when Governor Murphy ordered all New Jersey residents to stay home.

Under the executive order, essential retailers including pharmacies and grocery stores were allowed to remain open, along with service centers like banks and laundromats. Nonessential retail businesses had to close.

Other businesses were told to let employees work from home if possible. If workers couldn’t do their jobs at home — if they were lab researchers or janitors or warehouse workers, for example — their companies were asked to cut staff to the “minimal number necessary to ensure that essential operations can continue,” Governor Murphy’s office said. The RealReal has said it has reduced its New Jersey work force to less than 15 percent of its usual staff.

But it was the word “essential” that particularly riled some of the RealReal workers in Secaucus and Perth Amboy.

On March 24, an employee submitted a letter to the governor’s office via its website. In a copy she provided to The New York Times, the employee quoted the governor: “Only if we need you out there, only if you’re an essential service in which case we do need you; otherwise, stay at home.”

Then she wrote: “I work for an online luxury consignment brand taking pictures of clothing to be then uploaded to a website for people to browse and buy from. This is not an essential business.”

The RealReal isn’t the only retailer facing questions over whether its e-commerce operations are essential. On March 24, in an article about these “gray areas,” The Seattle Times reported that Nordstrom employees “didn’t understand why the upscale clothing retailer’s fulfillment centers were still fully staffed in light of guidance to limit gatherings of more than 10 people.” (The White House issued the 10-people-or-less guidance on March 16.)

There is little consistency among clothing companies when it comes to keeping operations going. Madewell and Abercrombie & Fitch specified that their distribution centers would keep running with extra precautionary measures.

But other retailers, including TJ Maxx and Patagonia, announced they would not keep their e-commerce operations going.

None of the RealReal warehouse employees who spoke to The New York Times have accused the company of violating New Jersey law. But while fewer people are now working simultaneously at the warehouses, the employees said it doesn’t seem like a bare-minimum operation.

On Tuesday, the RealReal management offered workers $100, on top of their regular salaries, for each additional shift they picked up. Employees who live in New York City, the country’s coronavirus epicenter, were eventually told not to come in to work, though one day earlier they were told they could report to work on a “volunteer basis.” The company said it is approving all time-off requests, and has continued to pay and provide benefits to all employees.

“I don’t care how much you pay me at this point,” an authenticator said. (Authenticators and photographers typically make $14 to $18 an hour, employees said.) “You’re not protecting me.”

In an email sent to employees on March 12, the RealReal outlined its safety plans for the e-commerce centers: The company would stagger breaks and lunches and review warehouse layouts to practice social distancing; provide masks and gloves when available; increase cleaning of common areas; and maintain an expanded janitorial staff.

If any worker tested positive for Covid-19, management would immediately close that location until it was safe to reopen. (Employees were also given all the usual directives: avoid events, wash hands, don’t hug, stay home if you’re sick.)

But the employees interviewed by The Times — all of them in their 20s, who work as authenticators or photographers in the Secaucus or Perth Amboy locations — said these measures weren’t fully implemented.

Workstations in one of the Secaucus buildings were far enough apart, but as of last week, an employee said, people were sharing tables in the cafeteria area and lining up for free pizza like normal — “all on top of each other,” the employee said, sharing a photo.

This week, another employee said, people were still having face-to-face conversations without the recommended six feet of distance between them.

Workers said they received hand sanitizer, but gloves weren’t being widely used while handling inventory, which was passed between employees in multiple departments throughout the day.

“It’s a lot of touching,” one employee said.Some people were bringing their own gloves and masks from home.

(An employee at the Perth Amboy warehouse noted that she did see protective gear being offered and social distancing being practiced at her location, particularly in the early days of the company’s response to the new coronavirus.)

In a statement, the RealReal maintained that workers have been educated on social distancing — which is being enforced on-site, the company said — and that all managers were given a full stock of gloves and cleaning supplies.

Warehouses are cleaned and sanitized “during every hour of every shift,” and in weekly overnight deep cleanings, according to the company. Workers are given Lysol wipes to clean their dedicated stations when their shifts end.

But RealReal employees said there was fear around even getting to their shifts. Some ride to the office in a shared shuttle bus, which picks them up at train stations near the warehouses. Last week, workers were offered a daily $25 credit for personal transportation to the office. For some, that credit covered only one-way transportation, which still meant risking exposure to the coronavirus on public transit at least once a day.

“I can’t emphasize how stressful it is,” one employee said. “Mentally, it’s draining.”

“I think about it all the time, every time I leave the house,” another said. “Anyone can be carrying it.”

The RealReal has defended its decision to keep the warehouses open as a means to keep people employed.

Earlier this month, it considered a reduction in staff but decided against it; affected employees would have been left without a full month of health care benefits, the company said in its statement, and “unemployment payments now, before the stimulus,” would not be as high.

Workers have been told that if the New Jersey warehouses close, and the California warehouse does not reopen, there will be significant layoffs.

“We are very aware that a layoff would hurt you financially and that unemployment payments may not bridge the gap to cover your basic expenses,” the leadership team wrote in an email to staff on March 22. “However, if the business stays open, even at a reduced level, we can maneuver through these challenging times.”

The four warehouse employees The Times spoke with all said they’re not too worried about themselves getting sick on the job — they’re young and healthy, they reasoned. (While older people are more likely to die of the disease, 40 percent of hospitalizations are of people under 54.) They’re more concerned about bringing the virus home to their loved ones, including roommates and family members with underlying medical conditions.