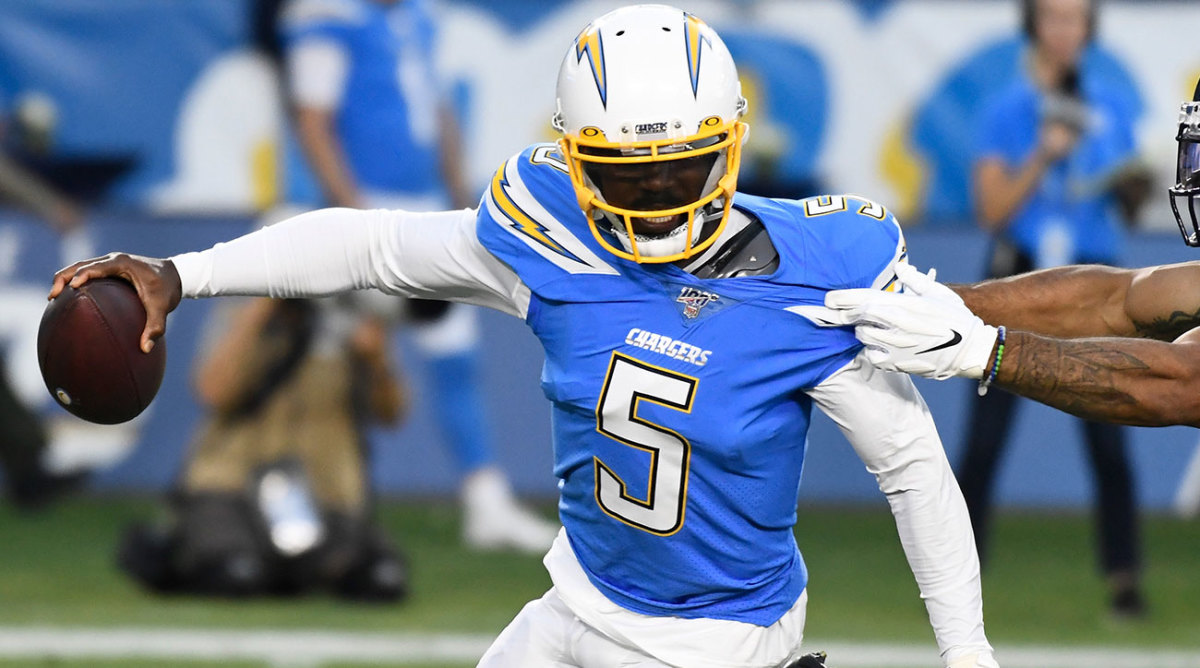 Many were encouraged by the promise and short-term growth that Drew Lock showed in five starts as a rookie last season in Denver. Now the mission is to put better resources around him. The offensive line, which struggled, has new starters in three spots: right guard (Elijah Wilkinson, moving inside from tackle), right tackle (Ja’Wuan James, who arrived last year but missed 13 games) and center (Graham Glasgow, a free agent signing). Most likely the Broncos will not consider offensive line closely in the early rounds of this draft, but it’d be hard to criticize GM John Elway for pouncing if a talented blocker falls.

Before that, though, Elway will have hopefully found some targets for Lock. If Courtland Sutton is not already a true No. 1 receiver, he’s on the precipice. However, he’s the only true starting quality wideout on the roster. Finding a flexible Z-receiver who can move around the formation would do wonders. The Broncos could also use a second tight end to challenge free agent pickup Nick Vannett. Last year’s first-round pick, Noah Fant, is looking a little better as a blocker than many expected, so it’s not all bad if that No. 2 tight end is predominantly receiver. But if choosing between multiple prospects, expect Elway to tab whichever one is most multidimensional.

Defensively, the addition of cornerback A.J. Bouye rectifies most of the damage done from losing Chris Harris to the Chargers, and the (hopeful) return to health for last year’s free agent pickup Bryce Callahan can greatly improve Denver’s slot coverage (which is a critical, complex duty in this matchup-zone-based scheme). But after those two, the cornerback room is full of question marks. The projected No. 2 starter, Isaac Yiadom, played better down the stretch than early in the season but still has much to prove. A highly-touted rookie could challenge him for playing time.

Keep in mind, however, that Broncos head coach and defensive play-caller Vic Fangio has rarely had premium corners in his career. And so, over the years, his scheme has been tweaked continuously to help that position. Thus, it wouldn’t be a huge surprise if Denver invested its early defensive picks in the front seven, even though it has no obvious weak spots to correct.

Top-100 Targets (Denver owns picks 15, 46, 77, 83 and 95): Of the top receivers, Alabama’s Jerry Jeudy would be a perfect complement to Sutton, and LSU’s Justin Jefferson isn’t far behind (though if Oklahoma’s CeeDee Lamb falls, or they opt for pure burner Henry Ruggs III of Alabama, you couldn’t blame them). They can find some Fangio-style corners on Day 2, like Auburn’s Javaris Davis if they want inside/outside flexibility, or Mississippi State’s Cameron Dantzler if they are looking for strictly a boundary option. A right guard prospect with outside-zone ability to match the rest of the front five would make sense with one of their first five picks: Louisiana’s Robert Hunt and LSU’s Saahdiq Charles are tackles on some boards but would likely fit as guards in Pat Shurmur’s offense. Clemson’s John Simpson and Oregon’s Shane Lemieux are primarily power guys, but move well enough to slide in at right guard in this offense.

For this team to pick up where it left off, head coach Andy Reid and GM Brett Veach must fill in some cracks. The biggest is in the secondary, where starting left corner Bashaud Breeland and unheralded utility DB Kendall Fuller are both gone. Breeland’s job can be filled by a traditional corner; Fuller’s is a different story. Late last season he became Tyrann Mathieu Lite for KC, operating at both safety spots and in the slot. His versatility made the actual Tyrann Mathieu even more valuable.

In front of the secondary, it would be nice to draft another edge rusher to go with Frank Clark (unless the Chiefs bring back Terrell Suggs, who is still very viable playing 20-25 snaps a game). But if the Chiefs have a linebacker they love, they should go there first. Kansas City’s incumbent linebacking unit—Anthony Hitchens, Damien Wilson and Ben Niemann—played much more efficiently as they grew more comfortable in coordinator Steve Spagnuolo’s scheme, but it’s still not a particularly fast group. Plus, Wilson and Niemann are in contract years.

On offense, it’s just a matter of touching up some details: a backup to tight end Travis Kelce is needed (Blake Bell filled this role admirably in 2019 but recently signed with Dallas); a replacement must be found for free agent Demarcus Robinson, who was the No. 3 or 4 receiver (depending on the package); and a multidimensional running back to pair with the seemingly unbenchable Damien Williams wouldn’t hurt. (Williams is also due for free agency in 2021.)

Something to remember: When you have superstars like Patrick Mahomes, Tyreek Hill and Kelce, the players around them are automatically boosted. So if the Chiefs ignore any of these “needs” on offense and simply promote some of the fringe players from last year’s preseason roster or practice squad, Chiefs fans need not cry out.

Top-100 Targets (Kansas City owns picks 32, 63 and 96): They’ll be able to find back-seven help at the end of the first round. If they want that versatile piece to replace Fuller, they should probably look to the safety group. Alabama’s Xavier McKinney would be an ideal fit if he makes it to the end of Round 1, as does LSU’s Grant Delpit (though his inconsistencies as a tackler might be too much to overlook). If they wait until Day 2, Utah’s Terrell Burgess can fill a lot of different roles. Both LSU’s Patrick Queen and Oklahoma’s Kenneth Murray would bring needed athleticism to the linebacking corps if they’re available late in the first; that position group is thin though, and K.C. might have to pounce if one of them makes it to 32. While he’s not exactly filling a need, LSU RB Clyde Edwards-Helaire would be electric in this offense should he make it to the end of Round 2.

After adding 4-5 new defensive starters in free agency (LBs Cory Littleton and Nick Kwiatkoski, defensive tackle Maliek Collins, cornerback Eli Apple and strong safety Jeff Heath), the Raiders, who became unexpected playoff contenders in 2019, are just a couple pieces away from having a full-fledged playoff-caliber roster. The main thing that’s still needed is an edge rusher. Last year’s fourth overall pick, Clelin Ferrell, improved over the course of his rookie season but is best equipped to rush the passer from inside. Ferrell’s fellow 2019 rookie, fourth-rounder Maxx Crosby, has looked like a draft steal, but he accounts for just one edge spot. Free agent pickup Carl Nassib can maybe come off the other edge, but his best work comes on first and second down. A true speed-rushing bender would give defensive play-caller Paul Guenther the pass rush that his predominant two-deep zone scheme demands.

On offense, the Raiders still haven’t filled the cataclysmic void left by the Antonio Brown nightmare. Ex-Eagle Nelson Agholor can push 2019 midseason pickup Zay Jones for the No. 2 job, but a rookie with even above average speed could almost immediately jump those two in the pecking order. It would behoove Las Vegas to invest big here since top incumbent wideout Tyrell Williams is more of a really good No. 2 than a true No. 1. The Raiders may have found a hidden slot gem in 2019 fifth-rounder Hunter Renfrow, so whichever rookie receiver comes in best be equipped to play on the perimeter. QB Derek Carr is most comfortable getting the ball out quickly. It’ll be interesting to see if the Raiders prioritize finding a receiver who fits this approach, or if they just take the best prospect available. For what it’s worth, their current best receiver, Williams, is more ideal for a deeper dropback passing game.

Top-100 Targets (Las Vegas owns picks 12, 19, 80, 81 and 91): In a draft that lacks depth on the edges, LSU’s K’Lavon Chaisson might be too much to pass up with the 12th pick. He’s raw and might be better standing up, but he’s a burner who can make an impact as a pass-rush specialist early in his career. However, it might be tough to pass on Oklahoma WR CeeDee Lamb if he’s there at 12; he can make plays downfield or in the quick-game that Carr prefers. If they wait until 19 to address receiver, that would leave them potentially looking at Alabama’s Henry Ruggs III, who brings the kind of speed they need but is more of a pure downfield threat who might not mesh with Carr, or perhaps unpolished YAC monster Brandon Aiyuk of Arizona State (think Deebo Samuel) becomes an option. If they wait until the third round to draft a speed rusher, Syracuse’s Alton Robinson and Florida’s Jonathan Greenard become possibilities.

If any coach would be willing to make Tyrod Taylor his starter, it’s Anthony Lynn, who values mobility at quarterback, including for how it can enhance a rushing attack (which is Lynn’s area of expertise). Most likely, though, the Chargers will draft their QB of the future—and he will have a good chance at immediately becoming the QB of the present. The rest of the roster is pretty well rounded out…for now. But the list of players who are slated for free agency in 2021 is staggering:

These are seven of L.A.’s 10 biggest stars (the other three stars: S Derwin James, CB Casey Hayward and either new CB Chris Harris or RB Austin Ekeler). Having a QB on a rookie deal will make re-signing these guys more manageable, but even then, it’s likely that at least a few will get out the door.

There’s no chance Joey Bosa will, and there’s little to no chance Keenan Allen will. After that, it could be a function of how this draft goes. Given the enormous gap between the cost of rookie contracts and the cost of re-signing marquee veterans, GM Tom Telesco might just draft the best player available, regardless of position, and let that dictate the team’s 2021 investment decisions.

Or…Telesco might REALLY gamble and go all-in on a Super Bowl run in 2020. That could seem crazy for a team coming off a 5-11 season and having just said goodbye to longtime franchise QB Philip Rivers. But the Chargers know that their 2019 woes were dictated largely by a rash of extremely costly turnovers (some due to uncharacteristic mistakes by Rivers) and by injuries here and there (most notably to Derwin James, their most dynamic back seven defender). Look at the team’s free agent signings so far: nose tackle Linval Joseph (turns 32 in October), cornerback Chris Harris (31 in June) and right tackle Bryan Bulaga (31). All three have over $11 million cap hits in 2021 and would cost around at least $4 million to cut.

If the Chargers are drafting for right now, their biggest needs, in order, are: quarterback, left tackle and linebacker.

Top-100 Targets (Chargers own picks 6, 37 and 71): Alabama’s Tua Tagovailoa and Oregon’s Justin Herbert both make sense at 6 (or, in Tua’s case, a trade up to 2 or 3), and if they’re in win-now mode, Tagovailoa, if healthy, makes more sense than Herbert. But it wouldn’t be a shock if they stayed put and selected Louisville OT Mekhi Becton or Georgia OT Andrew Thomas to plus in at left tackle immediately, keeping Bulaga on the right side. They can cross their fingers that either LSU’s Patrick Queen or Oklahoma’s Kenneth Murray falls to Round 2, but otherwise they’re looking at limited early-down linebackers like Ohio State’s Malik Harrison or Texas Tech’s Jordan Brooks, or raw coverage LBs in Oregon’s Troy Dye and Colorado’s Davion Taylor, in Round 3.