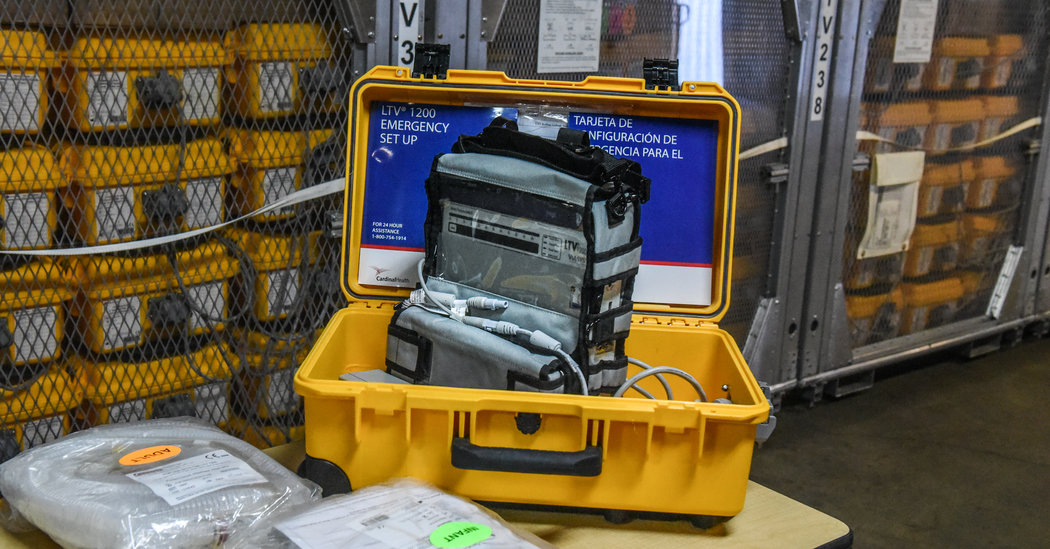 A New York hospital system has begun treating two patients instead of one on some ventilators, a desperate measure that could help alleviate a shortage of the critical breathing machines and help hospitals around the country respond to the surge of coronavirus patients expected in the coming weeks.

NewYork-Presbyterian Hospital, began “ventilator sharing” this week, said Dr. Laureen Hill, chief operating officer at the Presbyterian/Columbia University Irving Medical Center system. Doctors have developed protocols for the maneuver and now are rapidly scaling it up while also sharing their methods with the federal and state governments and other hospitals.

Ventilator sharing has been explored in a few scientific studies and has been used twice in crisis situations — the immediate aftermath of the 2017 Las Vegas shooting and, as of several days ago, by an emergency physician, Dr. Marco Garrone, for coronavirus patients in Italy. This is believed to be the first time that it has been put forth as a longer-term strategy in the United States.

“We’re doing something that hasn’t really ever been done before,” said Dr. Jeremy Beitler, a pulmonary disease specialist at NewYork-Presbyterian/Columbia. “Now is the time to do it.”

Gov. Andrew M. Cuomo of New York said on Thursday that the state had approved the new method, which is also being studied by federal officials. And this week, the Food and Drug Administration granted emergency use approval to a device called VESper, developed by the South Carolina-based Prisma Health, that adapts one ventilator for use with four patients.

On March 14, Dr. Charlene Babcock, an emergency physician at Ascension St. John Hospital in Detroit, posted a YouTube video showing how to modify a ventilator to keep not one but four people breathing. It has already has more than 724,000 views.

Generally, when patients are mechanically ventilated, a flexible tube is placed into their windpipe, and a finely calibrated pump sends oxygen-rich air into the lungs. In the video, Dr. Babcock uses a T-tube and three adapters to split two valves into four ports, and suggests positioning the patients headfirst around the machine. Dr. Babcock and her colleague Dr. Greg Nyman had published a study of the hack in 2006 — but tested it on four lung simulators, not patients.

“Here’s my disclaimer: This is off-label use for a ventilator,” she says in the video. “If it was me, and I had four patients, and they all need intubation, and I only had one ventilator, I would simply have a shared discussion meeting with all four families and say, ‘I can pick one to live, or we can try to have all four live.’”

NewYork-Presbyterian is using ventilator sharing for only two patients at a time who need settings on the ventilator that are very similar. Dr. Beitler emphasized that each patient is still receiving the same amount of oxygen and level of care as previously. Sharing will not immediately double ventilator access, he added, because many patients will need their own.

The hospital has not yet run out of ventilators, but Dr. Beitler said it was better to try the technique now than “when you have absolutely no choice.” Notably, he believes the technique will not increase staffing needs.

Officials are desperate for ventilators because they expect the need to far outstrip their supply in the coming weeks. Even after a shipment of 4,000 of the complex machines from the federal government and other emergency efforts, the state is expecting a shortage in the thousands. “Our single greatest challenge is ventilators,” Mr. Cuomo wrote on Twitter on Wednesday. “We need 30,000 ventilators. We have 11,000.”

With about 175,000 ventilators in hospitals and the federal stockpile, other states are also braced for shortages. Coronavirus patients often need to stay on ventilators for days or weeks.

The subject of splitting ventilators is “highly controversial” among respiratory specialists, said Dr. Josh Farkas, an assistant professor of pulmonary and critical care medicine at the University of Vermont.

“While this is a technique that potentially could work for maybe a few hours, there are some significant hurdles,” said Dr. MeiLan Han, a pulmonologist at the University of Michigan Health System and a spokeswoman for the American Lung Association.

Among the concerns are the inability to monitor the impact on each individual; the potential for cross-contamination of infectious pathogens; and the possibility that instead of one person receiving lifesaving treatment, multiple patients would get dangerously subpar therapy.

“When we ventilate a patient, there’s two things we’re trying to control: pressure and volume,” Dr. Han said. “And for this to work, every single patient would have to be OK with the same setting.” While she wasn’t speaking specifically about the NewYork-Presbyterian method, she noted that patients tend to have unique, dynamic needs.

There have been three follow-up studies to Dr. Babcock’s. A 2008 study of four sheep kept the animals breathing for 12 hours. In a tiny 2009 study, two healthy, awake volunteers shared a split ventilator for 10 minutes. And a 2012 study on test lungs concluded that the findings “cannot support the use of this concept for mass-casualty respiratory failure.”

“There is no way to monitor the individual patients without some invasive monitoring or additional monitors for each patient,” said Dr. Richard Branson, a co-author of the 2012 study, a pulmonologist at the University of Cincinnati College of Medicine and editor in chief of the journal Respiratory Care.

The lack of evidence is what alarms Dr. Branson. “I think the time to try an untested treatment not previously used in humans is not in the midst of a pandemic,” he said.

But the pandemic is straining the normal rules.

One of the authors of the 2008 sheep study is Dr. Lorenzo Paladino, an associate professor at SUNY Downstate Health Sciences University in Brooklyn. He and several colleagues kept four adult sheep alive on a single ventilator for 12 hours.

On Tuesday, while tending to Covid-19 patients at Kings County Hospital, he received a call inviting him to Washington to discuss his research with federal officials, he said.

On Wednesday, he met with federal officials at FEMA’s headquarters to explore the possibility of establishing protocols for how to put multiple patients on one ventilator, he said in an interview Wednesday evening.

“We spent the day writing out physician protocols on how to use this,” Dr. Paladino said. The idea, he said, was that the federal government could issue guidance to doctors and hospitals nationwide.

He acknowledged that there were risks.

“Nobody believes this is the best way to ventilate somebody — this is for the doomsday scenario when we run out of ventilators,” Dr. Paladino said. “It’s suboptimal, but the other option is death.”