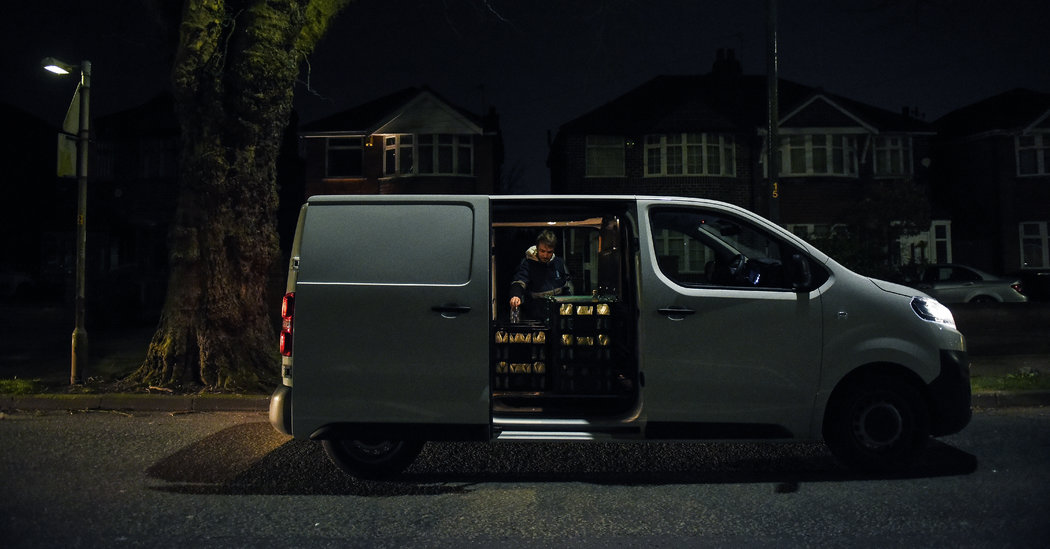 LEEDS, England — The problem, for Peter Critchley, is that the phone just keeps ringing. At least 30 calls a day, every day. Then there is the online backlog: He has 100 more requests on his website to wade through every evening. He has already added some 600 new customers, and more just keep coming.

Suddenly, it seems, everyone wants a milkman.

The surge has been going on for a week or so, Mr. Critchley said. As the British government’s measures to slow the coronavirus’s spread have grown incrementally tighter, as towns and cities have fallen quiet, as shops have closed and communities — mostly — started to follow officials’ advice to stay at home, more and more people have turned to Mr. Critchley, and others like him.

It is one less reason to venture outside, one way of avoiding snaking queues and empty shelves at supermarkets, at least one essential that can be guaranteed.

“At the moment, it’s just about managing,” Mr. Critchley said. He has been running the business — I.W. Critchley & Son, in the northern city of Leeds — since he took over from his father, the founder, some 40 years ago.

It is, he said, a “small, family firm.” At 67, and theoretically nearing retirement, he now describes himself as the “office boy.” He leaves deliveries to his sons, Robert, James and Richard, working from midnight until around 9 a.m. every day.

For a long time, that was enough, but that has changed starkly in the course of the past week. A month or so ago, Mr. Critchley had a little more than 4,300 registered customers. Now, that number has ticked north of 5,000.

“It has been huge,” he said. “We have had people calling up to ask for jobs. Normally we’d just say no. Now we have to think, ‘Do we need someone else?’”

The story is the same across the north of England. Almost all milk delivery services contacted by The Times have placed notices on their websites or added voice-mail messages warning prospective customers about the high level of demand; many have updated their Facebook pages to thank people for their patience.

Robert Orton, a milkman in Harrogate, North Yorkshire, has seen such a spike in interest that, reluctantly, he is having to turn away prospective customers. “I can only take new people if they live on streets that I already go down,” he said. “Otherwise, I just can’t do it. It’s been mad.”

In Colne, a town that straddles the border between Lancashire and Yorkshire, Simon Mellin is searching for 10 new delivery vans and 20 new drivers. The company he and three friends founded in 2018 — the Modern Milkman, an entirely digital platform — has seen its revenue double in four days.

Only part of that is down to new customers: Before the pandemic hit, around 9,000 people were using Mr. Mellin’s platform. “At the end of today, it will be around 14,000 or 15,000,” he said on Tuesday. But established customers are ordering more, too.

“People need more milk, and they want things like vegetable boxes, too,” Mr. Mellin said. “They are buying all their groceries.”

For an industry that seemed, for a long time, to be edging toward irrelevance, it is a seismic shift. Until recently, milkmen were seen as something between a luxury and a vestige of a forgotten past: something people had fond memories of as children, but not really necessary in the modern world.

Throughout the 1990s and early 2000s, customers dwindled in the face of aggressive price reductions on milk by supermarkets, driving many milkmen out of business altogether. “I had countless conversations with people who told me I wouldn’t be delivering milk much longer,” Mr. Orton said. “Everyone could get their milk from the supermarket.”

He once shared Harrogate, a well-heeled spa town a few miles north of Leeds, with more than 30 other milk delivery services; now, he said, there are just six. Mr. Orton survived by picking up business from those who retired or could no longer survive. It was the same for Critchley, in Lancashire. “It went down and down,” he said. “We’re one of only a few left.”

That started to change in 2017, with what Mr. Critchley calls the “Blue Planet effect.” David Attenborough’s documentary “Blue Planet II” was broadcast in Britain late that year, highlighting the danger posed to the oceans by single-use plastic bottles. There was, Mr. Critchley said, a “pleasant little boost” in demand as young families, in particular, started to see the benefit in having locally sourced milk delivered in reusable glass bottles.

That was the inspiration for Mr. Mellin to set up The Modern Milkman. He and his friends started out taking over a single milk route; they have since expanded into both Lancashire and Yorkshire, and even into the cities of Manchester and Leeds. (The company’s profile was raised a little last year when Prime Minister Boris Johnson hid in one of its refrigerators to avoid difficult questions from a reporter.)

“It is the easiest thing to market,” Mr. Mellin said. “People want to buy local, and they want to make a difference to the environment.” The company has long had more customers in cities than in the rural areas it covers; having a milkman has, to some extent, been the preserve of those who can afford to eat ethically.

The motivations of those signing up now, though, are different; if anything, they are more urgent. “It is less about the environment at the moment, and more about survival,” Mr. Mellin said.

Mr. Orton, too, has noticed that his new customers — or those asking to be added to his route — are older, or trying to help out neighbors and relatives who fall into high-risk groups for coronavirus. “People are panicking,” he said.

The spread of the virus, and the grip of lockdown, has turned the clock back in many countries, placing much of the modern world on involuntary hiatus. The fate of the milkman has tracked that perfectly, cycling from expensive throwback to hipster fad all the way to what it used to be: close to a basic necessity.

Once the pandemic is over, of course, some of that business may fade away. “We hope not,” Mr. Critchley said. “We don’t want to be the puppy that’s just for Christmas.”

But perhaps it will not. Mr. Mellin and his colleagues are working out how they can help the government deliver food parcels and prescription medicines to older people and others who are vulnerable for the duration of the crisis. They already have the infrastructure in place and the expertise in the logistics of such a complex operation.

“We are hoping that people will look after us,” he said. “Because we have looked after them.”