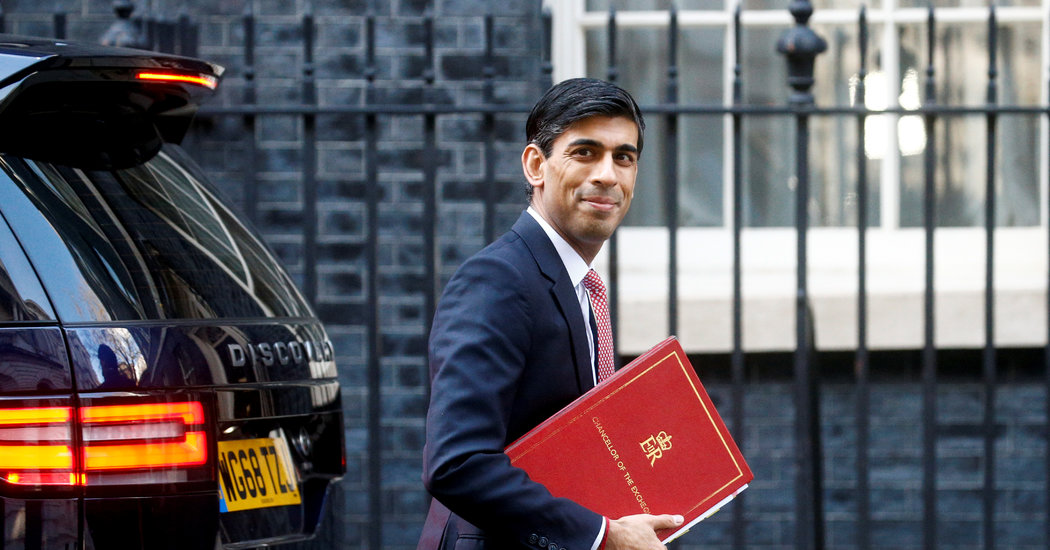 LONDON — When Rishi Sunak was elected to Parliament in 2015, he recalled a piece of advice from his father-in-law, Narayana Murthy, a technology billionaire who is one of India’s richest men. “In God we trust,” Mr. Murthy told him, “but everyone else needs to bring data to the table.”

Now 39 years old and Britain’s top finance official, Mr. Sunak is trying to apply that lesson to the greatest economic rescue in the post-World War II history of the country. As chancellor of the Exchequer, Mr. Sunak has orchestrated a series of increasingly desperate efforts to protect Britain’s 66 million people from the sudden dislocation brought on by the coronavirus pandemic.

On Thursday, Mr. Sunak rolled out the latest — a package to pay 80 percent of the earnings of self-employed people who lost income because of the lockdown of the country. That came on top of measures last week to compensate people laid off from companies and more than $300 billion in aid for distressed businesses.

In the process, Mr. Sunak, who was thrust into his job six weeks ago, has become one of the stars of this crisis. On one level, that is not surprising: his job, after all, is to dole out money. But beyond that, commentators say, Mr. Sunak’s grave, self-assured delivery and empathetic tone are proving a better match for the moment than the shambling levity of Prime Minister Boris Johnson.

“Now, more than any time in our recent history, we will be judged by our capacity for compassion,” Mr. Sunak declared last week. “Our ability to come through this won’t just be down to what government or business can do, but by the individual acts of kindness we show one another.”

On Thursday, he spoke to plumbers, hairdressers, musicians and other self-employed workers. “To you, I say this: You have not been forgotten,” Mr. Sunak said at a news conference. “We will not leave you behind.”

In a poll by the market research firm YouGov this week, Mr. Sunak has an approval rating of 60 percent, with only 11 percent disapproving. Mr. Johnson’s ratings have risen as well — to 55 percent in the same poll — but he remains a more divisive figure, with 35 percent of people disapproving of him.

In Conservative Party circles, Mr. Sunak is already being floated as a future party leader and perhaps even the first ethnic minority prime minister in British history. His Indian grandparents, originally from Punjab, came to England from British colonial East Africa in the 1960s.

“He is incredibly smart and as a very young chancellor, he has responded with great ingenuity to huge strains imposed by the coronavirus crisis,” said William Shawcross, a writer and commentator who works for the government as a special envoy representing victims of terrorism.

There is no shortage of obstacles in Mr. Sunak’s path, not least how he will unravel the fiscal stimulus he is pumping into the economy. The lesson of the financial crisis of 2008 is that bailouts can sow bitterness in people who believe they did not get their fair share. For those who did, they can create unrealistic expectations.

“This crisis will force the government into something quite close to universal basic income,” said Jonathan Powell, a former chief of staff to Tony Blair. “Once you’ve done that, taking it away from people is very hard.”

While the public is rallying behind the government now, people are likely to ask hard questions afterward, especially about the austerity policies enacted by Conservative governments, which left the National Health Service financially starved and ill-equipped for the deluge of virus patients.

After winning high praise for his initial efforts, Mr. Sunak was criticized for not moving faster to protect self-employed people, many of whom saw their income vanish as soon as Mr. Johnson ordered people to stay in their homes. It was, Mr. Sunak said, “incredibly complicated” to design a comprehensive and fair package, given the varied circumstances of these workers.

The delay contributed to Britain’s fitful adherence to the lockdown Mr. Johnson put in place on Monday. Thousands of freelancers and other self-employed people continued to go to work, thronging London’s subways and raising alarms about spreading the virus. Critics noted that the compensation in this package will not be available until June — too late to help some strapped workers.

For a Conservative to preside over such a state intervention is a deep paradox. Yet people who have worked with Mr. Sunak say he is well-suited to the task. Pragmatic and politically astute but non-ideological, he is able, they say, to design policies to keep the economy afloat and maneuver them through the government.

“As much as it will pain many of his rivals to admit it, he does appear to be the complete package,” said Tim Bale, a professor of politics at Queen Mary University in London. “It is almost as if he were born to play this role at this particular time.”

Still, Mr. Sunak’s success also reflects the fact that he accepted, as a condition of getting his job, far less independence than chancellors have historically enjoyed. His predecessor, Sajid Javid, was forced out in February after he defied Mr. Johnson’s demand to get rid of his own advisers and install people loyal to the prime minister.

Such adaptability, former colleagues said, is another hallmark of Mr. Sunak’s success. The eldest son of a doctor and a mother who ran a pharmacy, Mr. Sunak has combined his Indian heritage with a classic Tory pedigree. Educated at the elite Winchester School and Oxford, where he graduated with first-class honors, he earned an M.B.A. at Stanford. He met his future wife, Akshata, in California.

After that came stints as an analyst with Goldman Sachs and two hedge funds, one of which, The Children’s Investment Fund, came under fire for pressing ABN Amro, a Dutch bank in which it held shares, to sell itself to the Royal Bank of Scotland. The acquisition contributed to the later collapse of RBS.

Mr. Sunak launched his political career with a run for a safe Conservative seat in Yorkshire. He charmed people in the constituency’s rural dales, recruiting his father-in-law to hand out campaign leaflets. When he won, local papers nicknamed him the “Maharajah of the Yorkshire Dales.”

In 2016, Mr. Sunak decided to back Britain’s departure from the European Union — not out of any passionate euro skepticism, people who know him said, but because he calculated, correctly, that it would position him to advance in a Conservative Party that was swinging in that direction.

As Britain moves past these frantic days and confronts the long-term consequences of its moves, analysts said Mr. Sunak would probably lose some of his stardust. The question, they said, is whether he will be able to chart a new course, balancing the need to tax and spend in a post-pandemic world accustomed to a more interventionist state.

“When the final reckoning is made, there will be praise for the government response but there will also be criticism of the age of austerity that left us in this position,” Mr. Bale said. “He might be able to escape personally because he wasn’t the face of that policy, but I don’t think the Conservative Party will be able to escape.”