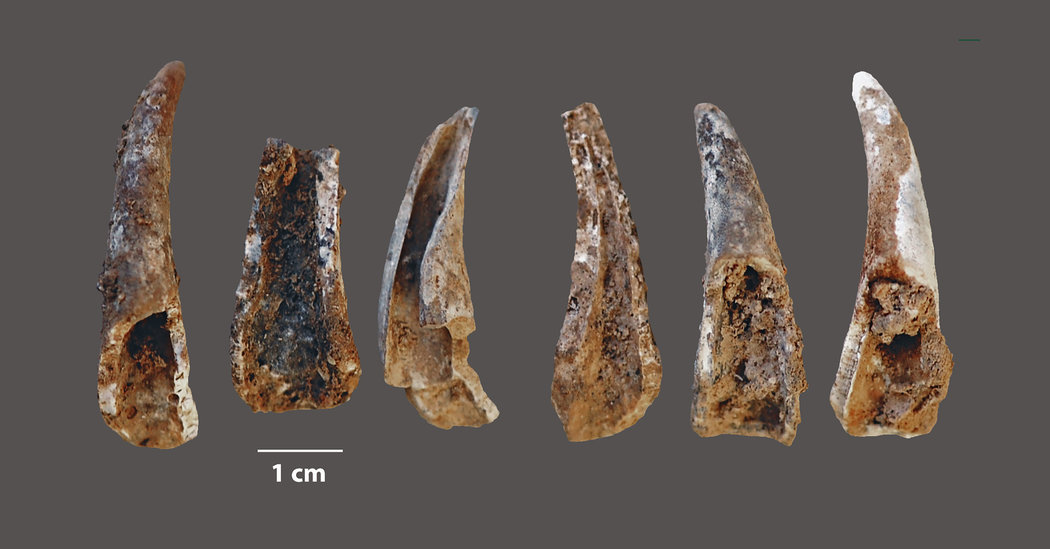 Inside, she worked alongside João Zilhão, an archaeologist from the University of Barcelona and lead author of the study, scraping away and collecting sediments. The two were sometimes joined by a third researcher, but never a fourth because the space was too tight. They had widened an existing hole in the cave wall that led outside, which let them receive supplies and deliver bags full of sediments to other team members for analysis. The sediment layers formed between 86,000 and 106,000 years ago.

“I was going through the sediment with my trowel and all of a sudden I spotted something and went ‘Wow! Looks like a fish vertebra,’” Dr. Zilhão said. He kept it, shimmied through the passageway and returned to the team so he could show the coin-size object to Sónia Gabriel, a zooarchaeologist at the Portuguese Ministry of Culture.

They later found shark teeth belonging to a different species, which suggested the Neanderthals feasted on a buffet of aquatic animals. The sediment contained bones belonging to eels, morays, conger, mullet and sea bream. They also found burned and cracked claws belonging to brown crabs and spider crabs, and even sea birds. They said this marine life could have made up about half of these Neanderthals’ diet, although they don’t know what was caught directly from the sea or scavenged from creatures that washed ashore or got trapped in tide pools.

In addition to the “surf,” they found plenty of “turf,” such as remains from horses, deer, ibex, aurochs, porcupine and tortoise. Plants were also part of the Neanderthal’s diet as evidenced by pine nuts.

The find from the Portuguese cave taps into ongoing scientific debates about the cognitive sophistication of Neanderthals, and how different the extinct species really was from our earliest modern human ancestors.