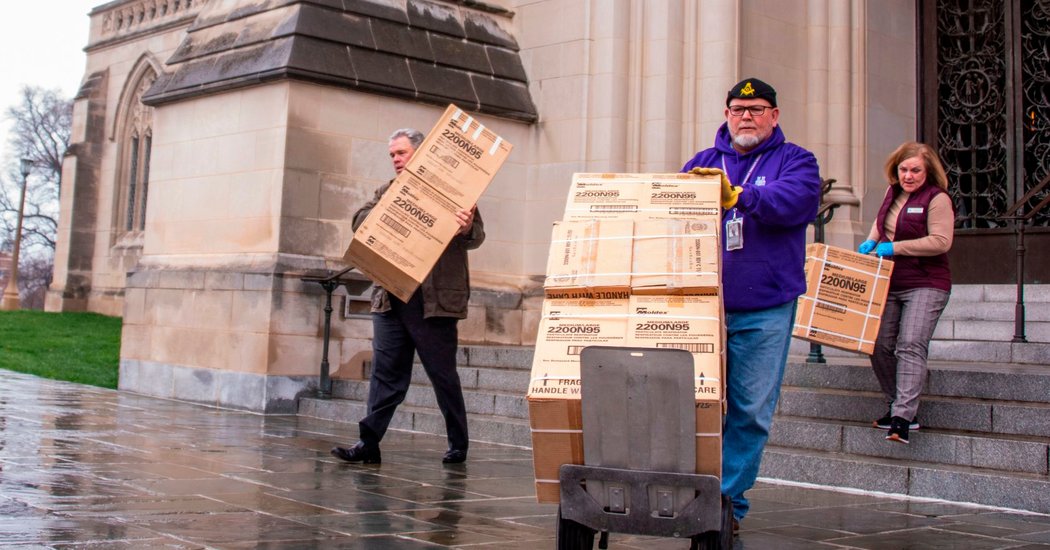 Joe Alonso, the head stonemason at the Washington National Cathedral, had tended to the building for 35 years. He knew its nooks and crannies.

So when news spread of a shortage of N95 masks needed to fight the coronavirus outbreak, Mr. Alonso remembered something nobody else did: More than 7,000 masks — purchased in 2005 or 2006 amid worries about an avian flu outbreak — were stashed away in an unfinished burial vault in the cathedral’s crypt.

The cathedral donated 5,000 masks on Wednesday to two Washington hospitals to help doctors, nurses and others fight the coronavirus outbreak, part of a worldwide search that is turning up millions of desperately needed masks, sometimes in unusual places.

On Thursday, a health care union called the S.E.I.U.-U.H.W. said it had found a whopping 39 million masks from a private company based in Pennsylvania that distributes medical supplies and pharmaceuticals. The masks were being sold for $5 each to groups like Kaiser Permanente and the Greater New York Hospital Association, the union said, adding that it had no financial interest at stake.

For some multinational companies, the masks were part of a preparedness strategy for a variety of disasters.

Goldman Sachs is donating 100,000 N95 masks, “procured in the wake of previous epidemics,” to hospitals in New York and New Jersey, Leslie Shribman, a spokeswoman for Goldman Sachs, said on Thursday. Abroad, Goldman Sachs is also donating 50,000 N95 masks to Britain’s National Health Service. Ms. Shribman declined to say where the masks were stored and how many masks in total the company had in its stockpile.

Nasdaq announced in a news release Wednesday that it had donated 12,000 face masks this month to the Greater New York Hospital Association and that the company would continue to collect additional masks from its clients. William Briganti, a spokesman for Nasdaq, said the company had face masks on hand as part of its “global crisis preparedness and business continuity plans” and could distribute them to employees in case of earthquakes, fires or a pandemic.

Mark Zuckerberg, Facebook’s chief executive, said in a statement Sunday that Facebook had donated its “emergency reserve” of 720,000 masks, which were purchased during recent wildfires in California. The company is “working on sourcing millions of more to donate,” he said.

Apple procured 10 million masks to donate to “the medical community in the United States,” its chief executive, Tim Cook, said in a video posted to Twitter on Wednesday, adding that “millions more” would be provided in Europe. A spokesman for the company declined to provide further details about the masks.

Lawrence O. Gostin, a professor of global health law at Georgetown University, said that it was good that these companies and institutions had a philanthropic instinct to donate masks, but that quality checks and quality assurance were needed.

“What these companies should be doing is offering funding for the makings of new masks that have specified quality,” Mr. Gostin said. “One has to ponder how it is that private companies that just have marginal needs for masks at best have huge stockpiles that they can donate, and that the government doesn’t have enough in its strategic reserve.”

At the cathedral, the 2,000 masks not donated were being kept as a “reserve supply for pastoral needs as they rise,” said Kevin Eckstrom, a spokesman for the cathedral, but the cathedral will re-evaluate the needs in the coming days.

He said the “first priority was to get the majority of them out to the folks who need them most immediately.”

The cache of masks was stored in 30 cases in an unfinished section of a burial vault that was built in the 1920s, Mr. Alonso said. In another section, the crypt contains the remains of people interred in the cathedral and several chapels.

The boxes with the masks were pushed back into concrete niches, which had openings that were 3 feet by 3 feet, originally meant to hold coffins, Mr. Alonso said. The niches have been used mostly for storage, he said.

“It’s really in the bowels of the cathedral, you could almost say,” he said.

The masks had expired, Mr. Eckstrom said, but were determined to be safe to use after consulting with the mask manufacturer and following guidance from the Centers for Disease Control and Prevention.

“It’s a burial vault,” Mr. Alonso said. “It’s dry as a bone, as they say, down there. And kind of climate controlled. Very steady, low-humidity environment down in the crypt there.”

He said that discovering and retrieving the masks was not like the experience some people had imagined: Cathedral workers did not crawl, like Indiana Jones, through any skulls or bones in an ancient crypt.

Then again, Mr. Alonso said, he and others did have to crawl about 12 feet deep into burial slots to get the masks — “deeper than a normal-length casket” — wearing masks of their own against the dust.

He added: “We had a little human chain going. Over the last couple days, we got them out, sorted them out.”