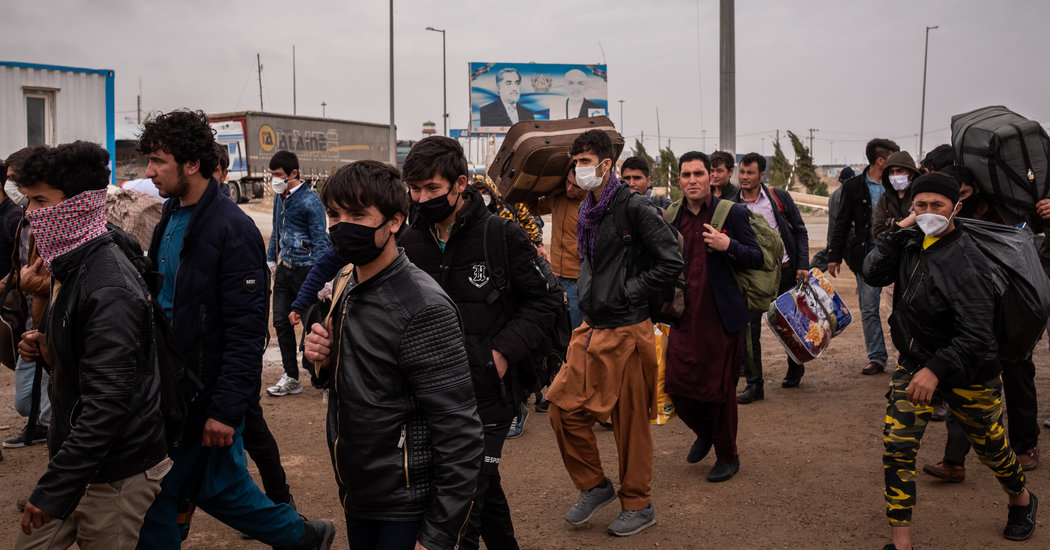 HERAT, Afghanistan — Afghanistan has already imported its epidemic. And each day it adds to it, as thousands more displaced Afghans continue to flow across the border from Iran, which has reported among the world’s highest numbers of Covid-19 cases and deaths.

The returnees, some surely infected with the coronavirus when in Iran, cluster shoulder to shoulder in massive crowds on both sides of the crossing, where toilet facilities are primitive and soap and potable water are scarce.

Later, they climb aboard overloaded taxis, buses and minivans for the two-hour trip to Herat city, the sprawling and crowded hub of western Afghanistan, where they sleep in packed hostels and cramped rooms behind restaurants.

From Herat, tens of thousands of the new arrivals have boarded more overloaded buses and vans en route to Kabul, the capital. From there, they have returned to crowded homes in Kabul or traveled onward to outlying provinces — potential vectors for spreading the virus nationwide.

More than 115,000 Afghans returned from Iran just between March 8 and 21, according to the International Organization for Migration. The agency said that even if the border crossing were to be closed, Afghans who wanted to get home could easily find a way, given how porous the border is.

Most returnees received rudimentary health screenings at the border crossing, where a small team of overwhelmed health workers struggled to cope with the influx.

On some days, only about 10 percent of arrivals had their temperatures taken, said Abdul Qayoum Rahimi, the governor of Herat Province. Only a handful were tested for the virus, he said. The province does not have enough health workers, gloves, masks or thermometers to handle the daily crush.

“This is a massive, massive return — simply overwhelming,” said Nick Bishop, who is leading the International Organization for Migration’s response to Covid-19 in Afghanistan.

The city of Herat, with nearly 300,000 people, is the epicenter of the virus in Afghanistan, but life continued as normal this week. People congregated in teeming markets and in mosques and parks, greeting one another with traditional hugs and kisses on the cheek. Some returnees have not been in Afghanistan for 10 or 15 years, so they wandered through the city in large groups, sightseeing in parks and markets.

“We fear that Herat will turn into another Wuhan,” Afghanistan’s minister of public health, Ferozuddin Feroz, said Tuesday, referring to the Chinese metropolis where the virus was first detected.

Mr. Rahimi, the Herat provincial governor, imposed a lockdown on Herat city beginning on Wednesday. He asked residents to cooperate with security forces and said exceptions would be made for people seeking food or medical treatment

But during the Nowruz Persian new year, Friday through Sunday, thousands of Herat residents defied an order by President Ashraf Ghani banning all holiday gatherings. They celebrated in large crowds and held family picnics in public — an indication that the governor’s recent stay-at-home order would face public resistance.

“The nature of this society is a very close physical one,” said Mr. Bishop, the migration official. “People touch one another a lot; they live in multigenerational families.”

He added, “Many people may pass away before people change their behavior to reflect the new reality.”

At the Herat hospital, where people thought to have Covid-19 were kept in isolation wards, Dr. Asif Rahmani said Afghans who had survived 40 years of war, and almost daily car bombs and roadside explosions, assumed they would survive the virus as well.

“People don’t take it seriously,” Dr. Rahmani said. “Because we are Muslims and we believe that God is great, he will decide. Good or bad, everything comes from God.”

Toby Lanzer, the United Nations humanitarian coordinator for Afghanistan, said during a visit to Herat that his organization was assisting Afghan health officials as they struggled to prevent the virus from spreading to a majority of the population.

“Covid-19 is the new front line in a country where health services can only be described as fragile,” Mr. Lanzer said.

Herat has reported 58 of the 80 confirmed virus cases in Afghanistan, the health ministry said. Only two deaths from Covid-19 have been reported nationwide, with three patients reported to have recovered from the virus. But health professionals say the number of cases is probably far higher because of minimal testing.

The Afghan health ministry projects that half of Afghanistan’s estimated 32 to 34 million people will contract the virus, and that more than 110,000 will probably die unless strict social distancing measures are imposed, Mr. Feroz said.

According to Herat health officials, one of the very first Covid-19 patients in the city was Wahidullah, 32, a father of four who returned from Iran in late February. He spent four days in the city, living with his family and moving through crowds in the streets, before he became the city’s first person to test positive for the virus, he said.

After three weeks in a Herat hospital, Mr. Wahidullah, who goes by one name, was declared recovered and was released, he said. He celebrated last weekend by attending a Nowruz picnic with family and friends.

“I panicked, I was so scared” after testing positive, Mr. Wahidullah said. “But the doctors told me it’s like the flu and doesn’t kill everyone. We are Muslims, and God looks after us.”

In Herat, health officials hired untrained residents of an internal displacement camp next to the city’s designated coronavirus treatment hospital for three days to clean rooms and help patients who had flulike systems as well as patients who tested positive.

Mohammad Osman, 56, a camp resident, said he was paid 300 afghanis (about $4) a day for three days to clean, make patients’ beds and help them move around the 150-bed hospital. He said he had not been provided with gloves or a mask.

“I had no idea what kind of disease these patients had,” Mr. Osman said.

Another camp resident, Ghulam Yahya, 56, said he had also worked at the hospital for three days. He said he worried that he might have contracted the virus and transmitted it to the nine family members who live with him.

“All they gave me was gloves; I had no mask and no gown,” Mr. Yahya said.

The police have since told residents of the camp to stay away from the hospital.

Moeedullhaq Fakhri, a doctor at the hospital, said staff members did not receive masks until March 15. He said he ignored a directive from provincial health officials instructing him not to accept people who might be infected from the border unless they paid hospital fees in advance.

“These are poor people who don’t have anything, and they need to be hospitalized,” Dr. Fakhri said.

When he complained to health officials about shortages of trained staff and medical equipment, he said he was told: “If you want to keep your job, keep working. If not, please resign.”

At the border crossing, Roya Mohammadi, 19, said she worked 12 hours a day helping screen the thousands of Afghans returning from Iran. She said that she feared some had Covid-19, but that she needed the income to support her extended family in Herat.

“I’m afraid of getting sick, of course,” Ms. Mohammadi said. “But I prefer to die with a full stomach rather than die of hunger.”

Reporting was contributed by Asad Timory and Jim Huylebroek from Herat, and Najim Rahim and Fahim Abed from Kabul, Afghanistan.