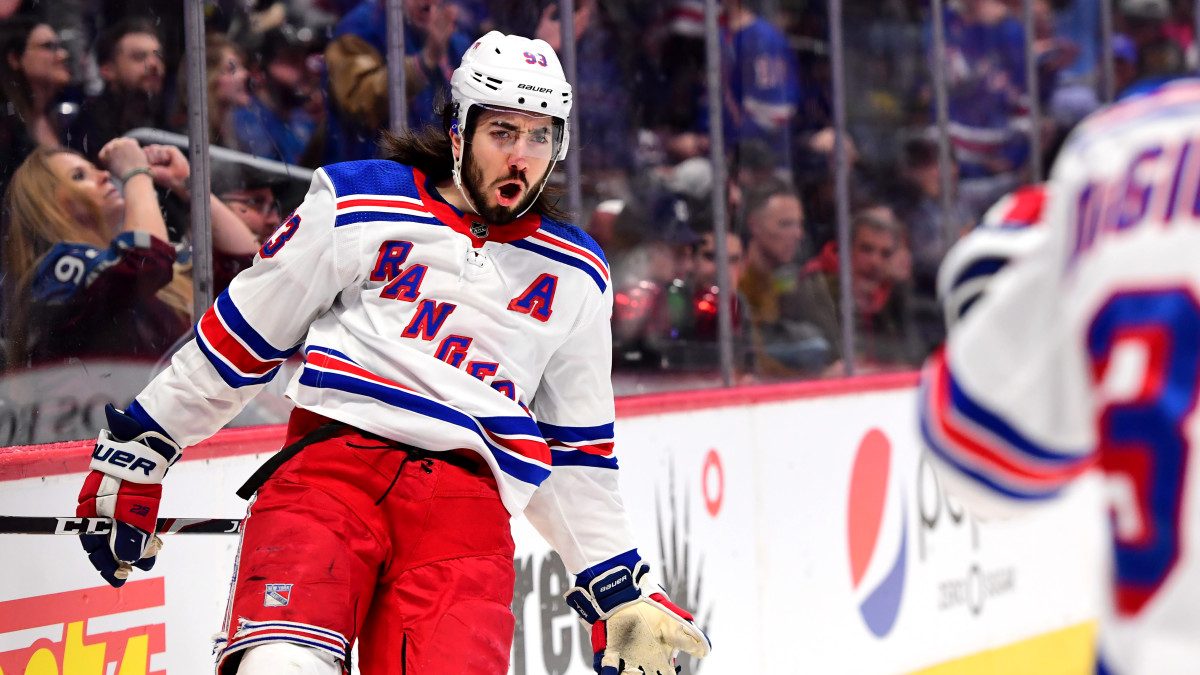 The COVID-19 pandemic and resulting NHL shutdown were bummers for so many reasons, the most important of which were obviously the horrifying real-world implications and some of which were simply disappointing within a sports context.

Focusing on the latter for now, one demographic within the hockey-player world that likely felt particularly gut-punched: those who were smack in the middle of mounting major hot streaks. For some, the momentum might have vaulted them into major awards races. For others, the spikes in production might have been correcting slow starts. And in some cases, the surges represented breakouts for youngsters.

Which players lost the most momentum as a result of the shutdown?

One of the most exciting NHL stories in the months leading up to the shutdown was Zibanejad going utterly nuclear. And it wasn’t just because he had the five-goal game March 5. In his last 40 games, he scored 34 goals, putting him at a 70-goal pace. In his supernova stretch across his final 12 games, he ripped off 16 goals and 23 points. He also entered the shutdown mid-binge, with a six-game goal streak in which scored 11 goals. Wow. That brought him to 41 goals, placing him seven back of co-league leaders David Pastrnak and Alex Ovechkin. Zibanejad had missed 13 games with an upper-body injury, so he was well ahead of the pack in goals per game. Had he played the Rangers’ full slate at his NHL-best mark of 0.72, he’d have a league-leading 50 goals. As hot as he was by early March, it’s fair to wonder if he could’ve caught up to the pack and even challenged for the Rocket Richard Trophy.

Fiala epitomizes the post-hype breakout. Leading up to the 2014 draft, when he was a slam-dunk first-rounder, one scout in our Draft Preview magazine referred to Fiala as “an artist” with “high-end skill, top-end creativity and anticipation.” We projected him to be a dynamic point producer. If you had lapsed into a coma then and awakened now, you wouldn’t be surprised by what Fiala did this season. But he sure took a circuitous route, teasing his ability as a Predator, enduring a badly broken leg and flopping last season after coming to Minnesota in a deadline-day trade.

This season, the production finally began matching the pedigree for Fiala, who had one point in his first eight games but 53 in his next 56. In an 18-game stretch leading into the shutdown, he ripped off 14 goals and 26 points, and he was only logging 17:36 per game. During that 18-game span, he trailed only Zibanejad in goals and only Zibanejad and Leon Draisaitl in points. Fiala quietly arrived as a front-line scorer this season. Among 334 forwards who played at least 500 minutes at 5-on-5, Fiala ranked 17 in points per 60, right behind Sidney Crosby and Patrick Kane. It’ll be interesting to see if Fiala maintains that level of play post-shutdown or, more sadly, next season.

The Predators signed the diminutive but dynamic goaltender Saros to a three-year extension at a $1.5-million AAV in July 2018. The hope was they could groom him over time to take over the Nashville net as Pekka Rinne inched toward his 40s. Rinne had won the Vezina but also imploded in the playoffs in 2017-18. The following season, however, Rinne outplayed Saros. This season, neither netminder seemed to want the net. At the all-star break, Rinne’s and Saros’ save percentages sat at .899 and .895, respectively. After the break, however, while Rinne continued to scuffle, Saros caught fire, going 11-4-0 with a .936 SP. Saros appeared in 17 games to Rinne’s seven.

Saros was finally taking the starting job just in time for Rinne to enter the final season of his contract – and perhaps career – in 2020-21. Still, Saros had struggled much of the year, and the hot-streak sample size wasn’t enormous. Surely GM David Poile would’ve liked to see how Saros fared the rest of the season and into the playoffs. He’d been as responsible as any Predator for getting the team back into the race.

Jonathan Quick, 34, was actually trending toward a strong finish to 2019-20, but the more important news in L.A. was the play of Petersen, 25. The Kings recalled their future No. 1 netminder in early February. After losing three of his first four decisions, he won four straight between Feb. 26 and the shutdown, posting a .947 SP. It was heartening to see Petersen excel after L.A. sent his competition, Jack Campbell, to the Toronto Maple Leafs in an early-February trade that prompted Petersen’s call-up. Quick is one of the most important players in Kings history, but his athletic, reflex-dependent game has worn down his body in recent years. He carries a $5.8-million cap hit for three more seasons but has no clauses restricting his movement. It’s fair to wonder if GM Rob Blake would leave Quick unprotected in the Seattle expansion draft, especially with Petersen emerging as a viable starting option. It’s just a shame they didn’t get a longer look at Petersen down the stretch.

Bemstrom was a sleeper entering the season after he became the youngest player ever to lead the Swedish League in goals last year. The Jackets certainly needed someone to step up given all their big-name forwards departing as UFAs. Bemstrom naturally had an adjustment period after making the team and debuting in October. He took 16 games to score his first career goal. He finally started to tease that sniper ability just in time to have his momentum halted, though. He scored five goals in his final eight games and was cruising on Columbus’ top line when the league stopped play. The return of injured Oliver Bjorkstrand next season will produce more competition at the top of the depth chart, but Bemstrom showed enough flashes to earn a long-term look on a scoring line.

**More from The Hockey News
The Best Late Pick in the 10 NHL Drafts From 2006 to 2015
Which Interim Coaches Will Stick Around Beyond This Season?
Why You Shouldn’t Sleep on the Predators Signing of Connor Ingram