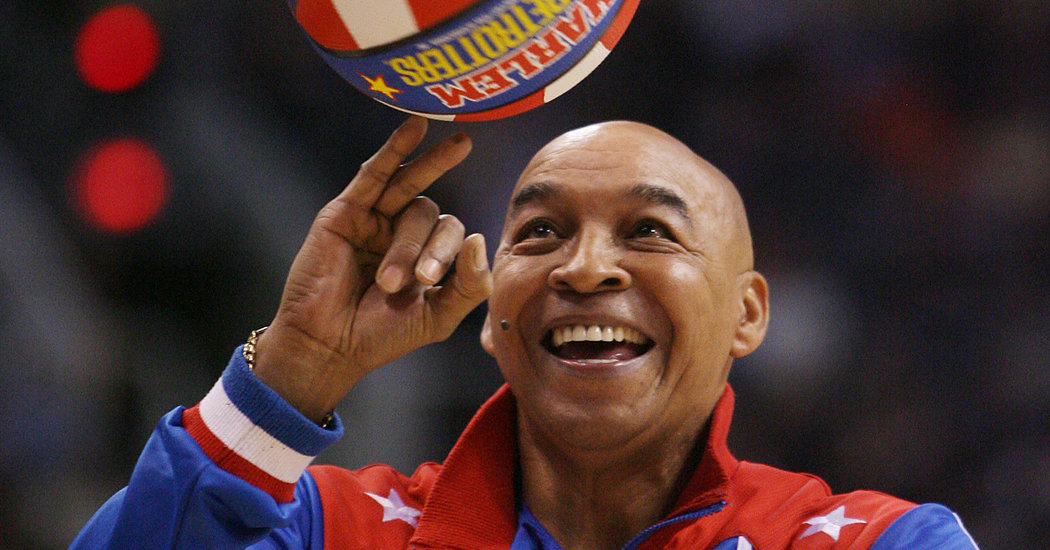 Fred “Curly” Neal, whose dribbling wizardry made him one of the most well-known members of the beloved Harlem Globetrotters traveling basketball team, died on Thursday at his home near Houston. He was 77.

The team announced the death but gave no other details.

Nicknamed “Curly” upon joining the Globetrotters in a humorous nod to his shaved head, Neal played in more than 6,000 exhibition games for the Globetrotters from 1963 to 1985, mostly against the Washington Generals, their hapless foils.

In one of the most highly anticipated elements of the Globetrotters’ routine, Neal would dribble all over the court, frequently sliding on his knees, never losing control of the ball no matter how close to the hardwood he had lowered himself. Then he would bounce the ball through a flailing defender’s legs near the free-throw line and dribble in for an uncontested layup to finish off the move.

“Oh my gosh, he revolutionized ball handling,” Nancy Lieberman, who played for the Generals against the Globetrotters in 1988, said in a phone interview. “Everything you see Kyrie Irving doing and Steph Curry doing now, all of it started with the Trotters. The Trotters made dribbling a show.”

Neal’s trickery established him as one of the team’s foremost stars, alongside the likes of Meadowlark Lemon and Hubert “Geese” Ausbie, and helped the Globetrotters’ traveling show become a regular feature of ABC’s “Wide World of Sports” in an era when the National Basketball Association did not have a robust national television presence as it does now.

At the height of the Globetrotters’ popularity in the 1970s, with Neal’s supreme ball-handling skills and long-distance shooting as prime attractions, they inspired multiple animated TV series, including “Scooby-Doo Meets the Harlem Globetrotters” in 1972.

They also performed some of their basketball tricks on “The Ed Sullivan Show,” accompanied as always by the strains of “Sweet Georgia Brown,” their trademark song. And they played themselves on television shows like “The White Shadow” and “Love Boat” and in a made-for-television “Gilligan’s Island” movie.

“His basketball skill was unrivaled by most, and his warm heart and huge smile brought joy to families worldwide,” Jeff Munn, the Globetrotters’ general manager, said in a statement on Thursday. “He always made time for his many fans and inspired millions.”

Frederick Neal was born on May 19, 1942, in Greensboro, N.C., and played collegiately at Johnson C. Smith University in Charlotte, where he averaged 23 points per game as a senior to earn All-Central Intercollegiate Athletic Association honors. Future N.B.A. stars such as Lou Hudson and Al Attles were high school and college contemporaries, but Neal was not drafted by an N.B.A. team and struggled to land a job in the pros.

But an offer soon materialized with the Globetrotters, and Neal eventually succeeded Marques Haynes, a 1992 inductee into the Basketball Hall of Fame, as the Globetrotters’ ball-handling sensation.

Neal and Haynes “taught me how to dribble,” Isiah Thomas, the former All-Star guard who led the Detroit Pistons to back-to-back N.B.A. championships in 1989 and 1990, said on Thursday on Twitter.

“I was blessed to be close with Curly and Marques Haynes,” Lieberman said. “Curly learned from Marques and took it to a whole different level.”

The Globetrotters retired Neal’s No. 22 in 2008 in a ceremony at Madison Square Garden — an honor bestowed upon only four other players in the team’s history: Wilt Chamberlain (13), Reece “Goose” Tatum (50), Haynes (20) and Lemon (36). He continued to serve as a Globetrotters ambassador long after he stopped playing.

Neal, though, recalled very humble beginnings to his Globetrotters career in his 1983 interview with The Times, saying: “I got a questionnaire letter, as a free agent. I would have to pay my way to camp. The Globetrotters sent me a plane ticket and gave me room and board.”

Another challenge, he said, was learning how to entertain fans as part of a traveling basketball troupe renowned for throwing buckets of confetti — or water — on fans sitting courtside.

“I didn’t know anything about being funny,” Neal said.

Information on his survivors was not immediately available.

In an interview with bullz-eye.com in 2008, Neal revealed that he had actually begun shaving his head at age 12 — long before he got his nickname.

“The kids in the neighborhood, we decided to do something mischievous,” Neal said. “My mom didn’t like it at first. She said, ‘What happened to you?’ And I said, ‘I went to sleep in the barber’s chair.’”

Neal stuck with that look throughout his high school and college career. He said it was Bobby Milton, the Globetrotters’ coach when Neal arrived, who decided, “We’re going to call you Curly.”