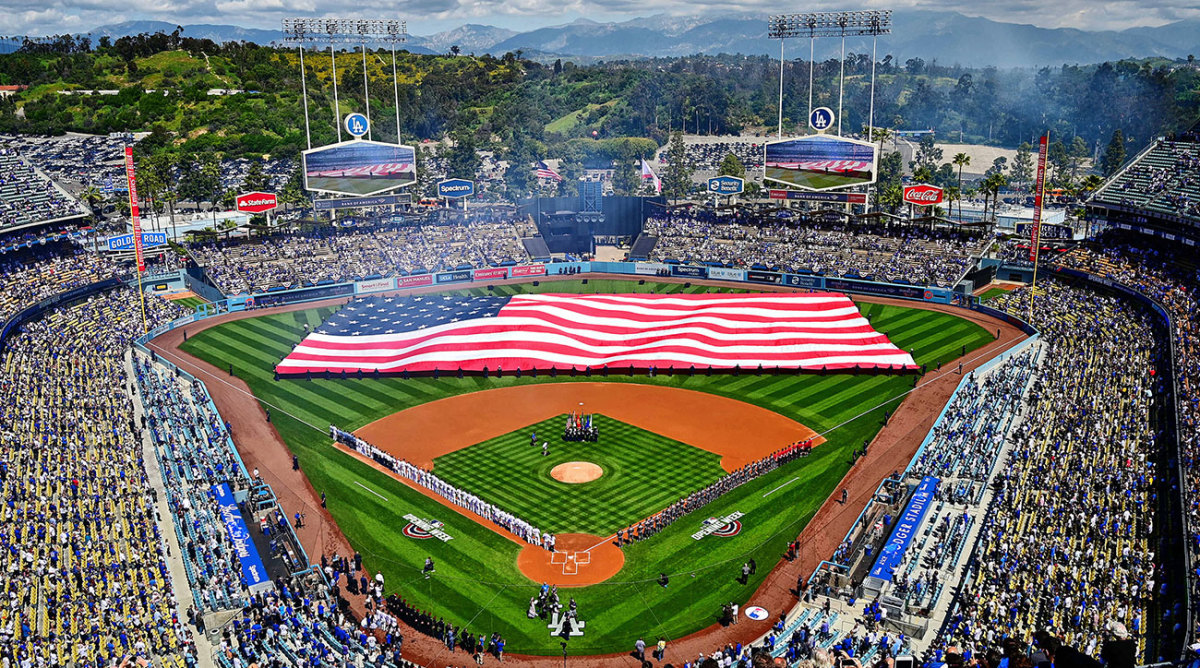 If you’ve ever seen an enormous American flag unfurl across an MLB diamond or NFL field, you’ve seen her work. The Utah woman is the founder of 50 Star Productions—the nation’s preeminent massive-flag-rental company. And as professional sports have shut down due to the coronavirus, Barnett has found herself in the same position as many small business owners. Her work has essentially disappeared overnight: A world with no sports has no demand for giant flags.

Barnett had been scheduled to provide a flag for 12 Opening Day games on Thursday. This typically marks the start of a new busy stretch for her after the bustle of football season has ended. But over the last few weeks, almost all of her scheduled events have been canceled or postponed indefinitely. (There’s just one left on the calendar: NASCAR’s Coca-Cola 600, which, for now, is still scheduled to take place at the end of May.)

“As the time continues to tick, I’m getting a little more anxious, a little more stressed,” says Barnett. “When you calculate the scenarios and it may be being out of work for five months—it gets a little heavy on my heart.”

Barnett, who lives and works in a suburb of Salt Lake City, does between 100 and 130 flag displays each year. Almost all—“99%,” she estimates—are sports or sports-adjacent. Most of those are MLB or NFL, but she also provides flags for events such as marathons, rodeos and soccer matches. Even her work outside of big-time professional sports involves large gatherings of people, which means that all of it is now gone.

“Obviously, at some point, it would get to the point where I would have to make another choice until sports kick back up again,” Barnett says of the potential for having to look for another job. “We just have to sit and be hopeful. At the end of the day, if baseball goes away—which would be such a bummer—we’ll just keep our fingers crossed for football.”

The work may look straightforward, but it’s a strikingly involved process, with dozens of volunteers needing to use expert timing to unroll a flag that weighs hundreds of pounds. Which is why professional teams come to Barnett, master of the art and keeper of the flags.

While a giant flag is now a reliable presence at important games, teams generally do not have their own flag on-hand. They can be expensive, as much as tens of thousands of dollars, for an item that an organization could only use a few times a year. They require proper storage and specialized maintenance. So teams use Barnett and 50 Star Productions. Her biggest flags are 150-by-300 feet, large enough to take up most of a football field, and 1,100 pounds that require 150 volunteers to hold across 14 separate pieces. (That’s each individual stripe plus the union rectangle—clipped together with airflow at the seams to ensure it cannot catch a breeze and function as a dangerously enormous sail.) Not every game calls for the big kahuna, though, so Barnett also offers three smaller sizes of standard rectangular flag. If a team wants a more inventive display, there are flags shaped like a map of the country, flags cut into stars and flags separated into banner strips. Just to unfurl them is “a show,” she says.

Barnett has not had to go through with any formal layoffs, as she is the only full-time employee at the company, which she started more than a decade ago. But there are roughly 25 contractors whom she works with regularly to assist teams around the country with the set-up and unfurling process, and for now, everything is on hold.

Other than flight cancellations, due to the nature of her work, Barnett’s sudden hiatus hasn’t required much logistical headache. She already has storage and does not have to worry about any potential supply chain disasters. “The nice thing is that my inventory is still going to exist when things start back up,” she says. “We’ll be ready to go. We’d be ready to go tomorrow.” Now, all that’s left to do is wait. She’s busy with her 9-year-old twins, who are suddenly home from school like so many other children around the country, while she wonders how long it will be until she can unfurl a flag for a show again.

“It’s just stressful for people like us,” she says, “For the whole sports world, really.”