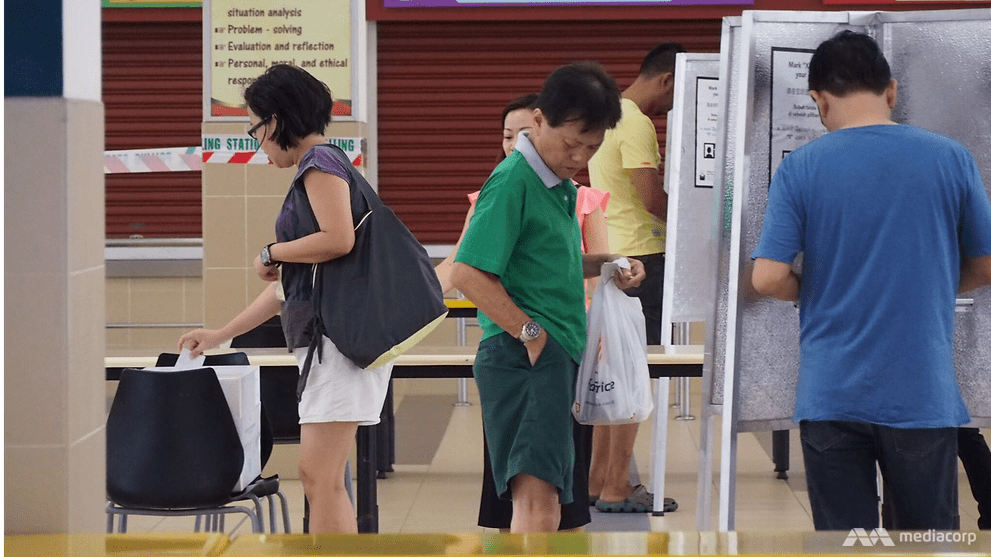 SINGAPORE: One of the most common precautions most of us encounter each day during this coronavirus outbreak has been advisories urging people to practise good hygiene and social distancing.

But elections will challenge these public norms officials are painstakingly putting in place.

Standing close to people at crowded rallies, handling personal identification and voter slips, and heading to booths others have just used to exercise your voting rights all make for a lethal combination that could increase the risk of community transmission.

For this reason, the ongoing Democratic party primary voting in the United States, South Korea’s National Assembly election in April, and a possible Singapore election amid the COVID-19 outbreak should concern election commissions, political leaders and voters.

READ: Commentary: So what if the Electoral Boundaries Review Committee’s report is out?

POSTPONING ELECTIONS IS NOT STRAIGHTFORWARD

It is easy enough for national and local governments to invoke regulatory powers to prohibit large public gatherings such as concerts or sporting events, and for venue or event organisers to similarly decide so at their own initiative. Postponing elections, however, is a more difficult political and legal decision.

In many jurisdictions, national and local governments are empowered under existing constitutional or legislative provisions during national emergencies to postpone elections.

US states, including Connecticut, Georgia, Kentucky, Louisiana and Ohio, have in recent weeks postponed their primaries to select the Democrat presidential nominee, given growing concerns over the coronavirus.

But the challenge to seeking a mandate to postpone elections, if not already built into a political system, becomes more complex and could distract policymakers from needed attention on combating the COVID-19 outbreak.

A postponed election may also give the impression the incumbent government cannot competently manage a public health emergency or seeks to take advantage of the situation to extend its term in office.

After the Sep 11 terrorist attack, New York City Mayor Rudy Giuliani, whose term was scheduled to end on Jan 1, 2002, sought an extension his term.

He received minimal support with commentators noting that neither the United States nor New York City has ever postponed the transfer of power, because the public was convinced it could not get along without the current incumbent and that the very concept went against the concept of being governed by the rule of law.

READ: Commentary: Imagine holding the US elections during a COVID-19 outbreak

Where the political and legal bar to postpone an election is high, most electorates will generally prepare for a safe election, notwithstanding the COVID-19 outbreak, particularly where there is a growing expert consensus that the pandemic could last a year or more.

LESSONS FROM PAST AND RECENT ELECTIONS

Asia’s SARS outbreak in the first half of 2003 did not coincide with a significant election, with national elections in Cambodia and Japan and local elections in Hong Kong occurring in the second half of the year.

Similarly, the 2015 Middle East respiratory syndrome outbreak in South Korea did not coincide with an election.

More recent developments may be instructive. Israel held a parliamentary election in early March amid a brewing outbreak.

The Israeli health ministry encouraged voters to exercise their democratic right to vote and re-assured the public of safety and hygiene standards at polling stations.

Eligible voters under home quarantine after travel to locations in Asia and Italy were allowed to drive to designated pop-up polling stations created especially for them. Israel’s red cross, the Magen David Adom, supplied personnel to staff the voting stations wearing protective gear.

In Taiwan, which has avoided huge surges in cases seen in neighbouring territories, the Kuomintang’s chairman election on Mar 7 saw new safety measures rolled out at polling stations, with regular disinfections, social distancing and masks worn by staff. The KMT urged voters to first take their temperature at home and refrain from voting if they were feverish.

Still, the outbreak also saw voter turn-up at 36 per cent, compared to 58 per cent at the last KMT chairmanship election in 2017.

As most regions around the world implement lockdowns, quarantines and self-isolation, there will be knock-on effects for the political campaigning period, typically filled with pomp and generating strong public interest.

Candidates and party officials must wrestle with how best to adjust day-to-day operations during this season, a challenge made more formidable when face-to-face interactions have remained the mainstay of most political campaigns around the world, with meet-and-greets, walkabouts and rallies dotting the electoral calendar.

READ: Commentary: Nobody expects to be in the epicentre of a pandemic, so be kind to healthcare workers

Such activities requiring close contact should be reduced, if not eliminated, to pare down physical contact between candidates or staff and voters. Mass events like rallies are potential super-spreader events that should be done away with.

In the US, Democratic presidential candidates Joe Biden and Bernie Sanders cancelled primary night rallies, a prudent decision that avoids the risk of large crowds congregating in a single venue. The Washington DC debate between the two was held with no physical audience.

Both Biden and Sanders have ceased in-person events, choosing instead to focus on virtual meetings, broadcasted interviews and speeches, while their campaigning machineries switched to mass texting, video conference calls and Facebook live events.

AT THE POLLING STATION

Authorities must balance encouraging voter turnout against the need to reduce congregating and visits to polling stations by vulnerable population segments such as the elderly.

Polling stations dos and don’ts such as those issued prior to Singapore’s 2015 general election typically refer to facility safety or prohibited activities rather than virus prevention measures, and should be updated and publicised as early as possible prior to the vote.

Around the world, election commissions are considering opening a larger number of stations, in facilities that have sufficient air circulation, requiring disinfection every few hours, with sufficient space inside and outside to allow voters to queue with at last 1.5m between each person and staff. Pens or pencils should be single-use.

READ: Commentary: Social distancing need not be rude or weird. Here’s how to do it right

We must expect polling stations to also implement temperature screening, provide and instruct on masks and sanitisers, put medical resources on standby, and ensure all polling station staff are well versed in standard operating procedures with regard to sick voters.

Staff should also be instructed on measures to check identification and notifications (such as Singapore’s poll cards) without being in close contact. A redundancy plan is necessary for voters eligible to use that station, in case it must suddenly close.

Some US states allow in-mail ballots and are preparing to issue detailed instructions on requirements for witness signatures and timelines for ballots to be distributed and received.

Others are considering scaling up curbside voting, typically reserved for people with disabilities, so voters can vote without getting out of their cars, or even e-voting but the US Democrat Iowa caucus has shown tech is no panacea and technical glitches can feed misinformation.

Where laws permit, mobile polling stations should be set up to allow populations vulnerable to illness, such as the elderly in assisted living facilities, to vote early.

Where voting also involves overseas diaspora populations who can vote at embassies and consulates, staff must be trained on new safety measures to accompany voting, including contact tracing and precautions for voters with a travel history to infected regions.

The coronavirus may reshape political campaigning and inform the logistics of how voters choose their leaders.

But with the right precautions, there’s no reason a pandemic should threaten the ability of candidates to get their message out to the people or stop voters from safely exercising their right to vote.

Ross Darrell Feingold is director, business development at SafePro Group, a consultancy that advises corporate clients about travel safety and risk mitigation around the world.