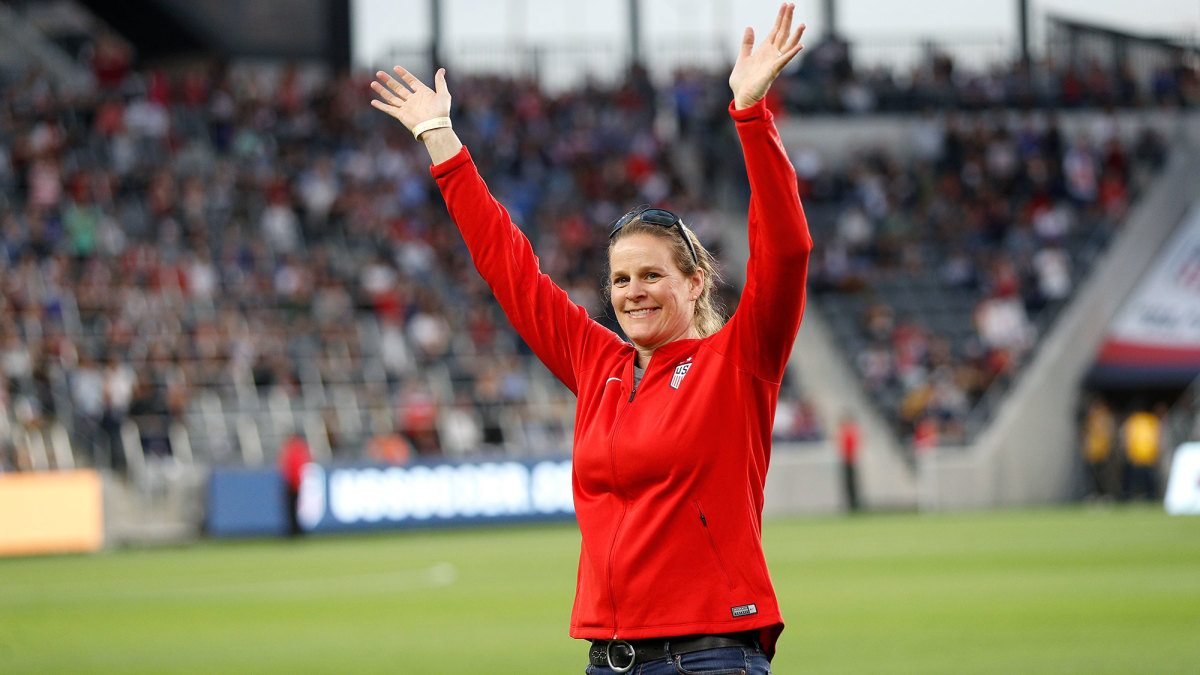 Mia Hamm was always one of the most intimidating players in soccer, hypercompetitive to a fault, the owner of a death stare that could reduce opponents and teammates alike to a puddle of flop sweat.

But it was never that way for Hamm with her U.S. teammate Cindy Parlow. It wasn’t that Parlow was a big talker, but while most of Hamm’s younger teammates were scared to say a critical word to the superstar, Parlow wouldn’t hesitate. On one occasion, Hamm remembers being called offside and yelling at teammate Julie Foudy.

“You just need to play the ball!” Hamm bellowed at Foudy.

Parlow wasn’t having it. She turned to Hamm and countered: “You just need to stay onside!”

“That’s just a simple thing,” Hamm told Sports Illustrated this week, “but there are a lot of off-field moments where I would make a statement, and [Parlow] is like, ‘Really? Do you really think that way? Have you thought hard about that?’ And I’m like, ‘Oh my god, no, I haven’t.’

“Cindy was always incredibly, painfully honest with you,” Hamm continued. “She didn’t sugarcoat stuff, especially when you needed to hear it. And I appreciated that as a friend and a teammate. It was always from the perspective that she cared and wanted to make me better. That made us closer as friends and made me trust her even more, because she wasn’t going to tell me what I wanted to hear.”

That’s something to remember now that Cindy Parlow Cone is the unexpected president of U.S. Soccer, the vice president who ascended to the top spot two weeks ago after the resignation of Carlos Cordeiro. In interviews with her former U.S. teammates, it became clear that 1) Parlow has a no-nonsense personality that will be crucial to creating change at a federation that needs it, and 2) She won’t be in this alone, since some of the greatest U.S. players of all time, the ‘99ers, are behind her with their full support.

“Whenever I talk about leadership to kids at my academy, I say Cindy never made it about her. It was always: ‘How can I make the team better?’” said Julie Foudy, one of the ’99 team captains. “She was one of those players who would start a game, then sit on the bench, would start a game, would sit on the bench. But she would never sulk or put her head down or have bad body language.

“And mind you, she’s not in this for political reasons,” Foudy added. “She didn’t seek to run for president. In large part, she took this vice presidency because she knew there was an important next step for U.S. Soccer, and that a player should be part of that conversation.”

Parlow Cone’s challenges are enormous. She has to try to resolve the gender-discrimination lawsuit by the U.S. women’s national team players, which she said she was eager to do on Tuesday. She also has to rebuild trust with the USWNT, deal with several other federation lawsuits, improve the inclusiveness of Latinos, African-Americans and other minorities, fix the dysfunctional culture on the board of directors and prevent people with their own agendas from filling the leadership void.

“I think Cindy is a perfect person for the job,” said Tiffany Roberts Sahaydak, her old teammate from the ‘99ers and the University of North Carolina, who now coaches at Central Florida. “She’s a really confident person, and I don’t think she’ll be manipulated. And she has a high level of integrity. She’ll stand up for what’s right, and she’s not afraid to speak.”

Foudy, for her part, points out that Parlow Cone has a thankless job as president, one that requires an immense time commitment but doesn’t pay a dime. And unlike predecessors Cordeiro (who was a Goldman Sachs executive) and Sunil Gulati (who had several major living expenses covered by his job at Columbia University), Parlow Cone has an everyday job (as the director of youth coaching for girls at North Carolina FC) and is the parent of a young child.

What’s more, U.S. Soccer remains very white, especially among its leadership. The federation “still has this mom-and-pop mentality—and it’s still a lot of pop, not so much mom and pop,” said Foudy, who thinks the president and the vice president should be paid positions. “It’s clearly not hitting the diversity that this country represents with its football community. I mean, that’s showcased over and over again.”

Then there’s the PR aspect for Parlow Cone. In the wake of a Neanderthal legal strategy from the federation, one she says she wasn’t aware of before it became public, Parlow Cone and the federation as a whole have to show things are going to be different at U.S. Soccer now.

“Her challenge, as I’m sure Cindy would say, is making people understand that what was in those 2,600 pages is not something that she or many people at U.S. Soccer believe,” Foudy said.

At the very least, Parlow Cone appears unlikely to make any rash decisions. Foudy described her as a problem-solver, and Portland Thorns owner Merritt Paulson said Parlow Cone is “the most even-keeled head coach I’ve employed across both organizations,” which also includes MLS’s Portland Timbers.

“Very few coaches in any professional sport are batting a thousand in terms of winning league championships, and she’s one of them,” Paulson said of Parlow Cone, who won the NWSL title in 2012 and left on her own volition to move back to North Carolina with her husband, John Cone. “There’s a coaching mantra of keeping your highs low and your lows high, and hopefully that characteristic is something she can lean on right now when they’re dealing with the whirlwind [at U.S. Soccer].”

What’s clearly the case is that Parlow Cone will have the backing of many of the biggest names in American soccer. When Hamm first contacted Parlow Cone after she became the president, she said she wasn’t calling to get the inside scoops, but rather to offer her help as a friend.

“I was just saying, ‘I am sure your head is spinning right now, but we’re going to support you in every way we can,’” Hamm said. “’Because we love the national teams. We believe that you can do good and that you want to make a positive change. We’re here for you.’”