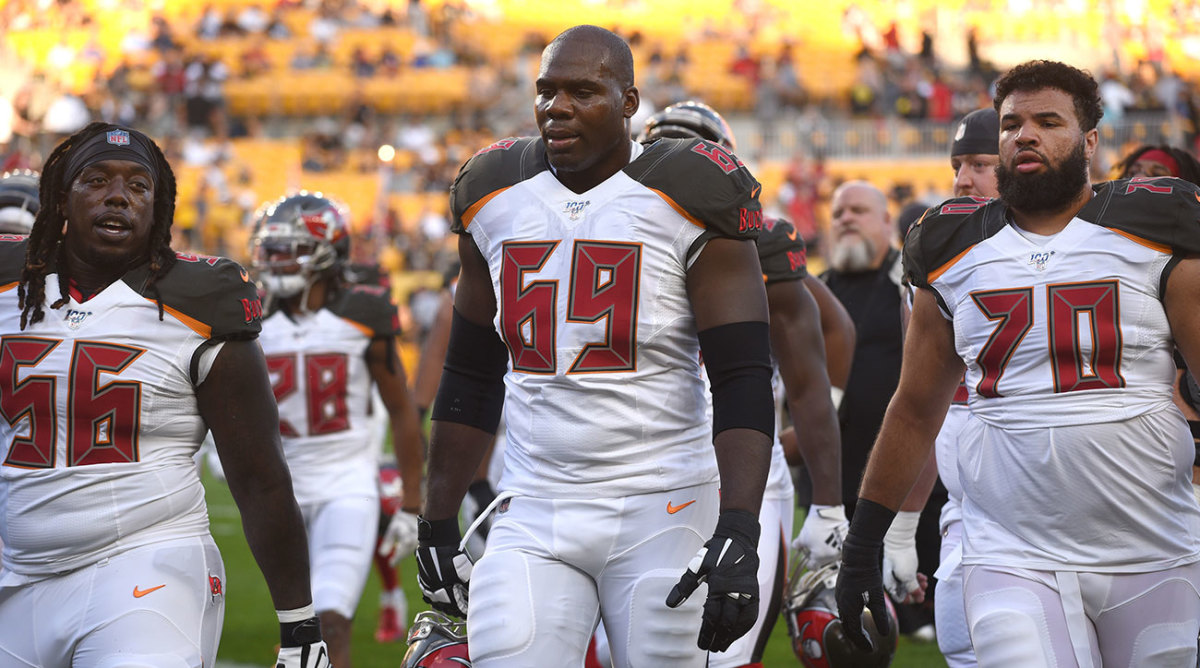 Much has been made about Atlanta’s offense being comprised entirely of former first-round picks. Impressive indeed, but still it’s not an offense without flaws. Though Russell Gage is respectable, Atlanta lacks a major slot weapon. At center, 34-year-old stalwart Alex Mack did not flash on film as much last season and is now in the final year of his contract. He’ll soon need to be replaced. And at running back, recently acquired ex-Ram Todd Gurley is a total tossup and, like his colleague, Brian Hill, will be a free agent in 2021. The Falcons may want to consider drafting another zone runner to pair long-term with Ito Smith.

But before that, urgent needs on defense must be address. The dismissal of cornerback Desmond Trufant leaves 2019 fourth-rounder Kendall Sheffield and 2018 second-rounder Isaiah Oliver as the starters outside. The speedy Sheffield became a full-time player by October of his rookie season, and the Falcons appear comfortable playing him either inside or outside, which was Trufant’s role years ago. Oliver is more of a wild card. In some games he has traveled with physical No. 1 receivers, but in others he has been kept out the base 4-3 lineup and demoted to just playing in nickel. As insurance here, and to provide another layer of depth so that slot corner Damontae Kazee can continue to moonlight at safety when need be, the Falcons must find a sturdy corner who has the long arms and ball-tracking ability that head coach Dan Quinn’s old Seahawks style Cover 3 scheme demands.

That scheme is also dependent on having a quality four-man rush. Inconsistency here is a big reason why the Falcons had just seven wins each of the last two years. Even if they are confident that 2017 first-rounder Takk McKinley can finally break out in Year 3 (and if they were, they probably would have exercised his fifth-year option already), they could use another edge bender to play opposite free agent pickup Dante Fowler. That’s a need they must address early, as is linebacker, where the depth behind Foyesade Oluokun and Deion Jones is nonexistent. Because the scheme calls for linebackers to sink back fairly deep in coverage, it’s imperative that whoever Atlanta gets here have the speed to eat up ground quickly when pursuing tackles after the catch.

Top-100 Targets (Atlanta owns picks 16, 47 and 78): The Falcons might have their choice of the non-Chase Young edge players and non-Jeff Okudah corners. LSU EDGE K’Lavon Chaisson, a pure burner (and, at this point, only a burner), would seem to fit better than Penn State’s Yetur Gross-Matos or Iowa’s A.J. Epenesa. Among the Round 1 corners, Florida’s C.J. Henderson and Utah’s Jaylon Johnson should both be considered if they’re available (and at least one of them should make it to 16). Alabama’s Trevon Diggs might be something of a reach in the top 20, but he has the physical profile (6′ 1″, 32 ¾-inch arms) to go along with enormous upside. If they hold off until Round 2, Clemson’s A.J. Terrell and Virginia’s Bryce Hall are a couple of long corners who could fall out of the top 40. As far as finding an heir apparent to Mack, Temple’s Matt Hennessy could make it to Pick 78. Day 2 slot receiver options would include dynamic-but-risky picks like Kentucky’s Lynn Bowden and Texas’s Devin Duvernay, or more polished guys like Vanderbilt’s Kajila Lipscomb and Ohio State’s K.J. Hill.

A full-scale rebuild is in order even though the Panthers just shelled out $33 million guaranteed for veteran QB Teddy Bridgewater. That move, most likely, was a function of GM Marty Hurney and new head coach Matt Rhule understanding that in order to rebuild most efficiently and effectively, it’s important to have at least a serviceable QB who can execute the designs that you’re trying to make foundational. Drafting seventh overall, behind QB-needy teams like the Bengals, Dolphins and Chargers, the Panthers understand they’d have to fork over too much long-term capital to get one of this draft’s marquee QBs. And so they’ll go with a Bridge(water) QB for now.

As for what this team needs around that QB…offensively, it had been more juice at wide receiver, until the signing of former Jet Robby Anderson. So now the focus can go to finding livelier interior offensive linemen who will afford Rhule and OC Joe Brady the schematic options in the ground game that they’re expected to lean on. A high-level tight end would also help both the run and pass game. With Greg Olsen’s release, Carolina’s current top tight end is 2018 fourth-rounder Ian Thomas, who can align almost anywhere in the formation but does not quite have the explosive traits to be a true No. 1.

On defense, 64-year-old coordinator Phil Snow has spent almost his entire career in college football (save for a four-year stint with the Lions from 2005-08, where he was part of a Tampa-2 zone-based scheme under head coach Rod Marinelli and defensive coordinator Joe Barry). No one outside the Panthers building can be completely sure right now what type of scheme, exactly, Snow will run.

Whatever he runs, he’s facing a tall order. His D-line needs more depth, both outside and especially inside. In Shaq Thompson and Tahir Whitehead he’ll at least have fast linebackers, but that doesn’t mean the sudden absence of Luke Kuechly won’t be felt. The secondary has just one clear-cut starting corner: boom or bust 2018 second-rounder Donte Jackson, who can cover faster receivers but also found himself on the bench for the last two weeks of 2019. At safety, free agent signing Juston Burris is worthy of a starting look (which his two-year, $8 million contract suggests he’ll get) but there are no proven options behind him and Tre Boston.

And so in short, the Panthers really can’t go wrong if they just take the best defensive player available throughout this draft.

Top-100 Targets (Carolina owns picks 7, 38 and 69): If Tua Tagovailoa or Justin Herbert make it to 7 the Panthers would have a decision on their hands. If they don’t, the seventh pick will likely come down to whomever falls between Clemson LB Isaiah Simmons, Ohio State CB Jeff Okudah and Auburn DT Derrick Brown. They could get a big corner to complement Jackson with the 38th pick—Clemson’s A.J. Terrell and Virginia’s Bryce Hall could both be available. Despite signing Matt Paradis last offseason, you wonder if Temple center Matt Hennessy, recruited by Rhule, could be an option in the third. Baylor DL James Lynch is another Day 2 prospect with direct ties to Rhule, having won Big 12 Defensive Player of the Year while playing for Rhule last season.

This is the NFC’s most complete offense, affording New Orleans the luxury of drafting for the long-term. The notable contributors who are not under contract after this season are running back Alvin Kamara (whom the Saints will not let get away), flex man Taysom Hill (another likely “won’t let get away” guy), tight end Jared Cook and right guard Larry Warford. Drafting eventual replacements here would be prudent.

The defense is in equally great shape for 2020, with no major weak spots and athleticism at all three levels. Next year, All-Pro linebacker Demario Davis and the next top three guys in his unit are due for new contracts. So is free safety Marcus Williams, who is in the last year of his rookie deal. Williams will be a priority re-sign option, but it’s not clear if he’s worth franchise tagging. The Saints are already committed to Malcolm Jenkins at safety and, by this time next season, they’ll likely view budding star Chauncey Gardner-Johnson as a cornerstone player. Gardner-Johnson is on his rookie deal so perhaps there is still room to pay Williams, but drafting a versatile DB with centerfielding potential would give the Saints options and leverage here.

There are also expiring contracts for pass rushing defensive tackle Sheldon Rankins and backup defensive end Trey Hendrickson. It’s hard to go wrong with adding defensive line depth. Overall, the draft plan is clear: Get the best developmental defensive projects available. With just five picks in their holster, including no second-rounder, don’t be surprised if the Saints trade back to increase pick volume.

Top-100 Targets (New Orleans owns picks 24 and 88): Being short on draft capital is nothing new for the Saints. Michigan OL Cesar Ruiz would be a high-ceiling developmental prospect on the interior, or Notre Dame TE Cole Kmet could come in as Cook’s heir apparent. If they go with a deep safety to complement Gardner-Johnson longterm, LSU’s Grant Delpit is the right fit, as is raw-but-rangy Ashtyn Davis of Cal. Local OL product Lloyd Cushenberry of LSU would fit as a developmental prospect who can play anywhere on the interior, and would make a lot of sense if he falls to Round 3.

You probably heard that the Bucs addressed their need at quarterback. Now their draft strategy should focus on finding ready-made players who can contribute right away. Part of the reason Tom Brady is here is the Bucs don’t have as many needs as a typical 7-9 team. Their top five picks last season were all spent on defense, and all five wound up playing meaningful roles as rookies, as the Bucs embraced the potholes one encounters when trudging down a whole new schematic path. That path’s destination is Blitzville, as coordinator Todd Bowles’s idea of a good day is one spent attacking quarterbacks. If the Bucs find that an athletic safety or man-to-man corner has unexpectedly fallen to them, they could pounce, but the priority for their picks is on offense—specifically, up front.

Starting right tackle Demar Dotson is gone. Former Colt Joe Haeg is a nice utility backup lineman but can’t be the answer for protecting Brady from edge rushers. One of the most interesting story lines in 2020 is whether Bruce Arians will alter his aggressive, deep-dropback passing game to help get the ball out of Brady’s hand quickly (and safely). Even if the 67-year-old coach makes this change, it’d still be wise to draft big here. (Think of it as taking out a premium insurance policy.)

After that, the need becomes wide receiver; the Bucs are great atop the depth chart (Mike Evans and Chris Godwin) but lacking high-pedigreed options beyond that.

Top-100 Targets (Tampa Bay owns picks 14, 45 and 76): In an ideal scenario, a tackle like Alabama’s Jedrick Wills or Iowa’s Tristan Wirfs falls to 14. If that doesn’t play out, they can address the secondary with Florida’s C.J. Henderson (if the scars of drafting fellow Gator Vernon Hargreaves aren’t too fresh) or Utah’s Jaylon Johnson. If they wait until Round 2 for O-line help, they can choose from the likes of TCU’s Lucas Niang or Connecticut’s Matt Peart. It’s a class that’s rich in the kind of Swiss army knife safeties Bowles loves. If they pass on Alabama’s Xavier McKinney and Minnesota’s Antoine Winfield Jr. early, Utah’s Terrell Burgess would be a nice addition on Day 2.