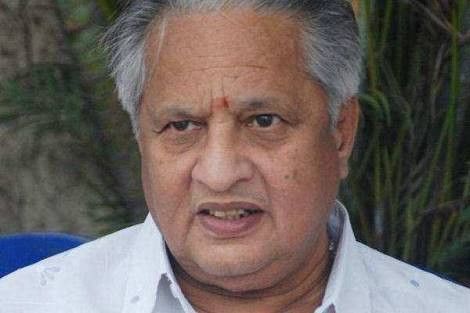 Tamil actor-director Visu died in Chennai on March 22 following a cardiac arrest. He was 75.

Film lovers of the 80s would be familiar with his family dramas that were laced with humour and carried a simple social message.

The first Tamil film to win an Indian National Award was ‘Samsaram Adhu Minsaram’, which was directed by Visu, aside from playing a key role in it.

A stage actor since his school days, Visu entered Tamil cinema as a writer for films including ‘Pattina Pravesham,’ ‘Netrikann’ and ‘Thillu Mullu.’ From assisting director K Balachander to acting and then turning towards direction, Visu established himself as a force to reckon with in the industry.

In his later years he explored television with his popular debate show ‘Arattai Arangam’ on Sun TV and ‘Makkal Arangam’ a talk show hosted on Jaya TV.

Shanthi Krishna who acted in his film, ‘Manal Kayiru,’ opposite S. Vee Shekar, remembers Visu as a disciplined director. Krishna had earlier acted in ‘Shimla Special’, for which Visu was the scriptwriter.

“Visu sir booked me on the sets of ‘Shimla Special’ as the leading lady for ‘Manal Kayiru.’ Visu sir was easy to work with, being on his sets was great fun. It was a great experience working with the legendary Manorama aachi too,” Krishna said.

“Being a stage actor, he was clear about what he wanted,” recollects the actress. “He used to write the dialogues on the sets itself and explain in detail. ‘Manal Kayiru’ was my third film and it ran for 100 days.”

When ‘Manal Kayaru 2’ was being planned, Krishna got a call from S. Vee Shekar to do a role opposite Visu.

“I could not take it up as I was in the US then,” added Krishna.

Director Madhumita of ‘K.D’ fame (Tamil film on Netflix) posted a note on Facebook, remembering Visu fondly as the uncle who stood by her when she first arrived in Chennai with dreams of making movies. She wrote that she was a scared 22-year-old with no prior experience in assisting a director.

“Anyone and everyone said that it was a huge risk for me and my career. One man stood by my family and me and said, “Naan irukken Madhumita, nee va,” (I am here Madhumita, come on). My Godfather Visu uncle. At every step of my career, he has always been there to encourage me and to cheer me on. Visu uncle, the definition of morals and ethics, a legend in his field, a softie at heart, a humane leader, and most of all an exemplary human being.”

Visu won his second Indian National Award for Best Film on Social Issues for ‘Neenga Nalla Irukkanam,’ that was sponsored by the Tamil Nadu government with the Chief Minister Jayalalitha featuring in a cameo as herself.

Visu is survived by his wife and his three daughters.