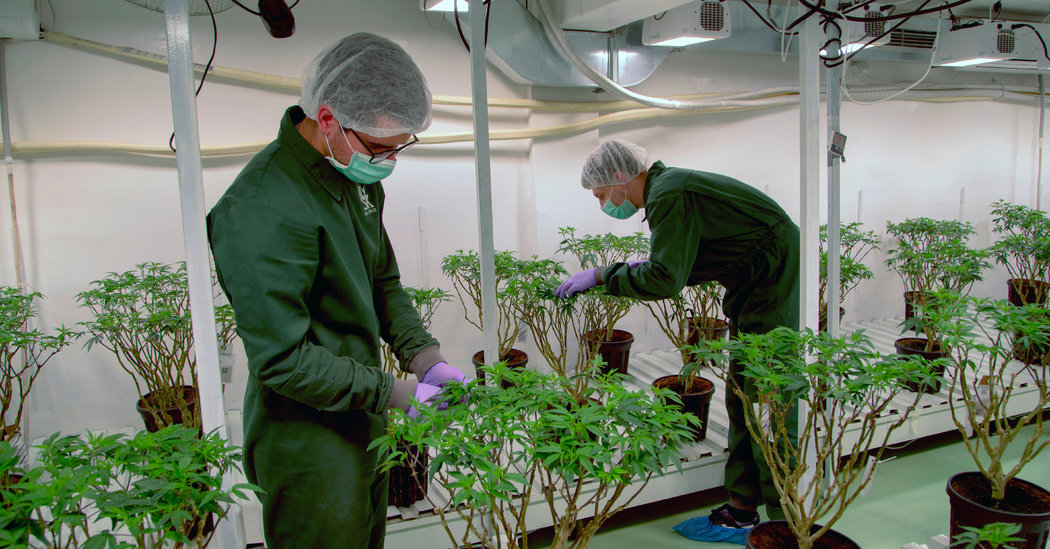 SKOPJE, North Macedonia — In a desolate industrial zone of this capital city, a cannabis grow house is under construction that, when finished, will span 178,000 square feet, about the size of a Walmart superstore. At full capacity, 17 tons of marijuana a year, worth about $50 million, will be harvested. Among the planned offerings is an American strain known as Herijuana, a portmanteau of “heroin” and “marijuana,” which has received some rhapsodic online reviews.

“I feel blown to the dome omg,” wrote a fan on Leafly, a cannabis review site. “It also gave me the ability to rap.”

Pharmacon, the company behind this operation, has everything it needs for a thriving, dome-blowing business, including contracts with buyers in Germany, Poland and the United Kingdom. Construction here in Skopje has slowed in recent days, because new coronavirus regulations restrict the number of people who can work in groups. But the building will soon be completed and then Pharmacon will face a very different kind of impediment: the government.

“They told everyone this is a huge opportunity for a new industry,” said Zlatko Keskovski, a former karate instructor turned cannabis entrepreneur, who works for Pharmacon. “They said they would have a good law passed in a few months. That was almost two years ago.”

Medical marijuana exports have been legal here since 2016. But to date, the law allows only oils, extracts and tinctures, which, measured by demand, are just 30 percent of the market. The other 70 percent is the smokable bud of the plant, known as “flower” in the industry, the sale and export of which remain prohibited.

That was supposed to change in 2018, when government leaders announced that the export law would be amended. Foreign investors were beckoned. Additional licenses were issued. And there was a colorful come-hither last August, when an American cannabis executive named Michael Straumietis, who goes by “Big Mike,” flew in on his private jet, met with the country’s prime minister, Zoran Zaev, and raved to his 2.6 million Instagram followers.

“Let me tell you, this country has huge potential,” he wrote, “and I’m excited to be a part of turning Macedonia into one of Europe’s first Cannabis Superpowers.”

But the promised amendment has been bottlenecked in Parliament amid allegations of corruption. The opposition party says that the prime minister has steered cannabis licenses to relatives and allies, part of a plan to cash in on a coming green rush.

“In December alone, there were 10 licenses issued and there are real concerns that five of them were awarded to people close to Mr. Zaev,” said Orce Gjorgjievski, a member of the executive committee of VMRO-DPMNE, the largest opposition party in the country. “If this isn’t nepotism and corruption, then maybe the Medellin Cartel is a charity organization.”

Government officials say that only one relative of the prime minister has been issued a license, and that they hope to pass the amendment when Parliament reconvenes, which it is scheduled to do in April.

The coronavirus is sure to alter the timing of the eventual debate, because North Macedonia declared a 30-day state of emergency in mid-March and has more pressing matters to consider. But the fight sheds light on a larger mystery: Why does Europe, a continent known for progressive stands on issues like health care and taxes, not have a thriving, international cannabis trade already?

Europeans, it turns out, are conservative when it comes to cannabis, especially compared to the United States and Canada, where recreational marijuana laws have proliferated for years. Even in the Netherlands, where “coffee shops” sell Citrus Haze, Choconesia and other strains, cannabis has never been explicitly legalized. (Sale and consumption are tolerated in modest quantities.) Most European tokers today buy on the black market, with the bulk of the supply coming from Afghanistan via Albania.

“There’s a general fear that if we legalize medical marijuana, it will open the way to recreational marijuana,” said Eoin Keenan, the head of content at Prohibition Partners, a consultancy in London. “Europeans want a more regulated, pharmaceutical model. Once we see that normalized, conversations will advance to adult use.”

Demand for medical marijuana is strong in countries such as Germany and the Czech Republic and growing in the United Kingdom and Ireland, Mr. Keenan said. But to date, only two countries, Portugal and the Netherlands, allow the cultivation and export of medical marijuana. Recently, the slow pace of legalization caused Prohibition Partners to scale back its forecast for the size of the European market. It will generate $2.5 billion in sales by 2024, the firm predicted in its latest report, significantly down from the $39 billion it forecast last year.

Grabbing some of that pie would have significant upside for North Macedonia, a small, landlocked country of just 2.1 million people, where the average monthly income is about $500.

The country has struggled economically since 1991, the year it achieved independence after the breakup of Yugoslavia. A decade ago, the government tried to kick-start a tourism boom by spending $750 million on an ambitious makeover, building hundreds statues in Skopje, including a 47-foot bronze in the city’s center called “warrior on a horse.”

The results made Skopje “the new capital of kitsch,” the mayor of the city’s center municipality complained four years ago. The country’s international branding efforts were complicated last year when it added “North” to its name. It was an effort to appease the Greeks, who have long blocked the country’s entry into NATO and the European Union, claiming that the original “Macedonia” was a part of Greece.

Now, the proper way to refer to all things Macedonian is so convoluted that the government issued an official Q. and A. guide called “North Macedonia Made Simple.” One question asked how to describe lunch with the country’s president.

The nuances of the medical cannabis market here are only slightly easier to follow. Back in 2016, the nascent business enticed Mr. Keskovski, a goateed 50-year-old who tells his life story in animated bursts between cigarette puffs. The former president of the Macedonian Kendo Federation, whose chops and kicks can be watched on YouTube, he had served as the head of the government’s security detail in 2000s.

“It was really a management job, because I had to negotiate and coordinate with 24 different services in the government, like the police, the army,” he said. “Getting into cannabis is management, too — except that in my other job, if I missed something, someone could get killed.”

He found investors in New York City and created NYSK Holdings in 2016. (The company joined with Pharmacon, which is based in Poland, last year.) First, NYSK constructed a 12,000-square-foot growing and extraction operation. To visit it, a kind of hazmat suit is required, as well as a mask and a pair of gloves. It’s to protect the cannabis from the people.

“You’ve got to remember, this is medicine,” said Franz Sima, 31, one of the horticulturists in charge.

Walking down a long hall, Mr. Sima opened a room filled with humming fans, bright lights and row upon row of identical plants. “This is a hybrid of Miracle Alien Cookies and Blue Killer, which is a strain that I created,” he said. “If you were to run your fingers over a stem they’d smell very flowery, grape-y, lemony.”

This facility once focused on just oils and tinctures. Lately, it has been producing “mother plants,” which will be shipped to the new, larger facility. There, branches will be planted and later sold in flower form to foreign buyers.

At least that is the plan. A vote on the amendment that would legalize the export of flower was delayed again in February. The issue became politically charged in recent months, when the number of licenses issued by the government jumped by dozens. That’s when the opposition party began charging that a handful of those licenses would ultimately enrich the prime minister.

Not so, says Venko Filipce, the country’s health minister.

“But getting a license is just a starting point,” he said. “No one is getting rich from a license. It takes a huge investment and expertise.”

To local cannabis activists, the most glaring problem with the current system is only tangentially related to profits. As of now, just one company makes a product for domestic use. It’s expensive, weak and available in only half of the health care system — namely, the half run by the state — according to Janaki Mitrovski of Bilka, a nonprofit that advocates legalization.

“When my mother had intestinal cancer, I, an attorney, had to buy a kilogram from a drug dealer, a client of mine, and turn it into oil myself,” Mr. Mitrovski said. “We as citizens have given these guys a golden business opportunity and in return, so far, we’ve got nothing to show for it.”

The country’s cannabis entrepreneurs are every bit as irritated, for very different reasons. Some have been growing and stockpiling flower in anticipation of the passage of the amendment. If they are unable to sell it soon, they might have to burn it — an expensive and tightly regulated process given that it would be treated like medical waste.

“We sunk $15 million into the new facility,” said Mr. Keskovski, his voice rising. “I’m angry at both sides. They’re fighting each other and we’re collateral damage.”

He spoke while walking around the perimeter of the huge and austere supersize grow house. It was ringed by high walls, barbed wire and security cameras, features that are mandated by regulations.

“I told my partners not long ago,” he said dryly, “if cannabis doesn’t work out, it would be pretty easy to turn this place into a jail.”