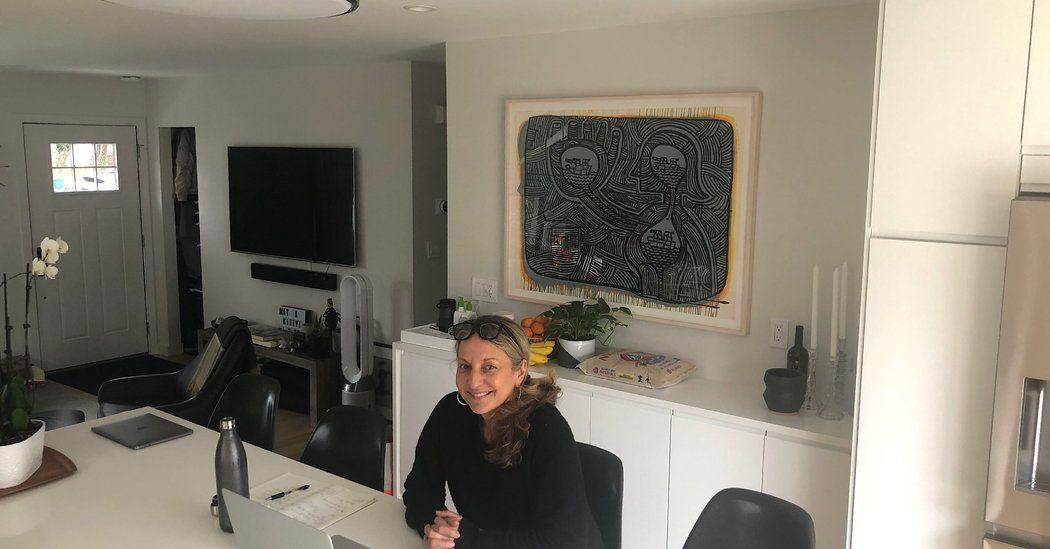 To make sure you can be easily heard, Mr. Mendelson advised using a room with carpeting and window treatments to absorb sound. (He was speaking by phone from his children’s bedroom, which he described as having an area rug, two upholstered headboards, Roman shades and stuffed monkeys.) His home office is “all wood and glass” and a beautiful place to work, he said, but too echo-y for conversations.

And to look your best, Ms. Rottet warned never to sit directly under a light source; it will throw under-eye and next-to-nose shadows. A lamp or window positioned two feet directly opposite to you that lights you evenly will be most flattering and will not cast glare on your screen. (People adept at videoconferences also swear by ring lights: circular fluorescent or LED lamps that reduce facial shadows and the appearance of imperfections.)

To avoid glare and unwanted reflection, Ms. Rottet said you should not let a light source, either from a light or window, be seen directly in the camera. “Have the light source in front of you or beside you, but not in camera view,” she said.

Or Give Them Something to Look At

But how much fun is neutrality? Some homebound workers are finding in videoconferencing setups a chance to project an upbeat attitude or convey a hopeful message.

Ms. Minervini, for example, prefers her own surroundings to be vibrant. “I love having video chats from my kitchen — it’s new, modern and bright, even on a cloudy day,” she said. For a background, she recently hung a mixed-media work by an artist friend, showing swirling waves, battleships, a rustic house and what looks like the profile of George Washington. She described the piece as “energetic.”

Mr. Hart said he chose to sit in front of a “What’s Up? South!” map while teaching remotely because it is attractive and makes a humanistic point: “North and South are relative to each other,” he said. “Depending on your perspective the world may appear upside down, and yet there is no absolute up or down.” He also wears school swag. The message to his dispersed students, he said, is that “we are all still at Amherst regardless of where we are currently.”