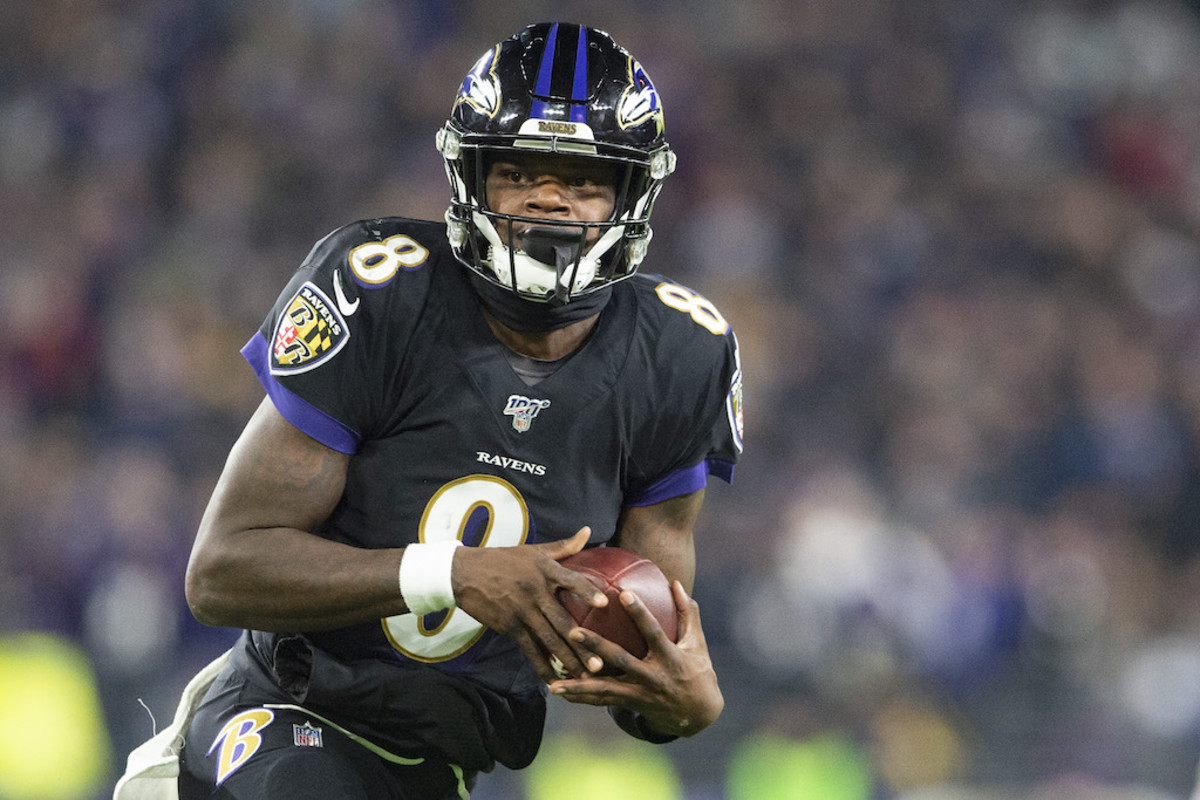 The 2020 NFL Draft is next month and the regular season is slated to kick off a little less than six months from now. However, that hasn’t prevented oddsmakers, like William Hill, from setting season win totals for all 32 teams. These numbers will certainly change following the draft, so it’s often prudent for bettors to get down on any team where there is expected value that may not be there come September.

If you think Lamar Jackson and the Ravens are going to win 12 or more games, you would bet the ‘Over’. Conversely, if you think they’ll regress from last season when they went 14-2 and win 11 or fewer games in 2020, you would bet the ‘Under’. The numbers in brackets are the actual odds. For instance, to win $100 you need to lay down $130 on the ‘Over’ at -130. If Baltimore wins 12 games or more, you’d get a potential payout of $230 (your original stake is returned along with your winnings of $100).

Reigning MVP Lamar Jackson and the Ravens are tied with the defending Super Bowl champion Kansas City Chiefs with the highest posted win total (11.5) of any team on the board.

One of the league’s best defensive units became even stronger following a trade with Jacksonville to acquire the Pro Bowl lineman. The 33-year-old Campbell has 88 sacks during his 12-year career, including a career-high 14.5 sacks in 2017. His 31.5 sacks since 2017 are the seventh-most in the NFL over the past three seasons.

The Ravens have five picks in the first three rounds (among the top 106). The team picks No. 28 in the first round and many mock drafts are projecting they will address their need for an inside ‘backer.

The Ravens are among the favorites to win Super Bowl LV and rightfully so. Baltimore won 14 games last season thanks to an MVP season from Jackson. After breaking down their opponents, my model projects the Ravens winning 12 games. I would lay the -130 here and back the over.

What’s your confidence level in Ben Roethlisberger returning to elite form for this coming season? There is no guarantee the Steelers quarterback will be the same after suffering an elbow injury that ended his season with zero touchdown passes.

Ebron is a solid addition and a proven red-zone target who has hauled in 27 career touchdown passes. The risk is that Ebron has missed 13 games in his six NFL seasons and was shut down last year due to the need for surgery on both ankles. When healthy, he is capable of posting superior numbers like he did in 2018 when he hauled in 66 catches for 750 yards and 13 touchdowns.

The Steelers, after trades highlighted by the acquisition of Minkah Fitzptarick, only have one pick (No. 49) within the first 100 selections.

At first glance, the posted total of nine wins appears to be high. However, Pittsburgh has an elite coach in Mike Tomlin that was able to guide the club to an 8-8 record despite being forced to employ a carousel of quarterbacks. After breaking down their opponents, my model projects the Steelers winning nine games. I think this posted total, solely with a healthy Rothlisberger under center, is spot on.

What’s your confidence level in Baker Mayfield and the dysfunctional Browns who disappointed the ‘Dawg Pound faithful yet again with a 6-10 campaign in 2019? The Browns have an impressive offensive group on paper with quarterback Baker Mayfield, running backs Nick Chubb and Kareem Hunt and stud wideouts Odell Beckham Jr. and Jarvis Landry. Mayfield will have significantly better protection with two new bookend tackles that should also limit eight-man boxes with a potentially more dominant run game.

The moves the Browns have made in free agency so far should help Mayfield immensely. Conklin is a huge upgrade for Cleveland, helping to solidify the right tackle position. Conklin was instrumental in the success of Derrick Henry earning the rushing title in Tennessee last season and now he will be blocking for the running back who finished just behind the former Alabama star (Chubb). Hooper has blossomed into one of the NFL’s best tight ends in four seasons with the Atlanta Falcons. He will become a huge weapon down the seam for Mayfield in the Browns’ 2020 passing attack.

The Browns, who own the No. 10 overall pick, are expected to address their primary need for a left tackle by targeting one of the top players at the position with their first selection.

The oddsmakers over at William Hill are some of the sharpest in the business and once again it’s on display here. After breaking down their opponents, my model projects the Browns winning 8 games. I think this number will come down to whether they can find a way to split their home-in-home with the Ravens. My suggestion is to wait and see if other sportsbooks perhaps offer 7.5 since I lean to the over. However, at the posted total of 8 this is a pass for me once again.

The Bengals are going to improve their franchise with the No. 1 overall pick, but they will struggle in 2020 despite likely adding Heisman Trophy winning quarterback Joe Burrow out of LSU. The Bengals were the worst team in the league last season, going 2-14, and the rebuilding process under Zac Taylor will continue for several more years.

The Bengals did not make any moves that were noteworthy, but they are expected to build through the draft after moving on veterans like quarterback Andy Dalton and cornerback Dre Kirkpatrick.

The Bengals, who own the No. 1 overall pick, currently own a pick in all seven rounds of the draft. It’s a good thing they do because this roster needs help at nearly every level on both sides of the ball.

The Bengals have not finished with a winning record since 2015 and they will not come close to accomplishing that feat in 2020. In Burrow, the Bengals are getting the best quarterback prospect in this year’s draft and one of the best prospects in the organization’s history. My model only projects possible wins over the Jaguars, Texans and Redskins. They would need to steal a win at home over the Browns and a road win over Miami to even push this total. I will gladly grab the under here at plus-odds of +115.