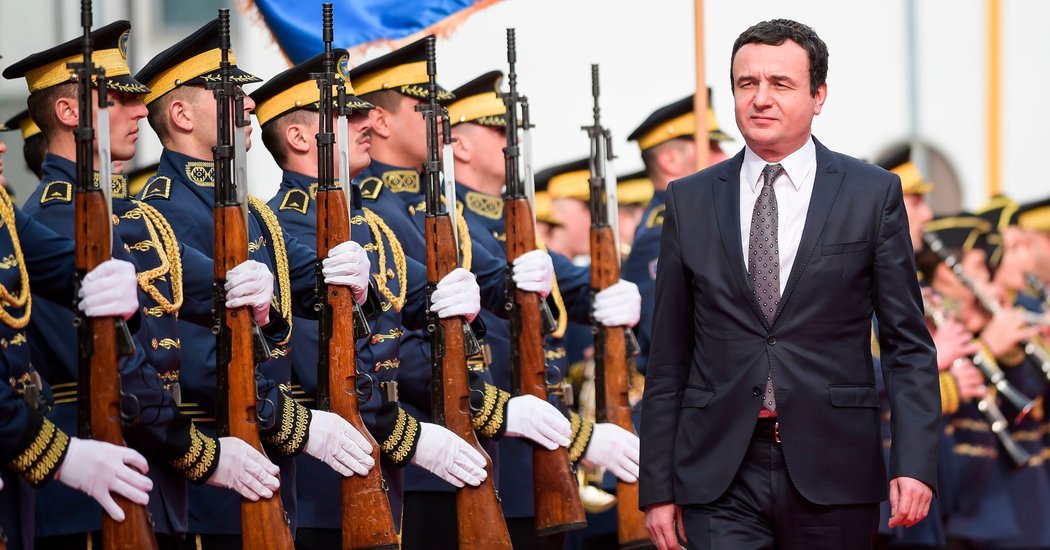 BERLIN — The coronavirus crisis contributed for the first time to the collapse of a national government on Wednesday after a majority of lawmakers in Kosovo voted to bring down the country’s ruling coalition, following a political dispute related in part to the pandemic.

Prime Minister Albin Kurti’s administration collapsed after his main coalition partners sided with opposition parties in a no-confidence vote against their own government, defeating Mr. Kurti by a vote of 82 to 32.

Mr. Kurti remains caretaker prime minister until a new government is formed. But his government’s collapse leaves Kosovo without strong leadership, at a time when most other national governments are seeking to extend their powers to battle the pandemic.

The vote was welcomed by the United States, whose diplomats have placed Mr. Kurti under heavy pressure since his government was sworn in last month because of his opposition to aspects of an American peace deal in the region.

But it was condemned by France and Germany, who issued a joint statement criticizing the recklessness of bringing down a government during a pandemic.

“Kosovo needs a stable and fully functioning government to deal with this crisis,” the statement said.

The vote was partly the result of a dispute in recent days between Mr. Kurti’s party and its junior coalition partners about how to restrict daily life in the country of about 1.8 million in response to the coronavirus outbreak. More than 60 people in Kosovo have tested positive for the virus and one person has died from it, according to the World Health Organization.

To contain the spread of the virus, Mr. Kurti implemented restrictions on citizens’ movement this week — but without enacting a state of emergency.

His coalition partners supported enforcing a state of emergency that would have given greater power to Mr. Kurti’s political rival, President Hashim Thaci, who ordinarily plays a mostly ceremonial role in Kosovar life.

To show their disdain for the political infighting, Kosovars banged pots and pans from their windows on several recent days. More than 10,000 also signed a petition condemning the initiators of the no-confidence vote for a “lack of responsibility for the public interest and civic welfare.”

The vote also has drawn scrutiny to the Trump administration’s diplomacy in the Balkans.

Though the coronavirus was a major factor in its initiation, the no-confidence vote against Mr. Kurti also was triggered by a much deeper disagreement about how to resolve a decades-old impasse between Kosovo and Serbia. The debate pitted Mr. Kurti, a longtime activist, against both Mr. Thaci, a former guerrilla leader, and the Trump administration.

“This is very clearly a consequence of the hardball game that the Americans are playing right now,” said Wolfgang Petritsch, a former European Union envoy in Kosovo.

An American-led bombing campaign helped Kosovo break free of Serbian rule in 1999, but the Balkan neighbors have never signed a final peace treaty.

Serbia has successfully lobbied dozens of countries not to recognize Kosovo as a sovereign state, restricting Kosovo’s ability to operate on the world stage. In retaliation, Kosovo imposes large tariffs on Serbian goods; the duties have cost the Serbian economy at least 160 million euros (about $175 million), according to the GAP Institute, a research group in Kosovo.

Before Mr. Kurti entered office, the Trump administration attempted to end the dispute by brokering a deal between Mr. Thaci and Serbian President Aleksandar Vucic.

As a steppingstone to a final settlement, the United States pushed Kosovo to rescind the tariffs in a gesture of good will to the Serbian government. Hoping to secure a quick deal, American diplomats even discussed the once unthinkable idea of returning parts of Kosovo to Serbia, alarming European leaders who feared the move might reignite ethnic conflict.

But after forming his coalition in February, Mr. Kurti immediately worked to slow the process, placing him on course for a showdown with Washington.

Amid fears that Mr. Thaci might already have secretly agreed to partition part of Kosovo, Mr. Kurti asserted his constitutional right to lead negotiations instead of Mr. Thaci and to keep the tariffs as a means of maintaining pressure on Serbia’s government.

“This is not a matter for our president and the President of Serbia — that time is gone,” Mr. Kurti said in an interview with The Times in Kosovo last month. “Our government, with me as prime minister, will chair the future dialogue between Kosovo and Serbia. The President of Kosovo is a part of foreign policy, but he cannot create foreign policy.”

That stance put Mr. Kurti in direct conflict with Mr. Thaci and Richard Grenell, who serves as a special American envoy on the issue, in addition to his roles as the U.S. ambassador to Germany and acting director of national intelligence.

To coerce Mr. Kurti into removing the tariffs, the United States froze millions of dollars in aid to Kosovo. Donald Trump Jr., who has no official government role, also publicly agreed with a U.S. senator who suggested withdrawing American peacekeepers from the country. Those comments terrified Kosovars, who see an American military presence as a vital guarantor of the country’s security.

The American pressure was specifically cited by Mr. Kurti’s former coalition partners as another reason for withdrawing from his government this week.

“This is a kind of, how should I say, ‘Rambo’ diplomacy,” said Mr. Petritsch, comparing the American approach to that of the hard-charging protagonist of a popular American action-film series.

“As a collateral damage,” Mr. Petritsch added, “they are going to sack a democratically-elected government.”