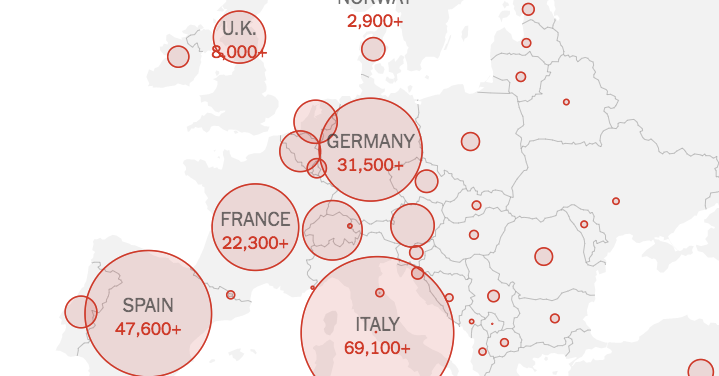 What’s in the $2 trillion stimulus package

The deal hammered out overnight in Washington for about $2 trillion in federal aid to help the U.S. ride out the pandemic is expected to pass quickly in both houses of Congress — though there was some last-minute squabbling on Wednesday — and get President Trump’s signature soon after that.

Our colleague Catie Edmondson in Washington has been reporting on what’s included in the package. A few big things stand out:

Emergency loans for small businesses: Employers who pledge not to lay anyone off can get government loans to help make payroll — and if they keep that promise for the duration of the crisis, they won’t have to repay the loan.

Money to shore up the heath care system: $100 billion for hospitals and health systems, and billions more for testing supplies, protective equipment for health care workers, and construction of more space to house patients.

$500 billion to bail out larger companies: To be doled out at the administration’s discretion, but with immediate reporting of who receives it, an inspector general to watch over the process, and a ban on any of the money going to businesses owned by senior government officials — including the Trump family.

It’s one of the most pressing questions: Do people who recover from Covid-19 develop immunity to the virus?

So far, evidence points to a qualified yes.

If that bears out, it will have big implications. Survivors could return to work before the outbreak is over and help reboot the economy; immune doctors and nurses could care for the critically ill without fear. Crucially, the antibodies their bodies produce could speed the search for an effective treatment.

But a lot is still unknown. For instance: Do the antibodies give lifelong immunity — as with polio or measles — or is the protection narrow and likely to fade, as with antibodies for colds and the flu?

(Even if you can get reinfected, it’s likely the symptoms would be milder the second time.)

Another critical question: Do people who get the coronavirus but do not become very sick produce enough antibodies to protect them, at least until a vaccine can be introduced?

The quickest answers lie in blood tests, which can detect the antibodies. These tests have been used in China, Singapore and some other countries, but are not yet widely available. Researchers in New York have an antibody test that they say can be scaled up quickly, but it is not yet approved.

What’s next: The Food and Drug Administration has approved using plasma from Covid-19 survivors to treat some severe cases. Gov. Andrew Cuomo of New York says the state will be the first to test a serum developed from recovered patients.

‘What I learned when my husband got sick’

Jessica Lustig, an editor for The Times in New York, describes in a first-person essay what life with her family has been like since her husband received a diagnosis of Covid-19, the disease caused by the coronavirus.

“It’s as if we are in a time warp, in which we have accelerated at 1½-time speed, while everyone around us remains in the present — already the past to us — and they, blissfully, unconsciously, go about their ordinary lives, experiencing the growing news, the more urgent advisories and directives, as a vast communal experience, sharing posts and memes about cabin fever, about home-schooling, about social distancing, about how hard it all is, while we’re living in our makeshift sick ward, living in what will soon be the present for more and more of them.”

Jessica, who refers to her husband by the initial T, writes about how jarringly her outlook has had to change:

Now we live in a world in which I have planned with his doctor which emergency room we should head to if T suddenly gets worse, a world in which I am suddenly afraid we won’t have enough of the few things tempering the raging fever and soaking sweats and severe aches wracking him — the Advil and Tylenol that the doctors advise us to layer, one after the other, and that I scroll through websites searching for, seeing “out of stock” again and again. We are living inside the news stories of testing, quarantine, shortages and the disease’s progression.

Not long ago, many Americans seemed to be seeing the coronavirus pandemic the way they see so many facets of life — refracted through pure partisanship.

But the picture has begun to shift, our colleagues at The Upshot write. Political scientists think Republicans’ and Democrats’ feelings about the crisis may soon converge.

Don’t go stir crazy: We’ve begun At Home, a place to find recommendations from our reporters and critics on what to read, play, cook and much more.

Raise a glass: For a successful virtual happy hour, host a small group, dress for the occasion and keep the conversation light.

Join an aid network: Some people are creating virtual groups to help their neighbors and coordinate donations.

Remake your home: We’ve gathered tips for how to add an office, make space for kids and tackle the organizing projects on your to-do list.

We’re playing Yahtzee on Zoom! My mom, sister, cousins and aunts all have our own score cards and dice at home, so we can play together remotely. Reviving old memories, and sharing some laughs like we did growing up.