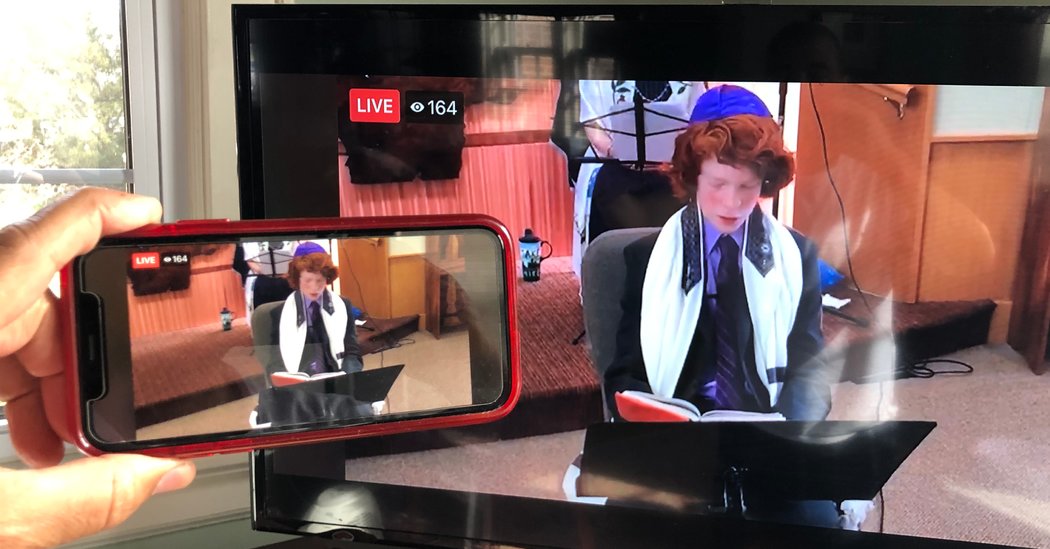 And so, all of a sudden, Zane had a theme for his bar mitzvah: “going viral.”

As the days wore on, the weight of worrying about family members who shouldn’t travel and the danger of assembling a crowd disappeared. Because the difficult decision I was facing was not my own anymore in the wake of new government restrictions. I was just hoping our family would be able to assemble at our synagogue before the state imposed a shelter in place.

One week before the big day, as I was making calls to cancel the caterer and D.J., the initial grief began to dissipate. In fact, I felt giddy. Because what also disappeared was the minutiae that had been keeping me up at night — buying cases of soda and snacks, dropping off goody bags for out of town guests, assembling centerpieces (simple as they may have been) — none of which is truly essential to a religious ritual.

My only concern — aside from hand-washing, telecommuting and home schooling — was ensuring that Zane still felt special. He’s the youngest of three boys, so for 13 years, this has been a familiar challenge. Without a printed program of his service, complete with baby photo and the lyrics from Joni Mitchell’s “Circle Game,” would he have that tangible reminder of just how much I love him? Months ago, he had already started practicing social distancing, barely allowing me to kiss the top of his head before going off to school. Expressions of love had already taken on a new form.

My husband, David, and I sent an email to all of our guests, inviting them to celebrate virtually. “Planning this bar mitzvah has always been about being surrounded by family and friends,” we wrote. “And we really hope that Zane will feel the love looking into a cellphone.”

We told Zane that we would have a D.J. party for his friends at some later time. He did express some disappointment that he wouldn’t have his party. But he understands that there’s nothing any of us can do, and he’s keeping perspective.

Going virtual allowed us to go big, including far more people than we had ever thought possible — kids from Zane’s camp and hockey team, distant cousins, co-workers past and present, schoolmates we haven’t seen since reunions. People from Germany and Israel tuned in, along with family, friends, and even strangers from all over the United States.

At the same time, this allowed us to pare down the moment to what really matters: Recognizing that while we all come from a multitude of faiths, fundamentally we share the same things — a need for connection to something bigger than ourselves, a desire to make this world a better place, and a sense of wonder as our children go about the hard work of growing up.