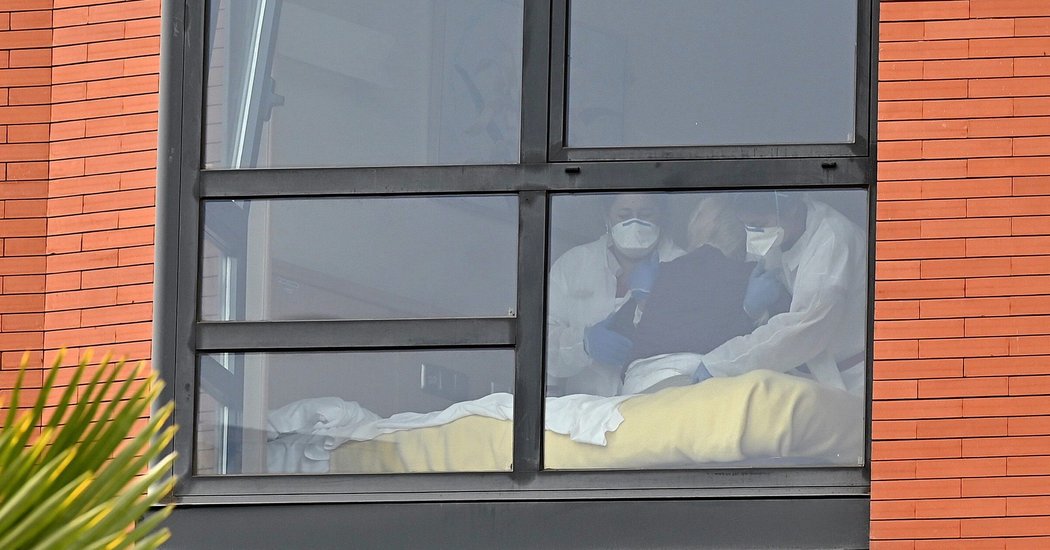 MADRID — Spain prides itself on being a tight-knit society that respects parents and grandparents, where powerful bonds across generations mean that the elderly play an integral part in family life, beyond just helping to look after grandchildren.

So even in a country besieged by the coronavirus epidemic, where the death toll overtook China’s on Wednesday, the news this week about Spain’s nursing homes has come as a particular shock.

Soldiers who were sent to disinfect nursing homes had found people “completely abandoned, or even dead, in their beds,” the defense secretary, Margarita Robles, revealed on Monday. More gruesome discoveries followed, including the revelation of two dozen deaths in a single nursing home in Madrid.

Amid the thousands of tragedies created by the virus, the stories emerging from those homes have shaken the nation not only for their horror, but for undermining the view the Spanish had of themselves.

“We have really kept a welfare state and a strong family support structure, but this terrible news coming from nursing homes must also force us to acknowledge some very serious deficiencies,” Marina Subirats, a well-known, Barcelona-based sociologist, said in a telephone interview.

El País, the country’s leading newspaper, wrote in an editorial that the deplorable situation in some nursing homes had exposed “a bitter black hole in our welfare state.”

Another source of pride for the Spanish has been the country’s robust public health care system; last year, a study ranked Spain as the world’s healthiest country. But that part of the national self-image has also taken a beating from a pandemic that has overwhelmed many hospitals and sickened thousands of health care workers.

Spain’s official death count from Covid-19, the disease caused by the new coronavirus, climbed on Wednesday to over 3,400, almost 300 more than in China. Only Italy, at more than 7,500, has had more fatalities, but Spain’s toll is growing faster. On Wednesday, 738 died in Spain, versus 683 in Italy.

The growth of new infections and deaths appears to be leveling off in Italy, the hardest-hit country, but in much of Europe and around the world, they continue to accelerate. Spain reported about 8,000 new cases on Wednesday, a new high, raising the national total above 47,000, compared to about 5,000 new infections in Italy, which has had more than 74,000.

Spain’s government has not said how many bodies or neglected residents have been found in nursing homes, but Spanish public prosecutors are investigating possible criminal neglect.

At least 24 people were reported dead on Wednesday at a nursing home that had been disinfected by the army over the weekend, in the Madrid district of Chamartín. Two other Madrid homes have recently been similarly decimated.

In the Madrid region, over a fifth of the nursing homes have had cases of coronavirus, authorities said on Monday. Compounding the problem, dozens of their infected employees are now isolated at home.

Countries across Western Europe, which have some of the oldest populations in the world, are struggling to protect the most vulnerable among their aging people — while also acknowledging that the crisis among the elderly, particularly in nursing homes, might be far worse than anyone knows yet.

In Italy, authorities have conceded that their coronavirus death toll did not include those who had died at home or in nursing homes. Similarly in France, officials have said that only those who died in hospitals had been recorded as pandemic-related — a practice they said would change in the coming days.

Last week, a French organization representing nursing homes warned the health minister that the coronavirus could kill as many as 100,000 people in France, given the current state of the homes.

Ms. Subirats, the sociologist, said, “I knew, like most people in Spain, that life was not always easy in a home, but we all had the idea that our elderly were well looked after, and I just did not imagine that some homes simply didn’t have any capacity to react to a situation like this.”

Fernando Simón, the director of Spain’s national health emergency center, on Wednesday acknowledged the cost to Spain of not having managed to protect those in nursing homes. “When the virus enters nursing homes, of course the number of dead rises a lot,” he said.

Spain’s coronavirus victims have been older, on average, than those in other countries. Over 65 percent of the Spanish dead were 80 or older, according to a data sample provided from the health ministry, compared to 50 percent in Italy as of last week, and 15 percent in China in February.

As nursing homes have come under fire, directors of some of them have accused the government of passing on the blame for its own shortcomings in a crisis that has left doctors, nurses and mortuary employees without the protective gear they need.

In Spain, thousands of health care professionals have been infected, accounting for 15 percent of the country’s total cases, the highest percentage reported by a country. And nursing home workers, like those in hospitals, are not only particularly exposed to the virus, they can also be vectors for its spread.

Jesús Rico, who co-owns a small nursing home in Madrid, said in a phone interview that the regional government had been “talking but doing almost nothing” to help homes survive the epidemic. In response to a request for emergency help, he said, his home received a parcel on Tuesday that contained only two gowns and eight face masks, which he called “shameful.”

In a statement, the Spanish Society of Geriatrics and Gerontology said that the defense minister’s comments were “counterproductive,” as they could give people “a negative and biased opinion about the real situation” in Spain’s 5,400 nursing homes, in which about 370,000 people live.

Mr. Rico acknowledged that there were problems in the industry before the virus, with inadequate health inspections and some homes that run “as a pure business, by pirates whose only goal is to spend as little money as possible.”

Across other parts of the country, regional authorities are now scrambling to evacuate homes, or take full control of them.

While some regions have been far less affected by the coronavirus than Madrid, clusters are showing up in homes for the elderly almost everywhere. In Alicante province in southeastern Spain, deaths in retirement homes have accounted for 95 percent of the coronavirus deaths.

While the plight of nursing homes has sparked recrimination between politicians and the nursing home sector, some residents are viewing the crisis more philosophically.

Reached by phone in a Madrid home where he has been for two years, Miguel Ángel Malaga Granados said that he had stopped listening to all the reports about the coronavirus, and was mostly unhappy that he was now “just kept locked up in the bedroom.”

He added: “If death comes, it had to happen some day.”

Raphael Minder reported from Madrid and Elian Peltier from Barcelona