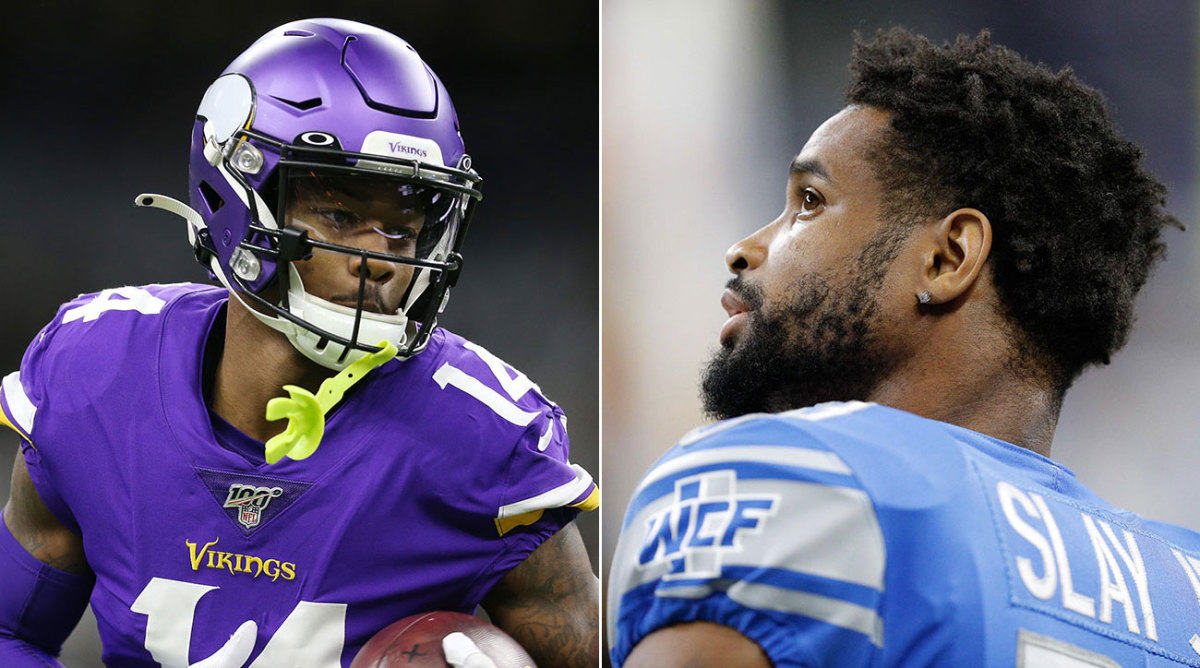 GM Ryan Pace may want to dip into this draft’s uncommonly deep wide receiver pool and jolt his offense with a dynamic target opposite Allen Robinson, but it will be hard for Pace not to address the defensive backfield with his first two picks (No. 43 and No. 50). The departures of Ha Ha Clinton-Dix and Prince Amukamara leave gaping holes at safety and right corner. And defensive coordinator Chuck Pagano’s scheme, which at its best is heavy on matchup coverage concepts as part of zone disguises and pressure designs, demands talent at these two spots. And even if the Bears believe they have quality starters in recently signed ex-Steelers corner Artie Burns and fifth-year backup safety Deon Bush (which is unlikely), both are slated for free agency in 2021 and might have to be replaced anyway.

As for that wide receiver scenario, considering that Matt Nagy’s system asks receivers to align in myriad spots, and considering that the Bears have a quality plus-sized perimeter weapon in Robinson and a fairly movable chess piece in third-year pro Anthony Miller, they can afford to take the most talented prospect regardless of his style of play. And the addition of tight end Jimmy Graham means they are not so desperate for a wide receiver that they have to reach; a two-receiver package with Graham, fellow tight end Trey Burton and scatback Tarik Cohen presents a respectable array of receiving dimension.

Top-100 Targets (Chicago owns picks 43 and 50): It’s not just that the Bears don’t have a first-round pick, but they also don’t select until 140 after they make their two second-round choices. If they stay put, they’ll have their choice of interesting if risky options for the defensive backfield. They’d likely be thrilled if Minnesota safety Antoine Winfield Jr. fell to them, as his versatility and athleticism would pair well with Eddie Jackson. LSU’s Grant Delpit could slip out of the top 40 after a shaky junior season—was his inconsistent tackling a result of playing through injury?—and while Kyle Dugger out of Lenoir-Rhyne would fit great alongside Jackson, can a team built to win now take a chance on a Division II prospect? The Day 2 corners are also interesting; LSU’s Kristian Fulton is an SEC-tested man corner who could slip, while undersized Javaris Davis of Auburn could be a scheme fit if the Bears feel he can hold up on the outside.

When Darius Slay was shipped to Philadelphia, many penciled in Ohio State’s Jeff Okudah to the Lions at pick No. 3. And that’s probably valid. No defense plays more man coverage than Detroit and for that to work, you must have three quality corners. The Lions, right now, have two: Justin Coleman (who plays the slot in nickel) and Desmond Trufant (who is a downgrade from Slay).

Up front the Lions also lost NT Damon Harrison, DT A’Shawn Robinson and EDGE Devon Kennard. However, replacements for all three exist already, with ex-Patriot Danny Shelton now at nose tackle; deceptively deft-moving 320-pounder John Atkins ready to break out; and either recently acquired ex-Patriot Jamie Collins or last year’s second-round pick, Jahlani Tavai, primed to assume the EDGE duties, which, in this system, demands that the defender take on blockers and anchor in the outer lane. And so besides maybe additional depth at corner, the Lions don’t have as many pressing defensive needs as you’d guess for a team that just went 3-12-1. Some might argue they need a pass rusher—and indeed, a lethargic pass rush was often to blame for the big plays that Detroit’s 32nd-ranked pass defense surrendered in 2019. But Patricia, like his longtime boss Bill Belichick, seems to believe that a pass rush can be manufactured as long as you have fundamentally sound players to fill a five-man rush, and corners who can hold up in man-to-man behind them. Jamie Collins and Jarrad Davis can both prosper in a highly schemed rush, as can Trey Flowers and (granted, to a lesser degree) Romeo Okwara. That’s only four pass rushers—so yes, maybe the Lions could use one more (though Patricia, much more than Belichick, is often willing to rush only three). But most likely Patricia and GM Bob Quinn will find it more pertinent to use their early-to-mid-round picks on offense.

Departed right guard Graham Glasgow needs to be replaced. At wide receiver, vertical threats Kenny Golladay and Marvin Jones are both in the final year of their contracts. Assuming Golladay is the priority, it could be difficult to re-sign Jones. Slot man Danny Amendola is also playing on a one-year deal. Last season Matthew Stafford threw deep on a greater percentage of his passes than any other QB. If the Lions want to continue this approach, they’ll need a wideout with the size and speed or stride length to consistently win downfield.

Top-100 Targets (Detroit owns picks 3, 35 and 67): Ohio State CB Jeff Okudah seems like a highly logical fit with the third pick. The 35th should present a number of solid options on the interior. Michigan’s Cesar Ruiz can play any of the interior spots, as can LSU’s Lloyd Cushenberry; Ruiz is the higher-ceiling option while Cushenberry brings the kind of football character this front office seems to prioritize. Clemson’s John Simpson has a chance to be plug-ang-play. Louisiana’s Robert Hunt, who some teams see as a tackle prospect, could be a fit as well. If they’re looking for a mid-Day 3 deep threat for the receiving corps, South Carolina’s Bryan Edwards and UCF’s Gabriel Davis would fit the bill.

None of Green Bay’s needs are urgent or dire, which is probably to be expected of a team coming off a 13-win season and NFC championship appearance. It’d be nice to find another pass-catching weapon, be it at wide receiver (the Packers could use either a speedster or big-bodied target opposite Davante Adams) or tight end to replace Jimmy Graham. But we can also believe Green Bay’s brass if they claim to like their in-house replacements here. Wide receiver Allen Lazard is a favorite of Aaron Rodgers. Jake Kumerow has shown glimpses of route running acumen, fine-tuned body control and contested catch ability. And at tight end, some scouts believe that last year’s third-round pick, Jace Sternberger, has the potential to be a high-quality flex receiving weapon.

A running back could also be in store, given that Aaron Jones and Jamaal Williams are both playing on expiring rookie deals and teams are as reluctant as ever to award second contracts at this position.

Defensively, the Packers play enough dime personnel (6 DBs, 1 LB) that linebacker cannot be considered any sort of priority position, but even after signing underrated and athletic ex-Brown Christian Kirksey it still might behoove Green Bay to find a classic run-thumper to fill the void of departed free agent B.J. Goodson. This season the Packers have seven games against teams that are capable of riding a smashmouth ground game: the Vikings (twice), Jaguars, Panthers, 49ers, Titans and Colts.

Still, a run-thumping linebacker will play no more than 30 snaps in those games and as little as five or fewer in other games. A nickel slot corner, on the other hand, is liable to get 45-50 snaps a game. Last season that role was filled by Tramon Williams, who recently turned 37 and is currently unsigned. Even if Williams is brought back later this spring or sometime this summer, Green Bay still needs to groom an heir apparent (with the understanding that said heir apparent might have to play down the stretch this season). Chandon Sullivan has gotten some reps here but is better suited to be a utility dime DB, capable of aligning at safety or linebacker. Same goes for 2018 second-rounder Josh Jackson.

Top-100 Targets (Green Bay owns picks 30, 62 and 94): They’ll have their pick of quality receivers at the end of the first round, where a gadget weapon like Colorado’s Laviska Shenault, TCU’s Jalen Reagor or Arizona State’s Brandon Aiyuk would all upgrade the offense. Clemson’s Tee Higgins and Baylor’s Denzel Mims are possibilities as well. (Or maybe they wait for Day 2 and try to recapture the old Randall Cobb magic with Kentucky QB-turned-wideout Lynn Bowden.) There will be some quality slot corners available on Day 2, including undersized Amik Robertson of Louisiana Tech, Josiah Scott of Michigan State and Javaris Davis of Auburn, or bigger, versatile options that might appeal to DC Mike Pettine, like Ohio State’s Damon Arnette and Penn State’s John Reid. That thumping linebacker could wait until Day 3. California’s Evan Weaver and Purdue’s Markus Bailey have limited ceilings but could probably contribute early in Pettine’s complex defense.

The implication of QB Kirk Cousins’s two-year contract extension is the Vikings believe their championship window is still open. But as it stands, this team has three gaping holes in its starting lineup on both sides of the ball.

Offensively, it starts at wide receiver, following the Stefon Diggs trade. In-house replacement options Olabisi Johnson and Chad Beebe can be serviceable contributors off the bench, but a veritable No. 2 target must be found. Otherwise, Adam Thielen will encounter every form of double-team coverage imaginable in 2020. The other two holes are at guard. On the right side, veteran Josh Kline was cut. On the left side, an upgrade is needed, as 2017 third-rounder Pat Elflein has struggled mentally and physically. Minnesota is fully committed to its foundational outside zone blocking scheme, so whoever the Vikings draft here must be nimble and quick.

Defensively, Xavier Rhodes’s decline and release, and Trae Waynes’s and slot man Mackensie Alexander’s defections to Cincinnati leave the Vikings without their top three corners from past years. 2018 first-round pick Mike Hughes can comfortably take one of the starting spots, and maybe—MAYBE—fellow third-year pro, undrafted man Holton Hill, can take the other. Still, the Vikings would in the very least need a third guy, and probably a fourth, if not fifth, given Mike Zimmer’s penchant for rotating at this position. Hughes’s ability to play inside or outside at least gives Minnesota some flexibility in who they take.

The last need is at defensive end, where the departures of Everson Griffen and top backup Stephen Weatherly leave a void on the right side. 2017 seventh-rounder Ifeadi Odenigbo is ready for a bigger role, but ideally that’d be as a nickel defensive tackle. Even if the Vikings are comfortable with Odenigbo outside, they need to spell him with someone more dynamic than ex-Bill Eddie Yarbrough.

Top-100 Targets (Minnesota owns picks 22, 25, 58, 89 and 105): They could certainly fill two of those needs late in the first round. Among the receivers, LSU’s Tee Higgins would give them a big catch radius target opposite Thielen, while LSU’s Justin Jefferson would provide a wily possession target who could move around the formation. But with such great depth at receiver, it might make more sense to wait until that 58th pick to address the need, when they could pick up a pro-ready option like USC’s Michael Pittman Jr. or Florida’s Van Jefferson. It isn’t a great interior O-line class, but Michigan’s Cesar Ruiz is an ideal fit in their scheme and would be worth what some would consider a minor reach in the top 25. If they go cornerback with one of those first-round picks, Utah’s Jaylon Johnson would be able to step in as an immediate starter and potential future shutdown corner, while TCU’s Jeff Gladney is undersized but ultra-competitive, likely able to play the boundary as well as the slot. Virginia’s Bryce Hall is also polished and can handle Mike Zimmer’s scheme, even if his lack of long speed is not ideal. If they wait, among the NFL-ready corners potentially available mid-Day 2 are slot guys Amik Robertson of Louisiana Tech, Auburn’s Javaris Davis and Josiah Scott of Michigan State.