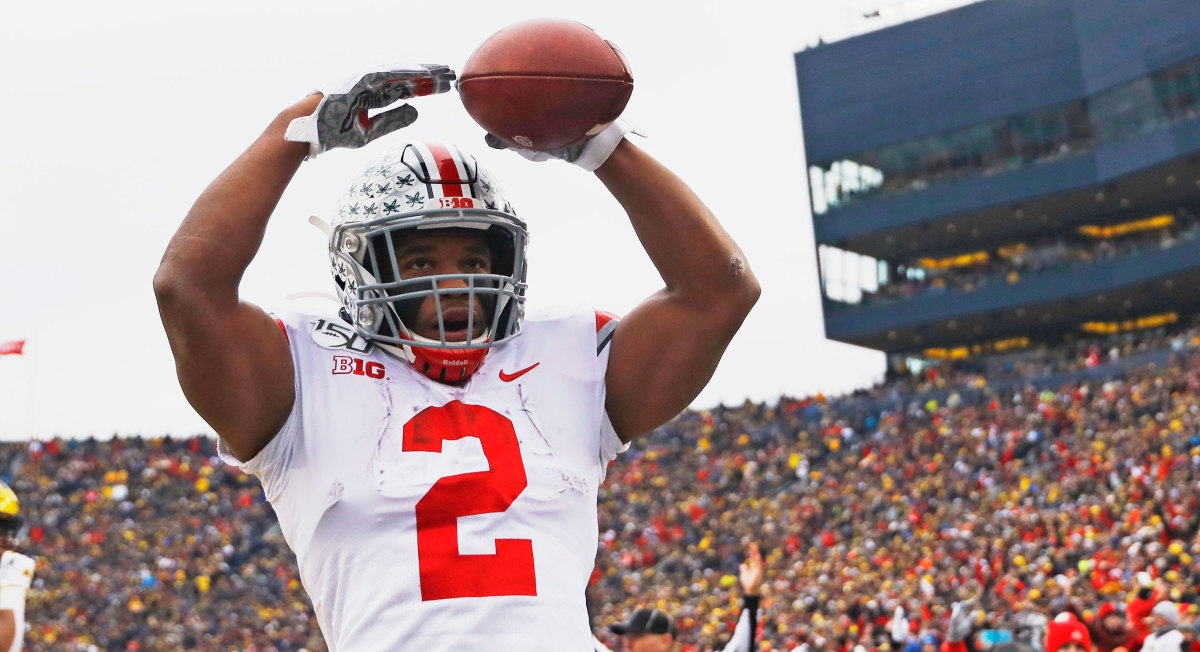 While playing in a great system at Ohio State, Dobbins looked elite in his freshman year (1,538 combined yards with eight TDs and 22 catches on 216 touches while seeing about 55 percent of the running back opportunity.

Strength is a big part of his success. Dobbins brings a fighter’s mentality to the run game. His mission is to drive the ball forward with quickness, vision, and against the grain cuts. He’ll take a hit and lose his balance, but Dobbins finds a way to stay upright on many plays while offering a stiff arm.

Taylor comes to the NFL with an edge in size (5’10” and 225 lbs.) and speed (4.39 forty yard dash). His game is built of running up the middle in tight quarters. I see a better version of Jordan Howard while needing to develop as a pass-catcher. Taylor has the vision and quickness to turn a relatively small run into a big gainer. His speed also allows him to make plays on the outside.

His one strike is his battle with fumbles in his career while showing more fight at the end of inside runs when facing early contact.

A team in need of an early-down back with scoring ability should target Taylor in this year’s draft.

As the lead rusher for Georgia over the last two seasons, Swift ran for 2,267 yards on 359 carries with 17 rushing touchdowns. He also picked up 56 catches for 513 yards and four more TDs. His season ended with only three carries for 15 yards over his final two contests.

Swift runs with vision and a feel for daylight. His top gear hurts him over the long field while needing to improve his value in short-yardage situations when faced with multiple big bodies. He earns his edge accelerating out of short chopping steps in tight quarters thanks to his ability to get to a full stride quickly. Swift projects well as a receiver, but he’ll have to prove his worth in pass projections.

I don’t view him as a workhorse lead running back at the next level until he improves his durability.

Over the first five games in 2019, Edwards-Helaire rushed for 360 yards, and five TDs on 65 carries with some success in the passing game (10/59). His stats blossomed over a four-game stretch (814 combined yards with nine touchdowns and 27 catches on 92 touches) starting in late October. Edwards-Helaire had his highlight game against Arkansas (253 combined yards with three TDs and seven catches).

He’s an undersized back (5’7” and 205 lbs.) with NFL RB par speed (4.6 forty yard dash). Edwards-Helaire needs to get stronger, which may limit his initial value in pass protection. His running style offers patience with quickness over the short areas of the field. He’ll make quick cuts to create space while having the wiggle to make defenders miss at the second level of the defense.

Edward-Helaire proved to be durable when asked to carry a heavy workload. His value in the passing game should lead to more touches in his rookie season.

The trick for an NFL team is gauging his value within their expected offense. More of a complementary player to a good offense than a running back to build a franchise around.

At this year’s combine, Akers graded well in speed (4.47 forty yard dash) and the bench press (20 reps of 225 lbs.). His short-area quickness isn’t ideal. His free-flowing style works well in space while showing the vision to add yards at the second level of the defense if given open field to make plays. Akers will break free in space with a feel for scoring in close.

He’ll make plays in the passing game, but his pass protection skills may be below par even with strength as an asset.

His path to running back came via the quarterback position, which helps his play-making ability.