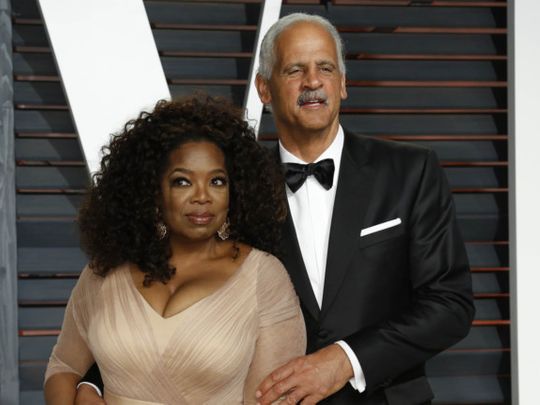 Oprah Winfrey doesn’t play when it comes to her health.

During her recent interview with Arianna Davis, digital editor of Oprah Magazine, Winfrey revealed that she had banished her longtime boyfriend Stedman Graham out of bed and into the guesthouse after he travelled out of state — but she still leaves him food at the doorstep.

“You all know I had pneumonia late last year, and you can still hear the raspiness in my throat sometimes when I talk,” said Winfrey, adding that she had just finished a course of antibiotics last week after a bronchial infection.

“Stedman was late to the party understanding. Stedman was one of those going, ‘I don’t know what everybody’s getting so upset about. It’s been all fear-based!’ And that’s why Stedman is at the guesthouse,” said Winfrey, of her boyfriend’s reaction to the coronavirus.

She went on to explain: “Stedman did not arrive from Chicago until Thursday… He’d been on planes. So, [he asked], ‘What’s the procedure for coming home?’ The procedure is you ain’t coming and sleeping in my bed.

“Have you not been paying attention to the news? Social distancing doesn’t mean you’re going to go sleep in the bed with the person when you’ve just off of American Airlines!”

“We cannot play those games,” Winfrey added. “We’re taking it very seriously. I’ll send you some video — I walk past the guesthouse [and] I leave food at the doorstep.”