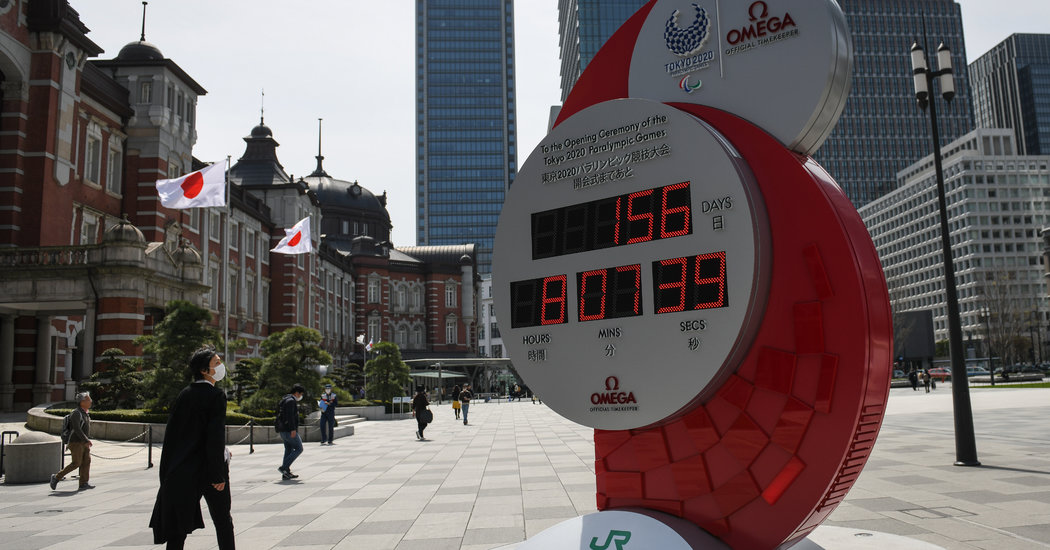 Steele Johnson, a diver who won a silver medal for the United States at the 2016 Rio Games, woke up Tuesday morning to texts from friends saying they were so sorry that the Summer Olympics had been postponed. They knew how hard it had been for Johnson, 23, and his wife, Hilary, to make ends meet as he pursued a gold medal in Tokyo.

When he read the news, Johnson said, he felt a pit in his stomach.

“We’ve had a very, very tough year financially,” he said. “I don’t know if I could keep up a lifestyle like this for another 12 to 15 months of just diving without getting a full-time job. It’s hard to think about making more sacrifices than we already have.”

For days, athletes had been voicing concerns about the 2020 Tokyo Games, worrying that they were jeopardizing their health and the health of others if they continued training while many of their countries were locked down and restricting activity.

In polls and surveys conducted over the weekend, athletes voted in overwhelming numbers in favor of a postponement.

Yet when the news finally came, it was the ultimate mixed blessing: a lifeline for some and a new set of challenges that may be insurmountable because of financial, age or health issues for others.

Like so many Olympians, Johnson, who has a degree in film and video studies from Purdue, lives on a tight budget that has no place for cuts. He and his wife don’t buy new clothes. At home in Indiana, their grocery bill must stay within $60 a week. He has worked nights as a driver for the food delivery service Grubhub. His wife is a wedding photographer.

After he won a silver medal at the Rio Games, Johnson could not secure a sponsor. He receives a small stipend for being on the national team, but now will look for work that can carry him through to the new, unspecified date for the Games in 2021.

“I’m just going to have to be creative,” he said. “I will do what I can to support my family and pay for our food and our dogs’ food, but it’s going to be a challenge.”

Greg Meehan, the Stanford women’s swimming coach and the head of the U.S. women’s team, said the postponement left talented high school seniors with a tough choice: forgo college for another year and train exclusively for the Olympics or juggle training and the stresses of freshman year.

“The timing was perfect: Go to the trials, hopefully make the Olympic team and then there’s that natural transition to college,” he said.

Meehan’s swimmers include Katie Ledecky, a five-time Olympic gold medalist who took the longer, bigger-picture view in a message she posted on Twitter after the postponement was announced: “As we stand together to meet today’s challenges, we can dream about a wonderful Olympics in a beautiful country. Now is the time to support all those working to heal the sick and keep us all healthy.”

Ledecky, 23, put off her senior year of college to focus on the Tokyo Games, and Meehan still doesn’t expect her back in the classroom until after the Olympics.

For Laurie Hernandez, a gymnast training in Costa Mesa, Calif., the postponement was exactly what she needed.

She took two years off after winning a team gold medal and a bronze in the balance beam at the Rio Games, working in entertainment. She competed on “Dancing With the Stars” — and won it — and also hosted “American Ninja Warriors Junior.”

When she embarked on a comeback to the national team late last year, many people in the sport said it was too late. Before her gym was closed Thursday because of a statewide lockdown, she had been going there six days a week, at least five hours a day, training and rushing to fine-tune routines. She was doing everything and anything that could give her the best chance at making the Olympic team this summer.

For other athletes, a postponement fit with what the doctor ordered.

Kathleen Baker, 23, who won a gold and silver medal in swimming at the Rio Olympics, has Crohn’s disease, an autoimmune disorder that makes her especially vulnerable to the novel coronavirus.

Training lately had descended into a search for open pools in San Diego, where she lives. “It’s been everyone fending for themselves, so it is not what the Olympics are all about,” Baker said recently.

Sandi Morris, a pole-vaulter who won a silver medal in the 2016 Games, lost access to her regular training facility, and thus her finely tuned routine, when the University of Arkansas closed its doors this month in Fayetteville.

This weekend, Morris — along with her two dogs and two birds — had planned to drive from Arkansas to Greenville, S.C., where she will rent a house near where her parents live to carry out a makeshift training plan at a pole-vaulting pit her father is building at a neighborhood soccer field.

Morris said she was concerned how she would support herself through the pandemic and the postponement, with no opportunities for appearance fees and prize money on the horizon.

Sheryl Shade, a longtime agent for Olympians and Olympic hopefuls, said her winter athletes began calling her after the postponement was announced, worried that their sponsorship dollars were at stake.

“I told them they had to get in line,” Shade said. “Everybody’s concerned about the funding and the sponsors, who were pretty much finished with their campaigns that they are shipping to Japan. Now those sponsors might have to change them. Will there be enough money for everybody? It’s too early to tell.”

For Allison Schmitt, a swimmer who was pursuing her fourth Olympic berth, the postponement of the Tokyo Games is the second deferment she has faced in a year. Schmitt, 29, already put on hold her pursuit of a master’s degree in social work at Arizona State after she spent the 2019 spring semester completing the first of her required counseling internships, an emotionally and physically draining experience that she blames in part for a poor showing in last summer’s world championships in South Korea.

Tuesday’s announcement left Schmitt in a quandary. Does she pause her final year of school for 12 more months? Try to juggle the pursuit of her degree and another Olympic berth? Or does she get on with her life and leave her swimming aspirations somewhat unfulfilled?

“The problem is, can we stretch this another year?” her coach, Bob Bowman, said. “I mean, I can. But I’m not sure she can.”