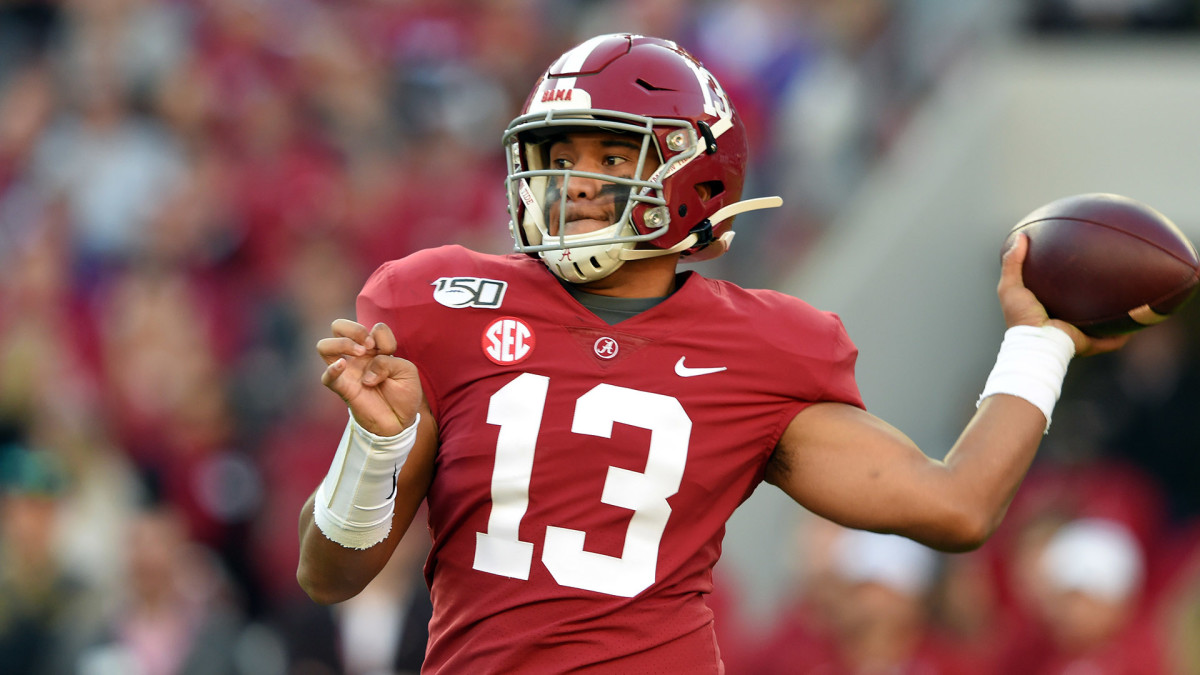 Before the 2019 college football season, Alabama QB Tua Tagovailoa was widely projected to be the first overall pick during the 2020 NFL Draft. That changed after Tagovailoa suffered a season-ending hip injury during Week 9 action. Joe Burrow from the LSU Tigers is now a runaway favorite for the first overall selection.

After staying out of the QB free agent frenzy, teams like the Bengals, Dolphins, and Chargers will be shopping for a franchise quarterback. Cincinnati is a near-lock to select Burrow first overall. That leaves Tagovailoa and Justin Herbert as the next top QB prospects, and they will be taken early on Day 1 of the draft.

Not able to meet teams in person, Tagovailoa took to social media and posted a video of a private workout on March 23. He looks sharp dropping back and cutting during a long pass drill. Bookmakers at BetOnline have posted odds on when Tagovailoa will be taken when the draft begins on April 23 in Las Vegas.

Tagovailoa being selected third is the favorite on this draft prop. Detroit currently owns the third pick, and the health of Matthew Stafford is a concern. If healthy, Stafford is locked in as the Lions starter this season, so Tagovailoa doesn’t need to be rushed into the starting role. That would give him extra time to recover from his hip injury and mentor under Stafford. This option is the best bet if Detroit and Miami trade picks.

Miami has been one of the most talked-about landing spots for Tagovailoa. The Dolphins own the fifth pick, and “Tank for Tua” was a popular battle cry in South Beach last season. Miami had a one-on-one meeting with Tagovailoa during the NFL combine and was actively scouting him before his injury. Projecting the order doesn’t change, plus the Lions and Giants address more pressing needs; fifth overall takes over as the best bet.

Washington is slated to pick second, and it’s doubtful they will take Tagovailoa. The Redskins selected QB Dwayne Haskins with the 15th pick last year and just added QB Kyle Allen from Carolina as a backup. Plus, new head coach Ron Rivera is a defensive guru. Ohio State DE Chase Young is a generational talent he won’t want to pass on. Second overall becomes a top option if Washington trades the second pick to Miami.

Odds increase substantially after the top three favorites, and Tagovailoa is a longshot to be selected sixth overall. Los Angeles holds the sixth pick, and the Chargers are without a franchise quarterback for the first time since 2006. Coach Anthony Lynn expressed confidence in Tyrod Taylor as the Chargers starter, but he isn’t a long-term solution. Tagovailoa isn’t expected to fall out of the top five, so it’s best to ignore this option.

New York has the fourth overall pick, but quarterback is not a pressing need for the Giants. David Jones was selected fifth overall last year, and he posted decent numbers during his rookie season. If New York maintains its pick position, the Giants have greater needs on the offensive line and defense. Los Angeles may try to acquire the fourth pick from New York, but the Chargers seem more interested in Oregon QB Justin Herbert.

It’s difficult to imagine a scenario where Tagovailoa falls out of the top six. Health could be a factor as the NFL has canceled all scheduled pro-days. That means teams may not have a chance to meet face-to-face with players prior to the draft. If clubs can’t bring Tagovailoa in for a physical and drills that could affect his draft stock. Tagovailoa being selected first part of the Field bet option, but that is very unlikely to happen.

The draft order will change before and during the draft. Not knowing the exact order complicates the betting research process. Also, Tagovailoa is still in the early stage of his injury rehab. As such, it may be wise to wait for added clarity prior to placing a wager. Four weeks ahead of the draft, Tagovailoa being selected fifth overall stands out as the best bet on this NFL Draft prop.