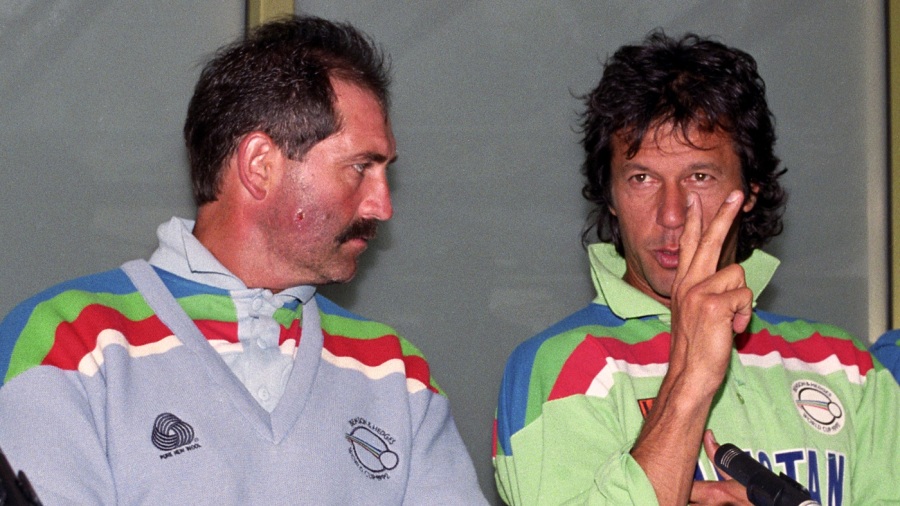 Welcome to #RetroLive, ESPNcricinfo’s answer to the ongoing global sporting outage. Over the coming weeks and months, we will be dredging through the archives to relive classic matches via our unrivalled ball-by-ball commentary. And when better to start than this coming Wednesday, March 25, the anniversary of the England v Pakistan 1992 World Cup final? If you don’t want to know the score, look away now…

After 38 matches and 32 days, it all comes down to this, at the ‘G. England v Pakistan in the World Cup final, in front of a crowd that is expected to push 90,000. At some stage on Wednesday evening, Graham Gooch or Imran Khan – two of the most senior statesmen in the world game – will hoist the Benson & Hedges crystal-globe trophy to confirm the new first-time world champions. What a tantalising prospect we have in store.

If, after the spectacle we’ve been witnessing for the past month, pyjama cricket still isn’t quite your thing, then fear not, the two teams will be back in whites soon enough, locked in a five-match Test series during the English summer – one that is sure to have an extra piquancy given how much will have been won and lost in the coming hours.

But, even for die-hard traditionalists, it would be hard to dispute that cricket’s World Cup has come of age during its maiden staging in Australia and New Zealand. A festival of the sport that began, almost as an afterthought, in England in 1975 and was rattled off in a fortnight, has now grown to become a powerhouse competition in its own right.

And in the country where floodlit cricket was pioneered, 15 long years ago, by Kerry Packer and World Series Cricket, the concept has stepped up another level this month – the coloured clothing, white balls and black sightscreens providing a sneak peek into the sport’s future as a 21st century spectacle. And thankfully, the cricket, by and large (and give or take the odd rain rule), has lived up to its heightened billing.

Even in what proved to be a subdued and ultimately futile campaign, the hosts and holders, Australia, played a massive part in ramping up the excitement. After crashing to chastening losses to their Southern Hemisphere rivals – New Zealand in the opening match and South Africa in their thrilling return to the sporting big-time – the Australians’ tooth-and-nail battle to save their skins was compelling. But an agonising one-run win over India gave way to one final Botham-ing against England, and after that, they were always playing catch-up.

And so we are down to two. And while it’s customary to quibble about the exact identity of a tournament’s finalists, no two teams epitomise the spectacle of the 1992 World Cup better than England, the early tournament pace-setters, and Pakistan, the late-charging thoroughbreds, whose respective campaigns have utilised all the permutations that the tournament’s excellent round-robin format was designed to make possible.

Gooch’s men hit the ground running with five wins and a hugely significant no-result (more of that in a moment) in their first six matches, but they’ll need to blank out the slight nagging suspicion that they have peaked a week or two early. With qualification to the last four already secure, a distracted pair of defeats against Zimbabwe and New Zealand dented their aura a touch, and while they still have enviable depth in their batting and bowling stocks, injuries and fatigue after a long winter are encroaching.

Mind you, if ever there was an occasion to dredge one’s last ounces of energy, this is it. And while some of the squad, notably Robin Smith and Chris Lewis, are young and talented enough to lead the line in Asia in four years’ time, for several old warhorses – Gooch, Ian Botham, Allan Lamb, Derek Pringle – there can be no more tomorrows. Each of them has been in a losing World Cup final dressing room before – in Gooch’s case, twice – and each knows how long the regret can linger.

Pakistan, by contrast, have had to grift and graft their way back into contention after looking for all the world as though their tournament was over following three losses in their first five. But, led imperiously by Imran, who would probably back himself to unite the subcontinent given half a chance, Pakistan then thumped Australia in a massively significant showdown in Perth, and have scarcely looked back. Breezy victories followed over Sri Lanka, again at the WACA, and the table-topping New Zealand in Christchurch, and few could argue that they have hit their stride at precisely the right time.

Unlike England, who boast an extraordinarily balanced XI in which every player has a first-class century to his name, Pakistan have got where they need to be with bursts of timely inspiration rather than any sort of coherent plan. And let’s not forget either their burst of divine intervention in Adelaide, when against these same opponents, Pakistan were routed for 74, only for rain to sweep to their rescue with elimination staring them in the face. The point they salvaged there proved just enough to vault them into the last four, and now here we are. Maybe Allah will be smiling on them after all …

Back on the field, Wasim Akram‘s travails with the new ball have epitomised Pakistan’s yin-and-yang campaign – in a tournament for swing bowlers, he’s got the ball to talk too much on occasion up front. But hand him an ageing Kookaburra and watch the mastery take root. With his fellow king of reverse swing Waqar Younis missing the tournament with a stress fracture of the back, he’s got the stage and the talent to bid for immortality.

Whatever transpires at a packed MCG, it’s been a month to remember. The emotional return of South Africa, and their every-bit-as-emotional departure; the home-spun endeavour of New Zealand, raised to the brink of glory by Martin Crowe’s class with the bat but foiled in the final analysis by his cruel hamstring tear, allied to Pakistan’s soaring faith in youth. And the galvanisation of Gooch’s one-day wonders – a team whose sky-blue shirts will surely retain a special place in their fan’s affections, whatever transpires on the day. But, for God’s sake, let’s hope it doesn’t rain …

With his high-born lineage, Imran was bound to evoke the majesty of the tiger in rallying his cornered team, but Javed Miandad, Karachi’s natural-born streetfighter, has probably had something more down and dirty in mind while leading the charge in his inimitably pugnacious fashion. While Pakistan as a whole have had a rollercoaster ride to the final, Miandad himself has been a pillar of indomitability at No. 4, with four half-centuries to date and only one score below 30 (albeit that came against England in that infamous escape in Adelaide). And whether he’s been aping Kiran More’s incessant appealing behind the stumps or anchoring the semi-final chase to allow Inzamam-ul-Haq to cut loose at the other end, his ubiquitous presence has been tournament-long proof that you can never write Pakistan off.

For a man who is indisputably England’s greatest all-round cricketer, Ian Botham has long had a curiously underwhelming one-day record – at least until this, his farewell to the true glory days. Prior to his belated arrival in New Zealand (after completing his stint as the king in Jack and the Beanstalk), Beefy had amassed 1738 runs at 22.35 and 122 wickets at 29.14 in 99 ODIs – steady but far from swashbuckling. Since then, however, he’s turned on the bravado, compiling a career-best 79 in Christchurch before mocking the Australians on their home patch in Sydney with his best ODI figures of 4 for 31, not to mention another buccaneering fifty. He goes into the final as England’s leading wicket-taker for the tournament with 15 wickets at 17.60, and with a licence to have a go in his pinch-hitting role alongside Gooch at the top of the order. And if Botham’s sense of occasion is anything to go by, we can expect another concerted bid to steal the show.

England wait anxiously on the fitness of two key players, Smith, who trapped a nerve while practising before the semi-final, and Pringle, who missed the South Africa semi-final with an intercostal injury. Pringle, in particular, has been an immense factor in England’s canny use of the two new balls, finding teasing swing allied to impeccable line and length to deny any opposition batsmen any liberties, and though Gladstone Small is an able deputy, his absence would be a huge blow. Smith, meanwhile, will surely find a way back into the starting XI, either in place of Lamb, who’s yet to make a big contribution in his three games, or – perhaps more likely, given Lamb’s big-match experience and their wealth of allrounders – Dermot Reeve, whose sparky cameo in Sydney doesn’t quite justify his retention, though his medium-pacers are a useful go-to option.

The spectacular coming-of-age of the new boy wonder Inzamam in the semi-final has justified one of the key decisions Pakistan took to arrest their free-falling form in the early part of the tournament – namely the promotion of Imran himself to No. 3, to provide a sheet-anchor in the event of early wickets, and a foil for the in-form Miandad. It’s a gamble to rely on an explosive finish to your innings in an ODI, but at least it’s a plan, and with the likes of Saleem Malik and Ijaz Ahmed (a likely recall in place of the second legspinner) still to produce telling displays in this tournament, Pakistan know they have untapped resources to call upon. With the ball, so much rests on their three key spearheads – Akram, Aaqib Javed and Mushtaq Ahmed. After that, it’s Imran living on fading glories, and not a lot else.

There’s a threat of rain in the air in Melbourne, and given everything we have learnt about the rules for adjusted targets in this tournament, it’s hard to see how either captain could risk bowling first if they won the toss. But the pitch looks very true, and will surely hold up across 100 overs, even under lights, when the threat of dew could add a further jeopardy for the chasing team.

“I want my team to play today like a cornered tiger, you know when it’s at its most dangerous.”

Imran Khan first issued that rallying cry ahead of their critical group-stage win over Australia at the WACA. But it worked then, so it’s hard to see him changing his T-shirt in a hurry.

“Paraded in, sat down – really don’t want to be there. Got my mind a million miles away.”

Ian Botham is less than amused after walking out of an eve-of-World-Cup-final dinner as a comedian takes the mickey out of the Queen.