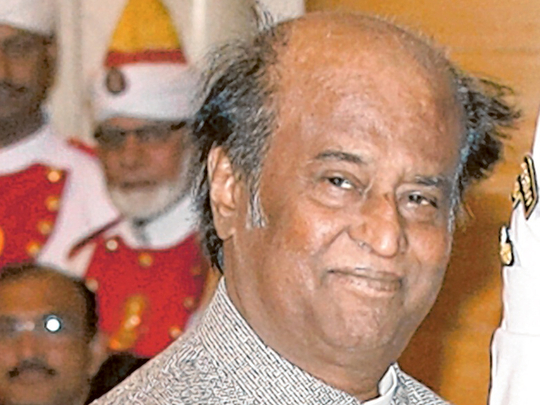 Indian superstar Rajinikanth, who’s notoriously media shy and averse to interviews, let his guard down with TV host Bear Grylls during his television debut in the special episode of ‘Into The Wild With Bear Grylls’ on March 23, which aired on Discovery channel in India.

From showing Grylls on how to imitate his trademark flipping-of-sunglasses gimmick to bringing attention to an impending water crisis, the soft-spoken matinee idol revealed several streaks of his personality that are rarely on display.

In January this year, top survivalist Grylls shot this episode with Rajinikanth, 69, in the Bandipur National Reserve in Karnataka in an effort to bring the “real person behind the icon”.

Going by the teasers that has caught on like wildfire on social media, the two got along like a house on fire. While Grylls was floored by the actor’s humility and endearing personality, Rajinikanth dubbed his television debut as a life-altering experience.

“One of the most adventurous experiences of my life !! Hope you all enjoy watching this show as much as I did being on it !!!#IntoTheWildWithBearGrylls @BearGrylls thank you so much my friend @DiscoveryIN,” tweeted Rajinikanth prior to his television debut.

Rajinikanth is the second Indian public figure after Indian Prime Minister Narendra Modi to have appeared in the top survivalist show which has featured leaders like Barack Obama and pop idols like Nick Jonas.

Reports that Rajinikanth — who’s infallible on screen in his string of all-conquering heroic saviour roles — got injured during the filming in the untamed forest area was immediately squashed and debunked by the actor’s team who underplayed the alleged incident by claiming that Rajinikanth, fondly called as Thalaivar, was just bruised from thorns, they hastily said.

“This is the craziest day of my life,” declares Rajinikanth at the end of the show.

Here’s what went down …

Rajinikanth believes water crisis is one of the biggest problems plaguing the world.

“The complete point is that, he who rules the water, rules the world … The current situation is heart wrenching. In the world there are 2.1 billion people suffering due to water scarcity. So water is our biggest problem,” said Rajinkanth during the show.

“All of us have that one person who completely changes your life, when you don’t even realise it. That was KB for me,” said Rajinikanth on his mentor director K Balachander who discovered him.

“Our greatest virtue is that four religions —Hinduism, Christianity, Buddhism and Islam — are all accepted in here and we live as brothers. This is the greatest virtue of our country. I’m proud of my country.”

Rajinikanth on his superstardom:

“I don’t think about my fame a lot. Once acting is finished, I forget about being Rajininkath … Money and fame is of no use, if you don’t have good values.”

Actor-politician Kamal Haasan also makes a fleeting cameo in the episode along with Bollywood actor Akshay Kumar who wishes Rajinikanth luck for his journey into the wild with Grylls.