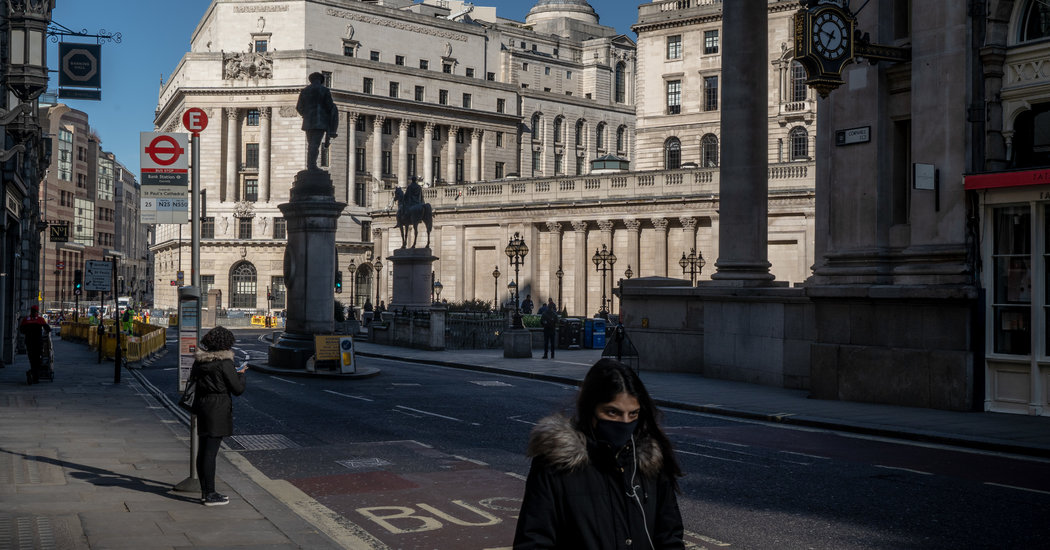 We’re covering Britain’s nationwide lockdown, the eerie beauty of empty sites and an astronaut’s tips for dealing with isolation.

Prime Minister Boris Johnson, who has faced a storm of criticism for his laissez-faire approach to the coronavirus pandemic, on Monday placed Britain under virtual lockdown by closing all nonessential shops, banning meetings of more than two individuals and requiring people to mostly stay home.

Those steps bring Britain into alignment with measures across Europe, including in France, where an existing nationwide lockdown will be strengthened as of today.

The drastic measures are an effort to avoid forcing doctors in overwhelmed hospitals to have to turn away patients — as they are already doing in northern Italy.

What to know: The Times is providing free access to much of our coronavirus coverage, and our Coronavirus Briefing newsletter — like all of our newsletters — is free. Please consider supporting our journalism with a subscription.

Relief at your government’s whim

The pandemic has not spared the rich or famous from infection, but working-class people are bearing a disproportionate share of the economic pain.

How much depends on where they live. That disparity reflects not only the world’s differing safety nets, but also what governments are doing right now to stem the crisis.

Denmark, for example, has promised to cover 75 percent to 90 percent of salaries if businesses do not lay off their employees — an effort to avoid paying for the disruptions caused by mass unemployment. Britain and South Korea, among other countries, are taking a similar line.

But in the U.S., where health care is not guaranteed, many workers could be left far more vulnerable — even if Congress eventually passes a proposed $2 trillion relief bill.

Quotable: “I don’t know what I’m going to do,” said Jose Luis Candia, a father of three who lost his two jobs busing tables at high-end Manhattan restaurants. “Oh my God.”

Related: The crisis has exposed the economic fragility of ride-hailing drivers, food delivery couriers and other gig economy workers in Europe and the U.S.

The upside of emptiness

The Times sent dozens of photographers to now-empty fairgrounds, railway stations and other sites around the world.

Their images capture the sort of dystopian beauty that is divorced from normal life and recalls the experience of “bygone explorers coming upon the remains of a lost civilization,” as our architecture critic puts it.

But by listening to experts and keeping our distance from one another, he adds, “we have not yet lost the capacity to come together for the common good.” In that sense, these empty scenes “remind us that beauty requires human interaction.”

As the coronavirus claims thousands of lives, some in the United States want to rush potential cures to market, even if it means bypassing legal checks and balances.

But those rules are there for a reason. Case in point: About 10,000 babies in Germany, Britain, Australia and elsewhere were born with severe defects in the 1950s and 1960s after their mothers took thalidomide, a sedative that had been approved by German regulators without testing in pregnant women.

The drug was never approved in the U.S., and the crisis over its impacts led to passage of laws requiring rigorous clinical trials for proposed medications. Our Science desk has the story of thalidomide’s unseen American survivors. (Above, baby pictures of one of them, Carolyn Sampson.)

Alex Salmond: The former first minister of Scotland was acquitted of sexual offenses that had involved accusations from nine women and included one count of attempted rape.

Afghanistan: The U.S. State Department said it was cutting $1 billion in aid to the country this year, after Secretary of State Mike Pompeo failed in Kabul to persuade rival Afghan leaders — who both claim to be the legitimate president — to support a unified government.

Disney Plus: The newish streaming service arrives in a handful of Western European countries today.

Cook: St. Louis gooey butter cake. It’s a good time to make recipes your own — after all, they’re “just sheet music,” says our Food editor Sam Sifton. “You can play them in all sorts of ways.”

Watch: The HBO documentary “After Truth” argues that while “fake news” is abetted by modern technology, it’s rooted in opportunism and cynicism.

Read: In “Hitler’s First Hundred Days,” the historian Peter Fritzsche shows how Hitler and his conservative allies crushed what remained of the Weimar Republic, in part by censoring the press and suspending civil liberties.

Smarter Living: To stay healthy during quarantine or isolation, follow a schedule and go outside if you can (but leave at least six feet between you and others). Those are among the tips that Scott Kelly, a retired NASA astronaut, shared in a Times Op-Ed.

Mike Baker, our correspondent in Seattle, has been reporting on the coronavirus outbreak for several weeks. He’s covered an outbreak at a nursing home, and the dozens of deaths at a hospital in Kirkland, Wash. Our Times Insider team spoke with him about what it’s been like.

What is an average day like for you right now?

I usually have been getting up between 6 and 6:30 and getting up to speed on what’s happening on the East Coast and in other parts of the world. I’ve spent a lot of time in the morning getting in touch with various state, local and federal officials.

Right now, we’re entering this phase where most of the containment strategies are largely in place and we’re waiting for what kind of wave of cases hits the health care system.

How do you cover that?

Just last week, I got a chance to go inside the hospital system where they had the most cases of patients die of the coronavirus in the country, and the staff members there were willing to talk with me.

What did it feel like to be in that hospital?

It’s really hard to overstate how heartbreaking it is to follow these families and stories.

On the other hand, you have just incredible stories about the doctors and nurses who are on the front lines. A lot of them were exposed and sent into quarantine, and then brought back because there was such a shortage of staff. Now they’re reusing equipment to the point where they have to wipe down their face shields with bleach wipes and their shields are foggy.

P.S.
• We’re listening to “The Daily.” Our latest episode is about the coronavirus pandemic and the Democratic presidential primary.
• Here’s today’s Mini Crossword puzzle, and a clue: Utter nonsense (five letters). You can find all our puzzles here.
• The publishers of The New York Times, The Wall Street Journal and The Washington Post called on China today to reverse its decision to bar the publications’ American journalists from working in the country.