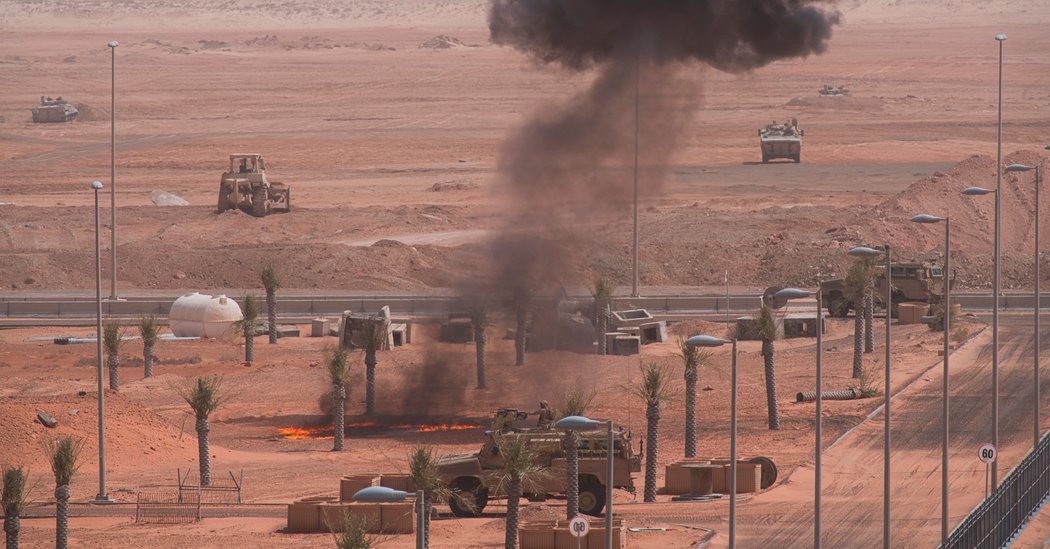 Troops raced over the dunes of the Al-Hamra Military Base to take the model city, complete with multistory buildings, an airport control tower, an oil refinery and a central mosque. Controlled explosions rang out as Emirati troops rappelled from hovering helicopters and Marines searched narrow streets on the Persian Gulf for “enemy” forces.

The biennial exercise, called Native Fury, shows the close ties between American forces and the U.A.E., a federation of seven sheikhdoms on the Arabian Peninsula home to Abu Dhabi, the capital, and Dubai, its financial heart.

It also comes after the U.S. killed Iran’s most prominent general in a drone strike in January, and Tehran retaliated with a ballistic missile attack on American forces in Iraq. While acknowledging the tensions, U.S. officials dismissed the idea of Tehran viewing such an exercise with suspicion, only some 300 kilometers (185 miles) from its shores.

“Provocative? I don’t know,” said Brig. Gen. Thomas Savage of the 1st Marine Expeditionary Force, the ranking U.S. commander at the event. “We’re about stability in the region. So if they view it as provocative, well, that’s up to them. This is just a normal training exercise for us.”

The exercise saw 4,000 U.S. troops from the Army, Marines and Navy position armored vehicles and other equipment from Kuwait and the island of Diego Garcia in Al-Hamra using a portable pier system. The barren desert, some 200 kilometers (125 miles) southwest of Abu Dhabi, is home to the U.A.E.’s vast oil reserves as well as its new Barakah nuclear power plant.

The combined U.S. forces and the Emirati troops then stormed the imaginary city of Al-Hamra, whose blocks of stand-alone houses, hotels and apartment complexes include an unfinished gas station with a sign for the fast-food chicken restaurant Popeyes on it.

While the gunplay included mostly blanks, the practice remains deadly serious for the U.A.E., which has spent billions on its military — including the Blackhawk and Chinook helicopters that circled overhead, the armored carriers that splashed into the city’s canals and the facility itself.

That military push has included taking part in the long-running Saudi-led war in Yemen, which has seen sexual abuse at a U.A.E.-controlled prison and the Emirates paying off members of Al Qaeda’s local branch there. The U.A.E. since has pulled its troops out of Yemen, calling for a political settlement to end a conflict between the Iranian-backed Houthi rebels there and its Saudi-backed, internationally recognized government.

Emirati military officials at the base in Al-Hamra on Monday declined to speak to Associated Press journalists. U.S. Ambassador John Rakolta Jr., on hand for the event, praised the U.A.E.

“Partnerships are based on many aspects, many fundamentals, and this happens just one of them,” he said when asked about Yemen. “Trust is a huge, huge factor. Transparency, common values all work into a partnership.”

Rakolta also described the exercise as “defensive in nature” when asked about Iran.

“I don’t believe that they’re intended to demonstrate a provocative act to the Iranians to say we’re coming,” he said. “Rather, we’re protecting ourselves and we want to sit down at the conference table and negotiate a lasting peace settlement.”

There was no immediate reaction in Iranian state media to the exercise. Iran’s mission to the United Nations did not immediately respond to a request for comment.

Also a concern is the ongoing outbreak of the new coronavirus. Rakolta said no U.S. diplomat in the U.A.E. had contracted the virus. Savage said those U.S. forces involved had had little contact with the outside world after shipping out for the event and none had tested positive since. However, he said the military remained vigilant in terms of sanitation while living at the desert base.

“This has been an incredible training opportunity for us to go through this and practice how we would do something if, God forbid, we are forced to go fight in this region again,” Savage said.