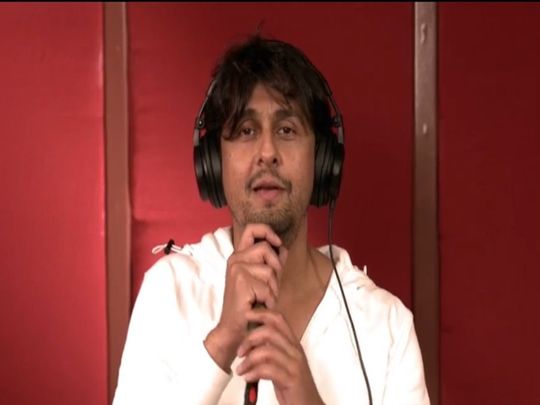 “When I die, I would like to be remembered for my song ‘Kal Ho Na Ho’ [If there’s no tomorrow],” said Sonu Nigam in his first virtual concert held in Dubai as a nod to his fans who were supporting Indian Prime Minister Narendra Modi’s Janata Curfew on March 22.

The Bollywood singer’s declaration during the coronavirus pandemic may seem morbid, but his brilliant voice sliced through any negativity and made us feel strangely alive. In times of social distancing, he kept the music alive.

There was something extraordinary about watching one of the finest Bollywood singers belt out hits — old and new — in the privacy of our living room, even as it rained heavily outside.

His hour-long virtual concert, that was broadcast online from a studio in Dubai, began on time at 6.30pm on Sunday evening and bucked the trend of Bollywood events being soul-crushingly tardy.

Though online concerts can never compete with a real-time experience of watching a singer perform with a full-fledged orchestra, Nigam’s online concert proved to be an intimate, personal experience.

The part in which he invited his young son Nivaan to sing ‘A Whole New World’ was a tad indulgent, but it gave you a chance to see Nigam as a doting dad who can be myopic when it comes to family.

His choice of songs were perfect as he opened his set with an homage to legendary singers like Kishore Kumar, Mukesh and Lata Mangeshkar. He opened the concert with the stirring medley of vintage Hindi songs.

“I hope you guys are clapping a bit on our songs from your homes… My father is watching from his home in India and I hope my mother is watching me from heavens above,” said Nigam as he sang his idol Mohammad Rafi’s song.

The second half of the hour was dominated by Nigam’s own hits and the time just flew by.

It was surreal to watch Nigam perform live virtually, but the experience wasn’t as overwhelming as watching a concert. But it was heartening to see Nigam roll with the times where self-distancing and isolation are the order of the times. Even in this imperfect setting of global health concerns, Nigam rolled out a perfect sixty minutes of musical nirvana, which was like a balm to all those frustrated souls cooped up inside their homes.