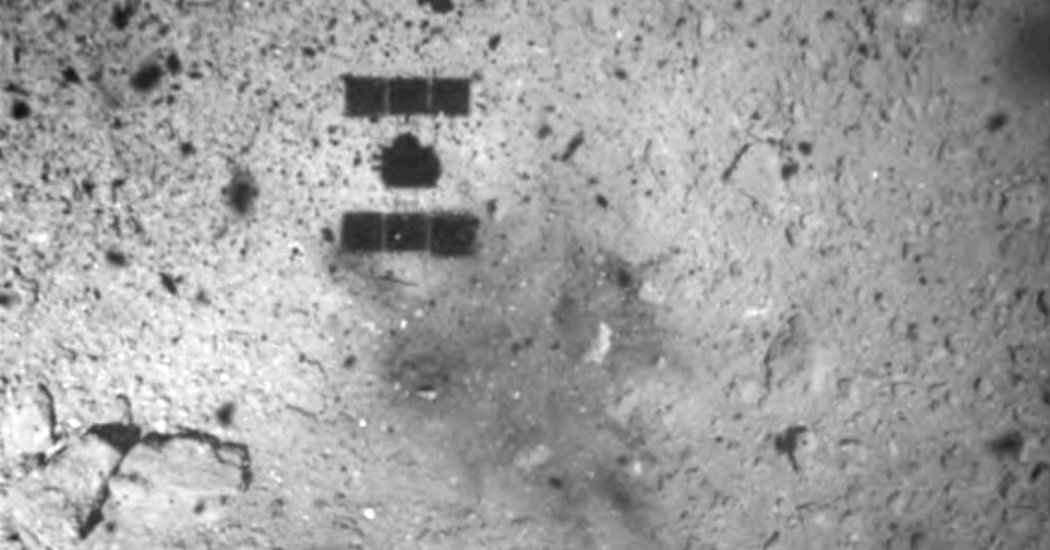 In April last year, a Japanese spacecraft launched a strike from above on an asteroid.

Japan’s space agency was not declaring war. The bombardment was part of the work of Hayabusa2, a robotic space probe that is gathering hints about the origins of the solar system by studying the rocky object, Ryugu. It is a type of asteroid that is full of carbon molecules known as organics, including possibly amino acids, the building blocks of proteins.

The mission also provides information that could help defend our planet in the future. Ryugu, a diamond-shaped body more than half a mile wide, is among the asteroids that swing inside the orbit of Earth as they travel around the sun. Ryugu itself is not expected to collide with our planet anytime soon, but other similar asteroids might.

In the April experiment, the spacecraft released an apparatus, the Small Carry-on Impactor, and scurried to a safe location behind the asteroid. Plastic explosives accelerated a four-pound copper projectile to 4,500 miles per hour into its surface. A camera deployed by Hayabusa2 recorded the impact.

Three weeks later, Hayabusa2 returned to take a look at the scar, discovering it was larger than the scientists had expected.

“That was wow, what a big surprise,” said Seiji Sugita, a planetary scientist at the University of Tokyo and one of the authors of a paper describing the results of the cratering experiment that was published on Thursday by the journal Science. From the size of the pockmark they made, scientists infer that the asteroid Ryugu looks extremely young for its age.

Dr. Sugita thinks that Ryugu is somewhat older than that. The expected age of asteroids the size of Ryugu is about 100 million years, he said. Some event that occurred nine million years ago, like a speeding up of the asteroid’s spin, could have erased and filled in the older craters. (Think of it like Botox for the solar system.)

Ryugu does appear to have been spinning much faster at that time, which would explain the bulge around its Equator. Hayabusa2 has also spotted landslides on the surface, which could have occurred as the asteroid later slowed back down.

Here is how the scientists analyzed the crater.

The hole excavated by the blast was a semicircle, not a full circle. That indicates that a large buried boulder deflected part of the impact’s energy.

The scientists had predicted a hole would be up to 30 feet wide. Instead, the diameter of the crater was close to 60 feet, with a depth of a couple of yards.

“The volume of the ejecta is about 10,000 hand buckets of worth of sand and pebbles,” Dr. Sugita said.

If the impactor had hit rock, it would have carved a small crater; the energy would have dissipated into breaking apart the rock. But when it slammed into material that was loosely held together, the impactor kicked up far more debris. (Think of the difference between dropping a cannonball on a concrete sidewalk versus a beach.)

Ryugu is covered with boulders, and indeed, one large buried rock led to the semicircle shape of the crater. But the neighboring material seems to be held in place just by the asteroid’s weak gravity. Comparing the size of the crater with the results of laboratory experiments on Earth, scientists concluded that much of Ryugu was made of bits like coarse sand grains.

The large crater size on Ryugu shifted the estimated age of the asteroid’s surface. Smaller collisions occur more often, so the pattern of pockmarks on Ryugu could have been produced in just nine million years.

Results from a small German-French lander that Hayabusa2 had dropped onto Ryugu’s surface months earlier also fit the picture of an asteroid only loosely held together. In a paper published last week in the journal Nature, the researchers working on the lander describe infrared images taken on the surface, which show that the asteroid is made almost entirely of highly porous material — fragments from a larger asteroid that was shattered by impacts.

The fragile structure of the asteroid also helps explain why so few carbonaceous meteorites are found on Earth’s surface, even though three-quarters of asteroids, including Ryugu, fall in this category: They largely disintegrate and burn up in the atmosphere before reaching the ground.

Hayabusa2, which arrived at Ryugu in June 2018, also picked up some dirt and small pebbles from the surface of the asteroid, which is named after Ryugu-jo, or dragon’s palace — a magical undersea lair in a Japanese folk tale.

After nearly a year and a half of exploration, Hayabusa2 headed back toward Earth last November. Near the end of this year, it will drop off a canister containing the samples, which will land in an empty part of Australia. Scientists will then be able to examine the composition of Ryugu in much more detail.

A NASA mission, OSIRIS-REx, is exploring another carbon-rich asteroid, Bennu, and it, too, will attempt to collect bits of it to bring back to Earth, although it will not return with its samples until September 2023.