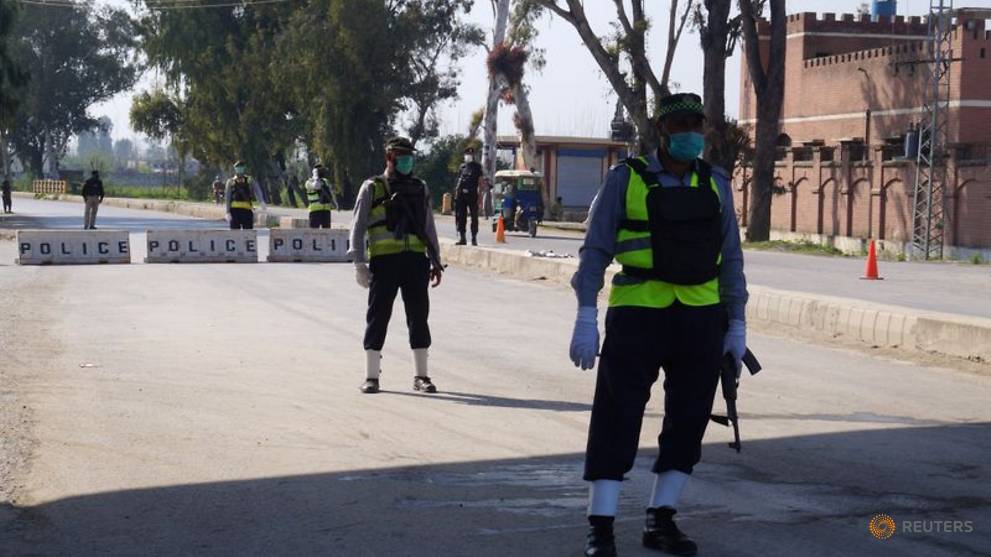 PESHAWAR: When Saadat Khan, 50, returned to Pakistan on Mar 9 from a pilgrimage to Saudi Arabia, he was greeted in his village with a rousing welcome and a grand feast attended by more than 2,000 people, many of whom embraced him warmly.

On Mar 18, less than 10 days later, Khan died at an isolation centre for coronavirus patients in the northwestern city of Mardan. He died from COVID-19, the day his test results came back positive.

Khan was Pakistan’s first fatality from a disease that is rapidly spreading through the country of 220 million people. The virus has already infected over 317,000 people worldwide, and killed more than 13,000.

The number of confirmed cases in Pakistan has soared to more than 750 from 22 last week, largely driven by a wave of pilgrims returning from Iran who Pakistani authorities said were inadequately tested and improperly isolated. At least four people have died from the disease in Pakistan in the past week.

Thousands of people now need to undergo the slow process of retesting, and authorities fear the number of cases could surge in coming days.

Health experts say there is a lack of public awareness in Pakistan about the virus and that the cash-strapped government is ill-prepared to tackle its spread. A shortage of quarantine facilities and testing labs have also hampered efforts to effectively deal with high-risk cases.

In Sindh, Pakistan’s hardest-hit province, the situation is already grim, said Dr Naseem Salahuddin, the head of department for infectious diseases at Indus Hospital in Karachi. She said that the few hospitals equipped to handle COVID-19 cases in Karachi are either close to capacity or have shut their doors because they can’t handle the influx of suspected cases.

“We’re likely to have a very big outbreak no matter what we do now,” she said. “And we will not be equipped to handle the numbers. There will be breakdowns at many levels.” Better border controls and quarantine measures should have been instituted a lot earlier, she said. “I think the cat’s now out of the bag.”

Reuters interviewed three doctors involved in the case, as well as four people from Khan’s village, and reviewed medical case notes detailing his travel history. Together, they provide a picture of Khan’s last days, and illustrate why the South Asian nation is rapidly becoming the latest hotbed of the fast-spreading disease.

In late February, Khan flew to Saudi Arabia to visit the holy city of Mecca for Umrah, a religious pilgrimage performed by millions of Muslims from across the world each year. Khan entered the country just before it shut its borders to Umrah pilgrims, in a bid to stem the spread of COVID-19.

Khan was in Saudi Arabia for two to three weeks, according to the doctors handling his case and an acquaintance from his village.

At least two people who knew Khan said he was already ill when he got on the plane and needed assistance on arrival in Pakistan.

Despite Pakistan having identified its first confirmed cases of COVID-19 two weeks prior, the case notes state Khan was only asked to fill out a form and did not undergo a medical screening at the Peshawar airport.

Khan did not mention any illness, and he would have escaped detection anyway if he had taken fever suppressors, said a Peshawar airport official who asked not to be named.

Authorities are also scrambling to trace dozens of other passengers on flight PK736 that night, as well as airport staff who assisted Khan.

Khan first visited a district hospital close to his village on Mar 16, complaining of cough, fever and breathing issues. The doctor diagnosed him as a potential COVID-19 patient and had him tested for the virus. The sample was sent to Islamabad for testing, according to the case notes reviewed by Reuters.

While it is unclear if doctors could have forced Khan into quarantine, the case notes indicate he refused to be isolated. Instead, he went home, where he lived with his wife, three sons, two daughters-in-law, three daughters and four grandchildren.

Hospital officials say Khan returned on Mar 17, when his symptoms intensified. On Mar 18, test results confirmed he was infected with COVID-19, and he was moved to an isolation centre, where he died the same day.

It is the events before his death, though, that have worried medical officials and alarmed many residents of his village.

On Mar 9, Khan was greeted with a mass gathering in his village, as is traditional in Pakistan when someone returns from Umrah. According to local authorities, some 2,000 people were in attendance at the lunch – most of whom embraced Khan.

Khan also ran a popular “medical clinic” in his village – though he wasn’t a qualified doctor, say local health officials.

As is the case in many rural areas of Pakistan, people with just rudimentary medical knowledge often run such dispensaries to treat patients with ailments like fevers and colds, despite not having any qualifications.

Khan had not resumed his practice on returning to Pakistan, but his sons ran it for him while he stayed at home in “self-quarantine,” health officials from the village told Reuters.

However, they added, the “self-quarantine” involved his sons staying in the same room as him. The sons in turn also tended to dozens of patients at their father’s clinic during that period.

Reuters was unable to speak with anyone in Khan’s family.

There is mass panic in the village, local residents told Reuters via phone, adding that no one had taken the coronavirus threat seriously prior to this.

“There are hundreds of people believed to have been infected but they are hiding and reluctant to go to hospital,” said Liaqat Ali Shah, a local social worker, adding that villagers feared being ostracized by the community and shunned by healthcare workers.

The village, Union Council Mangah, was locked down following Khan’s death, according to an official directive from authorities.

A complete lockdown was ordered “with immediate effect and there shall be no entry and no exit,” the order seen by Reuters read.

The village of about 7,000 people, has been declared a mass quarantine zone, according to the provincial government, and testing has begun.

But residents of Mangah say none of the officials surveying the area have testing kits with them.

A medical worker on the ground said test kits were limited so they couldn’t test everyone and were only testing patients displaying symptoms.

Despite this, at least four people showing symptoms, including two members of Khan’s family, are now missing and have gone underground, health officials told Reuters.

All four had tested positive for COVID-19, the officials said.