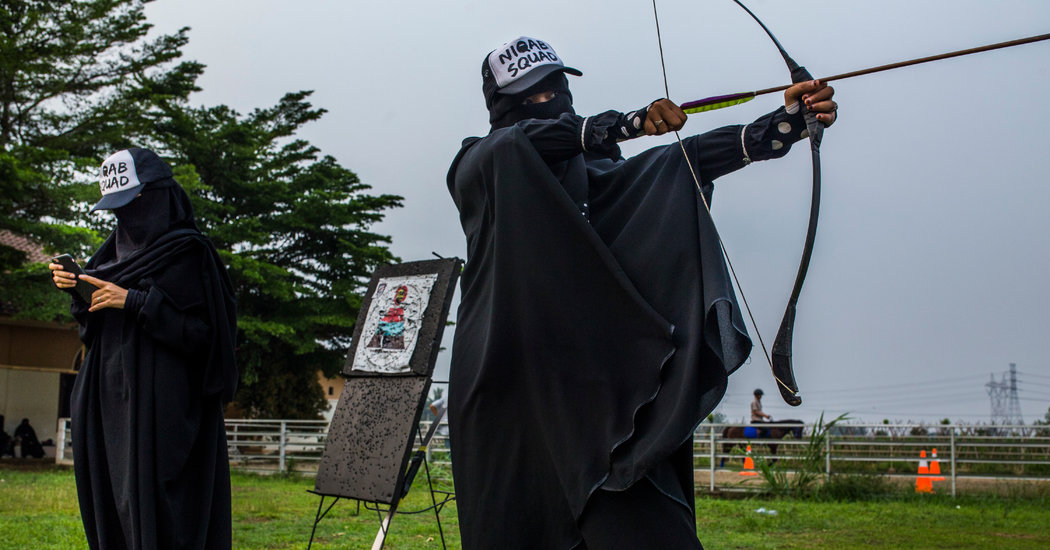 TEMBORO, Indonesia — Only the rider’s eyes were visible from behind her black face veil. With a bow in her left hand and an arrow in her right, she cantered her horse toward a target, aimed quickly and let fly. The arrow struck home with a resounding pop.

The rider, Idhanur, who like many Indonesians uses one name, is a 31-year-old teacher at an Islamic school in East Java who says that firing arrows from horseback while wearing her conservative veil, or niqab, improves her chances of going to heaven.

Ms. Idhanur is part of a growing, peaceful movement of Muslim women who believe they can receive rewards from God through Islamic activities like wearing a niqab and practicing sports that the Prophet Muhammad is thought to have enjoyed.

Many also say it offers protection from prying eyes and harassment by men in a country where unwanted sexual advances are common.

Ms. Idhanur, who teaches at Al Fatah Islamic Boarding School of Temboro, part of the revivalist Tablighi Jamaat movement, has an answer for Indonesians who fear that conservative Islamic dress is a troubling step toward extremism and the marginalization of women.

“Even though we are wearing a niqab like this, it doesn’t mean that we become weak Muslim women,” Ms. Idhanur said after dismounting. “We can become strong Muslim women by participating in archery and horseback riding.”

Indonesia, a democracy that has the world’s largest Muslim population, is officially secular and has long been known for tolerance. But in the 22 years since the dictator Suharto was ousted, the country has turned increasingly toward a more conservative Islam.

Conservative clerics, such as Indonesia’s vice president, Ma’ruf Amin, have gained a more prominent role in public life. And local governments have enacted more than 600 measures imposing elements of Shariah, or Islamic law, including requiring women to wear hijabs — a catchall for head scarves — to hide their hair.

A small minority of Muslims have embraced extremist views and some have carried out deadly bombings, including the 2018 Surabaya church attack that killed a dozen bystanders. One suicide bomber was a woman, prompting many Indonesians to be wary of women who wear niqabs, a more conservative face veil where the only opening is a slit for the eyes.

Concern that the niqab is associated with terrorism prompted Indonesia’s religious affairs minister, Fachrul Razi, a former army general, to call for a ban on employees’ and visitors’ wearing niqabs in government buildings.

He fears that some government workers are being attracted to extremist thought and sees the niqab as a sign of radicalization. His regulation has yet to be adopted. A 2018 ban on niqabs at a university in Central Java lasted only a week before opposition compelled the university to rescind it.

But Sidney Jones, a leading expert on terrorism in Southeast Asia, said it was important to distinguish between radical Islamists who pose a threat and followers of conservative Islamic groups who promote a traditional Islamic lifestyle, such as the proselytizing Tablighi Jamaat sect.

“Because of their dress, they are often confused with extremists,” said Ms. Jones, director of the Jakarta-based Institute for Policy Analysis of Conflict. “But they are against violence. It’s a great example of a movement where dress can be totally misleading.”

Unlike at the male-dominated Al Fatah school, where women and girls as young as 5 are required to wear the niqab, thousands of mainly urban, middle-class women have made that choice for themselves.

Leading the way is Indadari Mindrayanti, a clothing designer, who founded the Niqab Squad four years ago to promote wearing the veil. It now has nearly 6,000 members with chapters across Indonesia and in Malaysia and Taiwan.

“We really want to go to heaven, and so we sacrifice,” Ms. Indadari explained at a Niqab Squad equestrian and archery event near Jakarta. “Part of our sacrifice is not showing our beauty and covering our body in an Islamic way.”

Many are followers of a movement known as Hijrah, which embraces self-improvement through adopting a traditional Islamic lifestyle.

The peaceful, born-again movement, named Hijrah after the Prophet Muhammad’s seventh-century exodus to the city of Medina, is propelled today by social media, where popular actors, actresses and other celebrities post about joining Quran study groups and becoming more religious in their daily lives.

Like Tablighi Jamaat, the squad aims to popularize the face veil but the groups are not affiliated.

Ms. Indadari designs a line of fashionable niqabs and other Islamic clothing for women, often with distinctive white-polka-dot trim.

She said that when she encounters people who seem afraid of her, she counters their fears by acting overly friendly.

“At first, my family was afraid,” she recalled. “They said, ‘People will think you are a terrorist. They will think that you are joining a deviant sect.’ But as time goes by, they understand. I explain that all the wives of the Prophet wore a niqab.”

The reach of Indonesia’s born-again Islamic movement is evident in the hot, dusty town of Temboro, about 330 miles east of Jakarta.

The Al Fatah school, with eight campuses and 25,000 students from first grade through university, dominates the town.

When classes let out, the streets are filled with thousands of young people in traditional Islamic garb — men and boys in high-cuffed trousers or loosefitting robes and women and girls in shapeless gowns, head scarves and niqabs.

Temboro is often called Indonesia’s Medina, after the city in Saudi Arabia where Muhammad is entombed. One school mosque is modeled after Medina’s famous green-domed mosque. The town shuts down five times a day at prayer time.

“Here we implement Islam in our daily lives,” said Ainul Hadi, a doctor who moved to Temboro in 1996 and has seen Islam’s influence grow. “People can feel the atmosphere of Medina here.”

At Al Fatah, the height of academic achievement is memorizing the Quran. The most successful students become teachers and open schools themselves.

The school disdains contemporary dress and vaccines. But there are some concessions to modernity.

Some women wear glasses over their niqabs and sneakers on their feet. Cellphones abound and motorbikes are popular with both women and men.

But for Aisyah Tajudin, 25, wearing a niqab is not enough. She also wears black gloves and a black mesh over her eyes, so that every inch is covered.

She says that being exposed to men in public could lead to unwanted male attention and that having even her eyes visible made her uncomfortable.

“I feel more freedom in this,” she said.

She is not alone. Many young women at Al Fatah wear the mesh and it doesn’t prevent them from hopping on their motorbikes and driving around.

At Al Fatah’s elementary school for girls, students begin wearing the niqab at 5.

On one recent day, the school’s 660 students, all wearing niqabs, formed circles on the playground and joined halfheartedly in singing “If You’re Happy And You Know It” in Arabic as the song blasted over loudspeakers at earsplitting volume.

Afterward in class, they turned to the serious work of studying Muhammad’s life in Arabic and memorizing the Quran.

Ms. Idhanur, the rider and archer, first came to Al Fatah when she was 13 and began wearing a niqab then. She hasn’t stopped since.

“When I started here, it was really rare to see women and girls wearing a niqab,” she said. “But now there are many of us.”