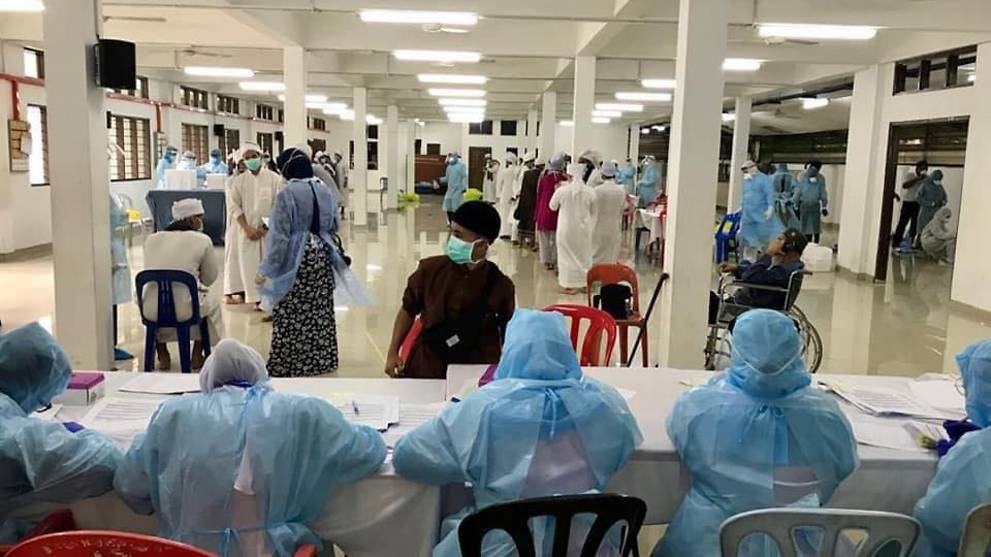 PUTRAJAYA: The Malaysian government will channel additional funds worth RM600 million (US$135.28 million) to the Health Ministry to support its efforts in combating COVID-19, said Prime Minister Muhyiddin Yassin on Monday (Mar 23).

Speaking during a televised press conference, Mr Muhyiddin said the additional funds will be used to purchase equipment like ventilators and personal protective equipment (PPE) for medical staff as well as to beef up manpower.

He added that the government has approved the funds so that the critical purchases may be done quickly.

“Many nurses and hospital staff are exhausted during this period because they are forced to work day and night to test individuals for COVID-19 and treat those who have been confirmed positive,” said Mr Muhyiddin.

“I hope that that the appointment of more staff can be done as soon as possible so that all hospitals have enough manpower to combat the spread of COVID-19,” he added.

Moreover, the prime minister announced that the government has allowed Malaysians below the age of 55 to withdraw from their employee provident fund (KWSP), up to RM500 every month for 12 months.

He said that the money may be used by Malaysians whose livelihoods have been impacted by the movement control order announced by the government to combat COVID-19.

The Malaysian government had earlier imposed the movement control order for two weeks from Mar 18 until Mar 31 to curb the spread of COVID-19.

As part of the order, Malaysians are barred from travelling overseas while visitors are not allowed to enter the country. It also involves the closure of all government and private premises except for those providing essential services.

All houses of worship and business premises are also closed except for supermarkets, wet markets, grocery shops and convenience stores selling daily necessities.

The government has also called on the public to stay at home and avoid going out during the order period to prevent the spread of COVID-19 in the country.

During his press conference, Mr Muhyiddin advised Malaysians to use the money wisely.

“Buy necessities that you require only during this difficult period. Importantly, ensure that there is food on the table for your family every day. Perhaps some of the money may be used to pay for water and electric bills or house rentals,” he added.

In addition, Mr Muhyiddin also announced that a total of RM130 million will be set aside equally to each state so that the respective state governments can use the funds to help small businesses affected by the pandemic. The money will also be channeled to patients who have tested positive for the virus and their families as well as assist state officials involved in handling the crisis.

He added that the same amount will be given to each state, regardless of political affiliations of the state governments.

“The crisis we are facing affects all Malaysians, regardless of race, religion or political ideologies,” he stated.

MOVEMENT CONTROL ORDER EXTENSION TO BE DECIDED NEXT WEEK

In response to queries from journalists at the press conference, Mr Muhyiddin said that the government had not yet decided if the movement control order, which ends on Mar 31, will be extended.

He said that the COVID-19 situation in Malaysia has improved since the order kicked in. However, the authorities will observe the overall picture carefully before making a decision, said the prime minister.

“Whether we extend the MCO or not depends on whether there is progress in the steps taken by the Health Ministry and whether the number (of infections) come down,” said Mr Muhyiddin.

He added that the National Security Council may decide on Mar 30 on whether any extension will be put in place.

In response to another question, Mr Muhyiddin added that the government was working with face mask manufacturers in Malaysia to ensure that the stock of face masks are sufficient and are being sold at fair prices.

He noted that some manufacturers were having problems obtaining raw materials, especially those that are imported. But he remained optimistic that two to three million face masks will be produced in Malaysia each month.

As of Monday morning, Malaysia’s COVID-19 death toll was 11 and it reported more than 1,300 positive cases, making it the hardest-hit country in Southeast Asia.