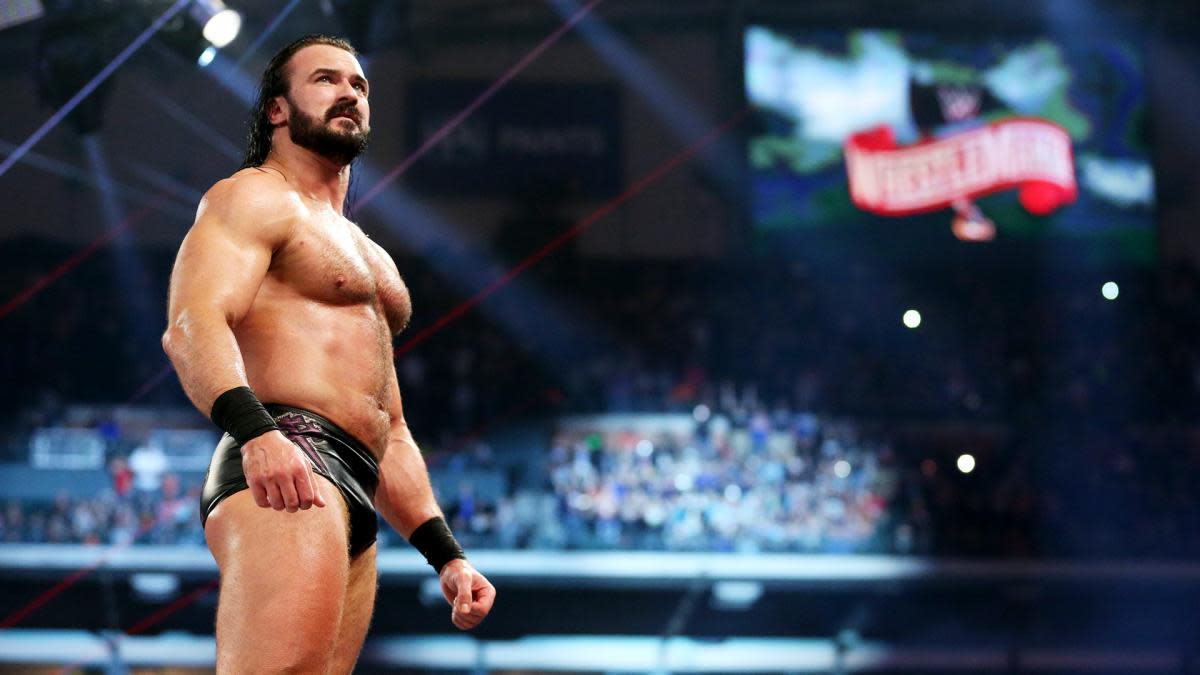 Drew McIntyre gets his shot at carving his name in WWE history when he challenges Brock Lesnar at WrestleMania 36 for the most high-profile championship in all of professional wrestling.

Per WWE tradition, McIntyre earned the right for a shot at the world title when he emerged victorious in this past January’s Royal Rumble match. He also eliminated Lesnar from the Rumble, which will forever stand as a career highlight. He celebrated his victory in front of over 40,000 people at Minute Maid Park in Houston and visions of an even grander celebration at WrestleMania—with nearly 75,000 people from around the world packing in to Raymond James Stadium in Tampa—were merely a few short months away.

But the impact of the coronavirus has turned McIntyre’s dream into a stone-cold reality. He will still wrestle Lesnar at WrestleMania, but the match will now take place in WWE’s Performance Center in Orlando in front of an empty venue.

“I’m happy and proud it’s still going ahead,” said McIntyre, hours before his Raw appearance on Monday. “It’s not what I imagined as a kid, with thousands of people. But that moment is still going to happen, and it’s very important that we have WrestleMania and give people an escape in today’s climate.”

Ever since the Royal Rumble, seemingly every reaction McIntyre has had behind the curtain has been captured by WWE cameras, which includes the emotional roller coaster of learning WrestleMania’s status was in jeopardy and then, ultimately, relocated to the Performance Center.

“It’s going to make a very interesting documentary—I’ve already said to the guy producing that this is going to be his Citizen Kane because we’ve had so many twists and turns,” said McIntyre. “When I was in Europe, I heard that ‘Mania may not happen with everything going on, and then with the switch to the PC, and with all the other sports shutting down, I am very proud of WWE for being one of the few places to bring original content to help people take their minds off things.

“I think WrestleMania is going to turn out to be more like WWE presents: Mortal Kombat, which will be a pretty cool scene. But most importantly, everyone is going to be safe and we’ll provide an escape for everyone in the world. This ‘Mania is never going to be forgotten.”

Standing 6’5” and weighing 272 pounds, McIntyre appears to be far more Goliath than David. Upon deeper look, which requires peering into the soul of Andrew McLean Galloway IV, that could not be further from the truth.

Life has thrown curveballs and obstacles at McIntyre, who failed in his first run with WWE due to a combination of youth, arrogance and misfortune. The end of his first run in WWE also coincided with his divorce and the deteriorating health of his mother. He was released without fanfare in June 2014, which doubled as the same point that he said he ceased feeling sorry for himself and vowed to embark on a new pathway toward success.

Two major events served as key moments in McIntyre’s life, ones that have shaped the man he is today. McIntyre lost his mother, Angela Galloway, in 2012. Though it’s been more than seven years since her death, a day does not pass without him thinking of the woman who raised him. And he also met Kaitlyn Frohnapfel, developing a bond that led them to marriage in 2016. That is why he is dedicating the match against Lesnar at WrestleMania to his wife and the loving memory of his mother.

“This match is dedicated to my mother and wife,” said McIntyre. “They’re the two most important people in my entire life. My mother instilled that fire in me and taught me to never give up, and my wife has pushed me as a person and helped me fill my potential as a man.”

McIntyre lovingly recalls his mother. She suffered for over 30 years from a rare condition that killed the balance portion of her brain. Doctors recommended that she not have children, which is advice she did not heed.

“She said she’d rather die than not have kids,” said McIntyre. “That’s why I am here, and the same for my brother. I’m not where I am today without my mother. The lessons I learned growing up, I didn’t even realize I was learning. She taught me to never give up. No matter if a doctor tells you that you have a disease only one or two other people have in the U.K, she kept pushing forward and never complained. I still think about her all the time, and I feel her all the time, even in the ring. She’s in my ear, my head and my heart. I would never be here now without her.”

Since WrestleMania is a two-night affair, McIntyre was asked whether his match will take place on Saturday or Sunday. He responded by stating he does not know yet, but remains optimistic that, whichever night the match airs, it is the main event.

“I don’t know where I’m positioned on the card, but I do hope it’s the last match,” said McIntyre. “I think it’s very important that the Royal Rumble winner earns that right to be last in that big title match. Roman Reigns vs. Goldberg is also a big match. I don’t think that’s going to go very long. I saw Roman getting all those tweets after he said, ‘I’m next,’ with people voicing that he didn’t have to win the Rumble to get a title shot. Realistically, he never lost the title, so I think he earned that right.

“Randy Orton and Edge have a more compelling case. Edge has been out for nine years. It’s been so personal, they’re both phenomenal storytellers, and this is an opportunity for creative people to provide some unique content. I’ve seen some of our superstars try things that didn’t work, like walk out and talk to imaginary fans. I don’t know if I’d approach it that way. With Randy Orton and Edge, I guarantee you they’re going to approach it like a movie—and they’ll thrive in that environment. But the title is not on the line, so it’s not quite the main event. This has been a 19-year journey for me, and with Brock being the beast that he is, we’re going to lay into each other. That match should, and I believe will, be last.

McIntyre was asked if he is frightened of traveling or performing during the virus, as well as if the pros of holding WrestleMania outweigh the cons.

“There are necessary safety precautions in place by WWE, and WWE is doing everything possible to make sure we are following all the recommended CDC guidelines,” said McIntyre. “And the Drew Galloway, Drew McIntyre way has never been the easy way, from situations out of my control, situations I caused myself, and now the situation that the world is going through together.”

In the same manner he learned from his mother, McIntyre will not be complaining about the hand he, WWE, or the world has been dealt. He is embracing his opportunity, undeterred that WrestleMania will not be held in front of thousands of people at a football stadium in Tampa. Or that it will take place in an empty arena while the world continues to protect itself from coronavirus.

“I’m going to tell my story at WrestleMania—I am David, but when I kick it into gear, I’m Goliath,” said McIntyre. “My journey in wrestling and life has prepared me to be the number one guy in WWE. The world is now being presented with this difficult situation, and I am the guy to carry the load for WWE.

“It’s not what I pictured, but I’m very proud to represent during this time and keep a positive message for everyone. We’re going to keep pushing forward as long as we can, as long as it’s safe, to keep entertaining everybody. And this isn’t just my moment. This is a moment for all wrestling fans to have together.”