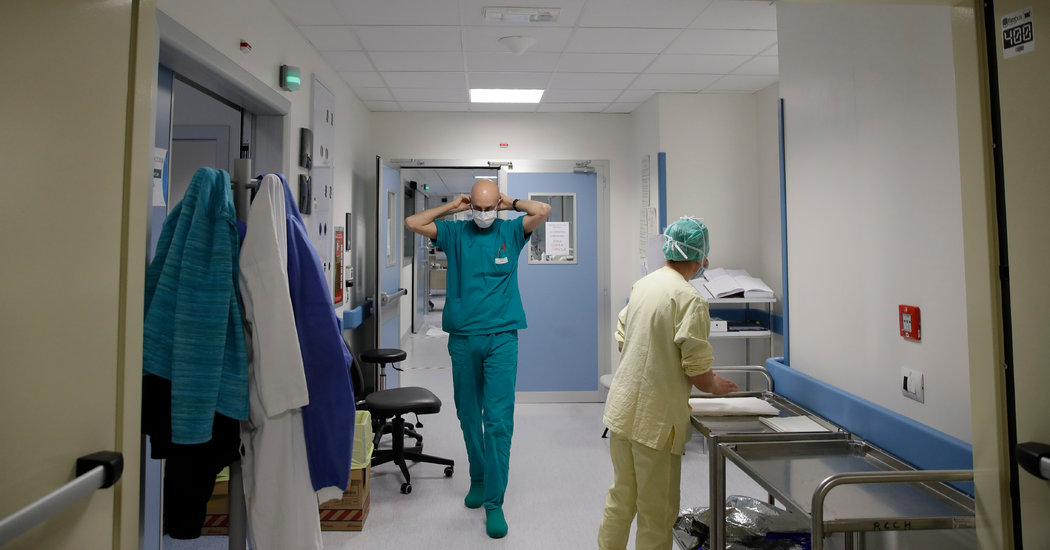 ROME — The patient had won national swimming championships in his youth but now had a lot going against him. As he waited for a kidney transplant, doctors in the northern Italian town of Brescia discovered he had heart disease and had contracted the coronavirus. But what ultimately killed him this month was the decision to give his ventilator to a younger coronavirus patient who had a better shot at survival.

“He died the next day,” said Dr. Marco Metra, the chief of cardiology at the University and City Hospitals in Brescia. “If a patient has a low likelihood to benefit from the hospital, we have to not accept them. You send them home.” He added, “This is also what I am seeing every day.”

This is the nightmare situation for doctors throughout the northern Italian cities at the center of the global coronavirus pandemic. It is also one facing the countries lagging only days behind Italy in the progression of the pandemic, including the Spain, France, Britain and the United States.

Two weeks after the Italian government took strict measures to lock down the country, officials announced on Monday that, for the second day in a row, the number of new cases and deaths had declined.

The number of patients in the hospitals in Lombardy, the region that is by far the hardest hit in Italy, had gone down as well, to 9,266 from 9,439.

“We can say that today is the first positive day,” said Giulio Gallera, Lombardy’s leading health official. “It’s not the moment to sing victory, but we finally see light at the end of the tunnel.”

But the first indications of a flattening of the deadly spike in the contagion have not arrived soon enough for hospitals in the hardest-hit regions that remain swamped and await a return to relative normalcy.

The intensive, and lengthy, treatment required to heal hospitalized patients with the virus means that will not happen anytime soon. Many of those who have died with the virus were infected weeks ago, before restrictive measures went into place.

The same is true for many of the patients who are still being treated, from those being monitored with less serious symptoms to those whose heads are encased in plastic bubbles filled with oxygen. The worst cases are unconscious and on respirators.

Many of them take an average of weeks to heal. So the new cases, even if they are fewer, are still added to a bottlenecked system already at capacity.

In the meantime, patients who can stay at home are urged to do so, while others requiring intensive care are being flown to other regions or countries by military aircraft. And doctors in the hardest hit parts of Italy, and other official voices elsewhere, say the road is narrowing to increasingly wrenching choices.

In Spain, Fernando Simón, the director of Spain’s national health emergency center, said last Friday that some emergency wards needed to apply restrictions for admitting patients, because they were saturated. On Monday, New York City’s mayor, Bill de Blasio, issued a similarly dire warning for his city, predicting that if hospitals did not get more ventilators this week, the number of deaths would spike.

In Europe, the shortage of respirators has had tragic consequences. On Sunday, the Spanish sports director of a Honda motorcycling racing team, Oscar Haro, released a video in which he said that his father had died after not being given a respirator. Both of Mr. Haro’s parents tested positive last Monday for coronavirus, he said, but his father was taken to the hospital while his mother was kept quarantined at home.

“I cannot understand how a person like my father who had been working since he was 15, paying into the system, died because there are no respirators, because they could not treat him anymore,” Mr. Haro said. He blamed the Spanish authorities for failing to prepare adequately, even after witnessing the spread of the coronavirus in China and Italy. “We are allowing to die a generation that built this country.”

Northern Italy has been on war footing for weeks.

“We are far beyond the tipping point,” doctors from one Bergamo hospital wrote in a paper published in a journal from the New England Journal of Medicine over the weekend, saying that 70 percent of their intensive care unit beds were reserved for coronavirus patients with “a reasonable chance to survive.” Older patients, they said, “are not being resuscitated and die alone.”

The near collapse of many of the region’s hospitals, and the dearth of mechanical ventilators, oxygen and personal protective equipment, has led many doctors to urge patients to stay away. They argue that overloaded hospitals increasingly seem to be sources of contagion, and that infected but asymptomatic ambulance workers sent to retrieve patients in their homes are actually spreading the virus.

In recent days in the area around Bergamo, the families of patients visited by ambulances said that health workers urged them to stay home despite their bad symptoms. Given that everyone is supposed to be in a form of isolation anyway, heavily infected areas like Bergamo have now essentially moved beyond testing.

“Right now in Lombardy the contagion is so widespread that we should consider every person potentially positive,” said Roberto Burioni, a prominent virologist at the San Raffaele University in Milan.

“At this point in Lombardy swab tests are on the back burner,” he added. ‘‘The only way to interrupt the epidemics is to imagine that every single person, regardless of the test, can be infective.”

Pier Luigi Lopalco, an epidemiologist at the University of Siena, estimated that the total number of infected is “10 times higher” than the one reported to the country every evening at 6 p.m.

Luca Zaia, the president of Veneto, another northern region hit hard by the outbreak, warned that any country facing the outbreak needed to prepare, and said that Americans should “buy all the mechanical respirators possible to save the lives of these patients.”

He said the experience had taught Italy that coronavirus patients “are enormous consumers of oxygen” and that all of that compressed oxygen gas had led to the tubes freezing. “You can have a hospital full of reanimation beds, but if the tubes aren’t adapted, everything freezes,” he said.

At the Papa Giovani XXIII hospital in Bergamo, Dr. Ivano Riva said that for now he and his colleagues had not deprived care to anyone who could have benefited from it.

“The important thing is not to arrive at that point,” he said, adding, “No one wants to decide who lives or dies like God.”

He said 26 people on his hospital’s medical staff of 101 were out of work with the virus.

In Brescia, the hospitals have been reporting at least 350 new cases a day, Dr. Metra said Saturday. Between 10 and 15 percent of the doctors and nurses are now out sick with the virus, he said. And since the most serious virus patients require at least two weeks of hospitalization, practically the only patients who have left the hospital are those who have died.

At times, he said, his hospital has been forced to choose among multiple patients with a decent chance of survival in order to use its limited resources — mainly ventilators and the trained nurses to run them 24 hours a day — to save only a few of them.

“We try to be very selective,” he said, adding that those with a low chance of survival received morphine directly.

At 8 a.m. on Friday, Dr. Metra said, doctors at the hospital had concluded that a coronavirus patient who had recovered from a heart attack 15 years ago met the criteria for a ventilator. But by 7 p.m., the chief anesthesiologist had been unable to locate one and so the patient was put on a less intense form of breathing support.

“We don’t have the capacity,” he said. “When all the ventilators in the hospital are in use, you have to make these choices.”

Routine procedures, such as taking a patient’s blood pressure, which in the past took only a minute, now take half an hour because of precautions. And the consequences of not taking those precautions, especially between patients, was all too apparent.

“We have lost some patients just because their bed was close to a sick patient and we did not know that he was Covid positive,” he said, referring to the coronavirus. “You have these patients who came to the hospital one week ago to be treated for something else and they were infected and now they are sick. That is the way that our unit became all Covid positive.”

Giacomo Grasselli, who is the coordinator of the intensive care units throughout Lombardy, said in a recent interview that an increase in cases would require doctors to prioritize “those with the best chance for survival.” But there were also basic decisions a doctor should always make on who could benefit from care, and when it is futile.

“My father is 84 and I love him very much,” but it would be irresponsible, he said, to make him go through the invasive procedures of an I.C.U.

Earlier this month, Dr. Marco Vergano, a 45-year-old anesthesiologist based in Turin and chairman of an ethics committee for his medical specialty, worked late over four nights to draft emergency recommendations for Italian doctors allocating scarce beds among a soaring load of patients.

The limited supply of ventilators and nurses forced a deadly calculus, Dr. Vergano said. “Many patients were coming in and you are not able to discharge any patients,” he said. As the beds fill, “you can admit more patients only with the death of a patient,” but “if a patient dies in a few days, probably that was a patient who did not deserve to be admitted. You are wasting very scarce and precious resources.”

He said doctors in the country’s hot zone of infections were already focusing on the needs of the total community, a recommendation made in the New England Journal of Medicine paper by the Bergamo doctors.

“If you admit an 82-year-old with hypertension, in a situation where you have two or three patients waiting outside your I.C.U. who have many more chances of survival that you cannot admit because your I.C.U. is full, then it becomes really inappropriate, or I would say, immoral,” he said.

The recommendations were immediately attacked by officials of the main Italian medical association, many of them outside the hardest-hit areas, who criticized the guidelines as discriminatory against older patients. But Dr. Vergano said he received support from doctors on the front lines, as well as requests for translations from doctors in other countries.

“They were expecting the same destiny,” he said. “Probably with less resources.”