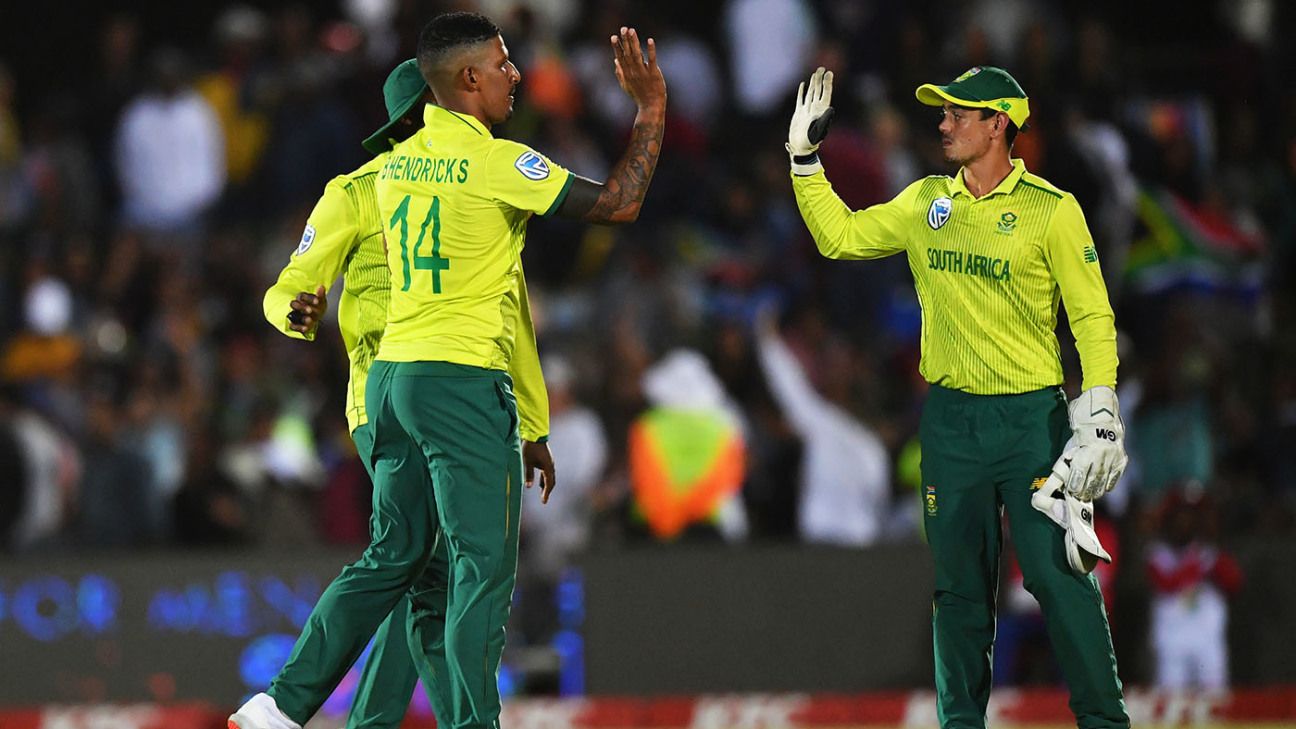 Beuran Hendricks, the left-arm seamer who made his Test and ODI debuts for South Africa in the past season, is the only new name on the national men’s contracted player list for the 2020-21 season. Meanwhile, pacer Nadine de Klerk, who was part of South Africa’s squad at the T20 World Cup earlier this month and wicket-keeper Sinalo Jafta have been added to the women’s national contracted squad. Both lists include the same number of players as least season – 16 men and 14 women – with the option of a 17th men’s player being contracted through the season.

Anrich Nortje, Rassie van der Dussen and Dwaine Pretorius are all examples of players who did exactly that. The trio were not originally named on the 2019-20 contract list but were upgraded over the course of the previous summer by virtue of the number of matches they played for the national side.

All three have been contracted for the 2020-21 season. Top-order batsman Theunis de Bruyn has been dropped from the men’s contract list, while Dale Steyn, who remains available in white-ball formats, has been excluded and Hashim Amla and Vernon Philander have retired. Offspinner Raisibe Ntozakhe and allrounder Zintle Mali are the two women’s players who no longer have contracts.

Faf du Plessis, who stood down as Test and T20 captain last month, has been re-contracted and remains available to play for South Africa in all formats suggesting his retirement is at least a year away. Du Plessis was part of the ODI squad that traveled to India earlier this month and has committed himself to his role as a senior player and in assisting his successor. While Quinton de Kock has taken over as white-ball captain, South Africa have yet to name a Test captain.

Contenders are believed to include de Kock, Temba Bavuma and Aiden Markram who remains on the contracted player list despite missing most of last season on the sidelines. Markram broke his wrist during the October Test series in India, a self-inflicted injury caused by “lashing out a solid object,” after bagging a pair in India. He recovered in time to play the 2019 Boxing Day Test against England but fractured a finger in the match, ruling him out of the rest of the summer’s internationals. Markram returned for his franchise, the Titans, in late February and scored two hundred in six one-day cup matches before the competition was suspended.

Markram’s replacement at the top of the order in the Test XI, Pieter Malan, has not been contracted. Neither has his brother Janneman Malan, who scored a century while opening the batting in his second ODI. Also missing from the list are Heinrich Klaasen and JJ Smuts, who have both been part of South Africa’s white-ball squads this summer and have both had decent returns, and Zubayr Hamza, who played in the Test team. However, all of them have the opportunity to earn a contract in the coming season.

South Africa’s men’s team has a busy schedule and are due to play away tours in Sri Lanka (white-ball) and West Indies (two Tests, five T20s) between May and August, although the future of those trips will hinge on the impact of COVID-19, which has already seen two men’s ODIs in India postponed. That will be followed by the men’s T20 World Cup in Australia and the home season, which sees visits from Sri Lanka (Tests), Australia (Tests), Pakistan (T20) and India (T20). The women’s team is due to travel to West Indies and England over the winter – tours that may prove unlikely – and will then turn their attention to the 2021 ODI World Cup.

They automatically qualified for the event before their home series against Australia, due to take place this month, was forced to be rescheduled because of the ongoing pandemic.

Last Monday, all activity in South African cricket was put on hold for 60 days, after South Africa’s president Cyril Ramaphosa declared a state of disaster as a result of the coronavirus. Although the impact on the season has been minimal – with the semi-finals and finals of the one-day cup and two rounds of first-class cricket unable to be completed – it does mean that off-season camps, aimed to upskill South Africa’s cricketers, will have to wait.

Behind-the-scenes, CSA are continuing to plan for next summer and now that the central contracts have been announced, the six domestic franchises are expected to finalise their player pools in the coming week.