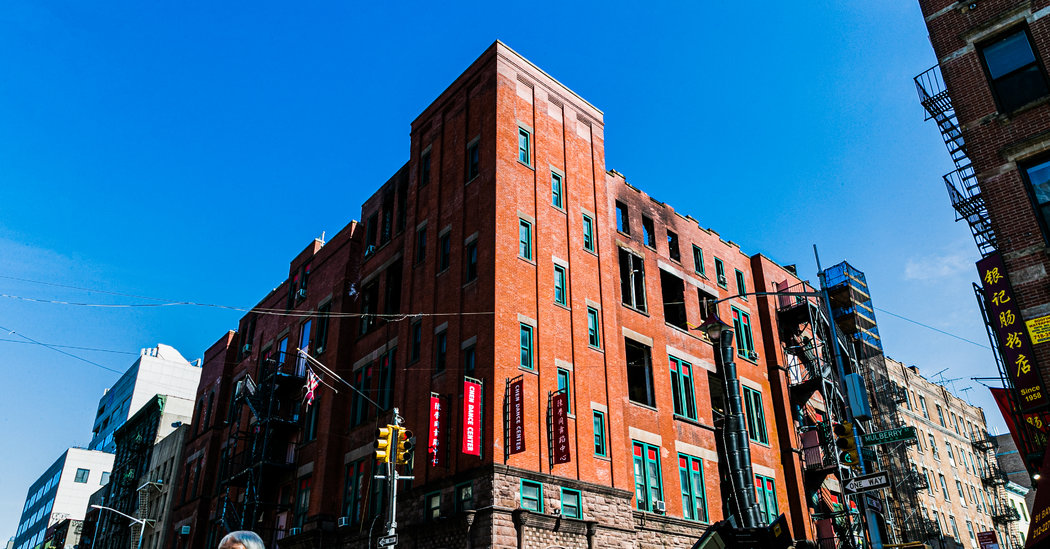 When a fire ripped through the upper floors of the red brick building that held the archives of the Museum of Chinese in America, the staff thought that all was lost.

The second floor of 70 Mulberry Street, a 130-year-old building that is a cherished cultural landmark in Chinatown, had been home to 85,000 items that helped tell the story of more than a century of Chinese-American history and culture. There were signs from long-shuttered Chinatown restaurants, traditional textiles, delicate paper sculptures and the jiapu, or genealogies, of families that document traditional Chinese names over decades.

The fire started on Jan. 23 at around 8 p.m. on the fourth floor, destroying the roof of the building but leaving the museum’s collection unburned. The archives were still in grave danger: Firefighters had pumped water into the building for more than 20 hours, and museum staff members were told that no one would be allowed to enter and retrieve the items for months, leaving them to deteriorate and grow mold.

The message that went out to the community was that tens of thousands of artifacts were likely to be lost.

Nancy Yao Maasbach, the president of the museum, received frantic calls and text messages from dozens of people whose family heirlooms had been donated to the collection. The museum — which is now based on Centre Street, just a short walk from the site of the fire — has been documenting Chinese-American history since it was founded in 1980 as the New York Chinatown History Project.

“There was a groundswell of mourning,” Ms. Maasbach said. “It was like 350 family legacies had died.”

The day before a planned community march to pressure the city to save the artifacts, municipal officials informed the museum that it would be able to recover the waterlogged archives earlier than expected.

From early morning to evening on March 8, about 20 workers wearing hard hats and gas masks passed more than 2,000 boxes filled with the beloved archives from one person to the next, down the building’s fire escape and into a truck. Watching from across Bayard street, under the awning of a Cantonese noodle shop, Ms. Maasbach and her museum colleagues tried to identify the objects being saved from the wreckage.

“I think that’s a qipao!” Ms. Maasbach said, referring to a traditional Chinese dress, which was coming down in a rectangular, water-stained box.

The artifacts were taken to Rockland County, where a private company specializing in disaster cleanup will try to salvage as much as possible.

The vast majority of the archives were retrieved from the wreckage, but it is too soon to tell how much can be preserved during the monthslong process. Here are some artifacts that did survive.

There, most of the museum’s artifacts were packed tightly into a freezer truck, kept at about 18 degrees to hinder mold growth.

When the door of the truck was lifted for the staff to see inside, the director of collections, Yue Ma, hoisted herself into the container and began sifting through documents, wearing blue disposable gloves.

One of the first pieces she pried out of the densely packed boxes was from a collection of letters written by Hsin-Chih Lee and Chofeng Lin Lee, two Peking University graduates who immigrated from China to the United States separately in the late 1930s and later married in New York.

In one letter — dated Feb. 24, 1946 — Ms. Lee, who was 35-years-old at the time, asked her boss to extend her maternity leave by six months because she could not afford child care.

The baby Ms. Lee was nursing was Kai Lee, who grew up to become a scholar of environmental studies. In the early 1990s, he found a leather suitcase filled with his parents’ letters. And in 2007, after they had died, he donated much of the correspondence to the museum.

Kai Lee, 74, said the museum was interested in the letters because they offered insight into the lives of highly educated Chinese immigrants. Mr. Lee said his mother was one of the few women to graduate from Peking University in the 1930s and went on to become an employee of the United Nations Secretariat. His father graduated from college, despite having been born into a peasant family, and later worked as an editor for a newspaper in Manhattan’s Chinatown.

“When I saw the news about the fire, I notified our daughters and their husbands about this loss of the family’s legacy,” Mr. Lee said in a phone interview. “We had all grieved about it.”

The realization that the letters survived, Mr. Lee said, was a “wonderful gift.”

The legacy of a Chinese hand laundry

Tucked into a musty room at the facility in Rockland County, cluttered with artifacts that had been laid out to dry on every surface available, there was a poster-size photo of a family of four standing inside a cramped office space.

The photograph showed the Chin family in Sam Wah Laundry in 1952. The father, Quock Chin, married a daughter of the Wong family, which had purchased the hand laundry in the Bronx in the 1930s.

“They often lived, ate and worked in that space 24/7,” Ms. Maasbach said of the families who ran laundries.

In 1981 Mr. Chin was killed in an attempted robbery. The family decided to close the business and move to New Jersey. But first, his widow offered the museum the laundry’s contents in an effort to document the lives of workers like her family.

A bronze Buddha lightens the mood

Once you see it, it’s hard to look away: a smiling Buddha, clutching his prayer beads, light reflecting off his bronze exterior. The big toe of his left foot was unnaturally shiny from his past life at a Chinese restaurant, where patrons would rub it for good luck.

When Ms. Maasbach saw the Buddha sitting there, surrounded by industrial fans blowing air on his round cheeks, she immediately sent off a text.

“Buddha is getting a facial at the offsite sauna,” she texted Rocky Chin, the retired civil rights attorney whose family had donated the statue.

For decades, the Buddha sat in the lobby of Savoy Inn, a white-tablecloth establishment in Freeport, N.Y., that Mr. Chin’s aunt, Ettie Chin Hong, helped run. They believe her husband, Edward Lim Hong, acquired it on a trip to Taiwan.

After the restaurant closed and Ms. Hong moved to a senior residence in Manhattan, the Buddha followed her. When she passed away, it came to the museum.

The artist behind the figures was Xun Ye, 64, who made them from rice flour dough. When he was growing up in China, his grandfather, a famous flour figurine artist, taught him how to create the sculptures.

Mr. Ye, who lives in Manhattan, didn’t know that this piece, titled “Chinese Tea,” had made its way to the Museum of Chinese in America. Mr. Ye’s sculpture had ended up in the hands of the co-founder of the museum, Jack Tchen, who donated it to the collection.

Mr. Ye, who immigrated from Hangzhou, China, in 2000, had modeled these miniatures after a drawing of Song dynasty tea merchants that he had seen in a magazine in 1988. The merchants are arguing over whose tea is best.

To create the sculptures, he uses rice flour, salt, water, steam, honey, oil and watercolors, he explained. He shapes the figures with his hands and homemade tools.

Newspapers printed in English and Chinese

Among the piles of documents left to dry was a clipping from a Chinese-language newspaper that advertised Cantonese operas — one called “Unpredictable Beauty,” and another, “Wu Song Killed His Sister-in-Law.”

This clipping and others had survived, but the museum’s staff was particularly concerned about the fate of another item, one of the few English-language newspapers in the 1950s and ’60s that was created for a multigenerational Chinese-American readership. The museum says it is the only institution to have in its collection the entire run of the monthly Chinese-American Times, which was established in 1955 by William Yukon Chang and had catered to the English-speaking second-generation Chinese immigrants.

The museum staff was told that the newspapers had absorbed a lot of water during the fire and were considered in the worst condition of all the artifacts.

As they celebrated the recovery of archives they believed had been destroyed, the museum staff members had a nagging anxiety about the survival of newspapers like the Chinese-American Times, which chronicled the life, culture and politics of the Chinese in New York until the early 1970s.

“It’s our No. 1 worry right now,” Ms. Maasbach said, “in terms of the artifacts that could be lost.”