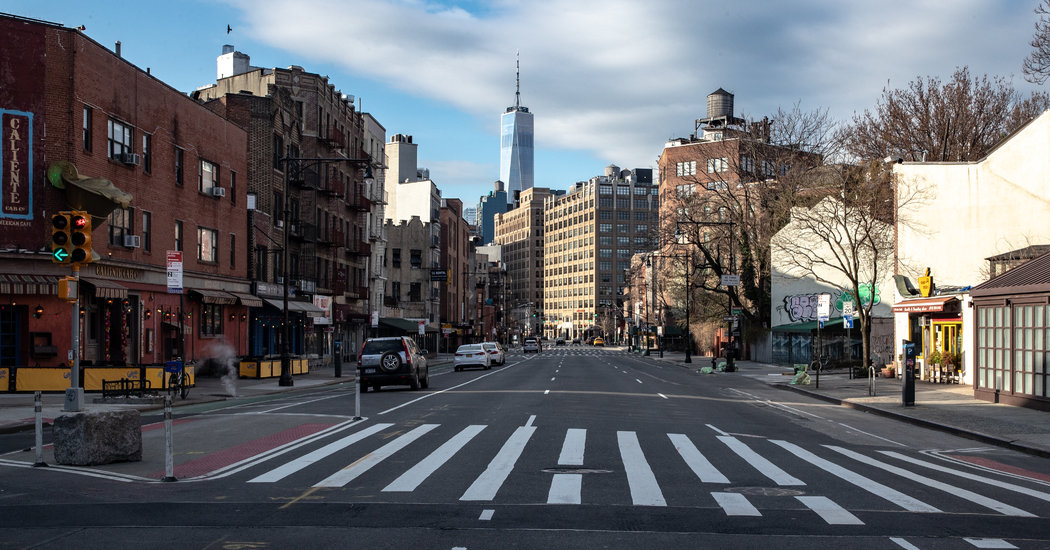 U.S. and Europe scramble to contain the coronavirus

New York State’s cases alone grew to more than 15,000, roughly 5 percent of the global total of 314,700, and leaders across the country pleaded with the federal government to use its powers to step up dwindling medical supplies.

Parts of Europe are staggering. In Spain, thousands of health workers have tested positive.

Italy has become a lesson in what not to do: The people who have died in staggering numbers recently were mostly infected a week or two ago when there were mixed messages by scientists and politicians, and when containment measures lagged behind the trajectory of the virus. There were more than 59,000 confirmed cases in the country and over 5,450 deaths as of Sunday.

The chaos there, our reporters write, showed that measures to isolate clusters and restrict people’s movements needed to be taken early, put in place with absolute clarity and then strictly enforced.

New cases and new deaths in the country were lower on Sunday than those reported a day earlier, offering a ray of hope.

What to know: The Times is providing free access to much of our coverage, and our Coronavirus Briefing newsletter — like all of our newsletters — is free. Please consider supporting our journalism with a subscription.

How the virus got out

Many of the first known cases of the coronavirus clustered around a seafood market in Wuhan, China, a city of 11 million and a transportation hub.

It wasn’t until about one month in that China notified the World Health Organization — and reassured it there was nothing to worry about. But it was already late — hundreds of millions of people at the time were going to travel for the Lunar New Year.

Thousands of travelers left Wuhan to go to other major cities, and about 85 percent of those infected went undetected, researchers estimated.

Our data journalists analyzed the movements of hundreds of millions of people to show why the most extensive travel restrictions in human history haven’t been enough to stop the coronavirus outbreak.

Takeaway: Even a perfect response may not have contained the spread — but there were holes and gaps in the global response that are clearer now. By the time Chinese officials acknowledged the risk of human-to-human transmission on Jan. 21, local outbreaks were already seeded in major cities. And international travel continued as usual for several weeks.

What to do at home

Being healthy and stuck at home right now is a best-case scenario — but that doesn’t mean cabin fever isn’t real.

Scott Kelly, a retired NASA astronaut, offered some tips from his year on the International Space Station: Follow a schedule, pace yourself with work, making sure to leave some time for fun activities — he binge-watched “Game of Thrones” twice — and go outside if you can (but with at least six feet between you and others).

Here are some other things you can do:

The coder and the dictator

Gabriel Jiménez, above, was 27 and running a start-up in Venezuela when he was approached by the government about creating a cryptocurrency.

Mr. Jiménez had spent years protesting Venezuela’s autocratic leader, Nicolás Maduro, but he believed that he could give the government what it wanted — a way to fight hyperinflation — while stealthily introducing technology that would create a measure of freedom.

He nearly paid with his life.

U.S.-North Korea: President Trump offered to help the country’s coronavirus outbreak in a letter to its leader, Kim Jong-un, according to North Korean officials. The North expressed gratitude for the offer.

Iran prisoner swap: The country released the French academic Roland Marchal, an official in the French president’s office said, in exchange for an Iranian engineer detained over accusations that he had violated U.S. sanctions against Tehran.

Croatian earthquake: Prime Minister Andrej Plenkovic urged residents to maintain social distancing, even as they reeled from the effects of a 5.3 quake that was felt across the Balkans and the largest to hit Zagreb in 140 years.

Snapshot: Above, a nurse treating patients at the Walter Reed hospital in Washington, D.C., during the 1918 Spanish flu pandemic. We looked back at a century of epidemics to give context to the current one.

Exploration: How do we talk about travel when it’s grinding to a halt? New York Times Travel is reaching out to readers to contribute to our first reader-generated “36 Hours” column.

What we’re watching: This video on Twitter. “It’s a bunch of Italian mayors and local leaders lashing out at people who are not obeying the decrees demanding that people stay at home,” writes Jason Horowitz, our Rome bureau chief, who covered the coronavirus pandemic even through his own quarantine. “I did love this.”

Listen: If Sam Gendel is playing his instrument into its own grave on “Saxofone Funeral,” then he should be pleased with what he’s found there, writes our critic.

Smarter Living: Smart speakers are most often asked to play music on command, but they can do a lot more. Here’s how everyone in the family can get the most out of them each day.

And now for some ideas on …

The coronavirus pandemic has disrupted all of the systems that keep our lives running. Add to that the pressures of work (and holding onto a job) in an increasingly precarious economy.

Those strains, felt across the world, were echoed in text exchanges between the editor of our gender initiative, Francesca Donner, and Corinne Purtill, a Los Angeles-based journalist. The two have five children between them.

Francesca: “First things first: How do you maintain a sense of control when you’re WFH? Is there a daily routine? Do you get dressed every day?”

Corinne: “All good questions. If you take away one key point from this conversation, it should be this: Put on pants. Real pants. Every day.”

That was not Corinne’s only resonant piece of advice. “Days home with small children should be approached like airplane flights with small children,” she wrote. “Whatever it takes to get through it, do it, as long as they’re safe and not hurting anyone. We’re going to have to stretch some of our rules here.”

That’s it for this briefing. Good luck, parents and children. See you next time.

P.S.
• We’re listening to “The Daily.” Our latest episode is about how two sets of twins, scrambled at birth, had their lives changed in an instant.
• Here’s our Mini Crossword, and a clue: Dominant personality (five letters). You can find all our puzzles here.
• The Instagram account of NYT Parenting, our site for evidence-based child-rearing advice, has 77,500 followers.